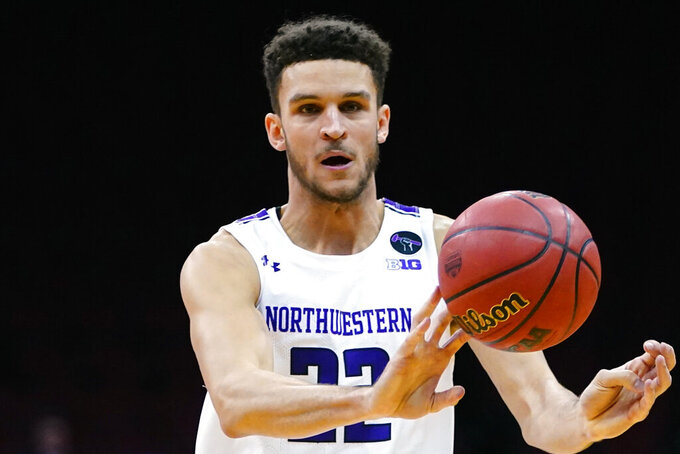 CHAPEL HILL, N.C. (AP) — Pete Nance doesn't have to wonder what a successful season could look like for him at North Carolina. He saw it illustrated perfectly in the spring.

The Northwestern transfer watched the Tar Heels blend an outside-shooting big man in transfer Brady Manek so well that the Tar Heels made an unexpected push to the NCAA championship game. That has the 6-foot-10 graduate — who led the Wildcats in scoring, rebounding and 3-point percentage last year — eager to slide right in alongside four returning starters for a team with national-title aspirations.

“A lot of the time, it's a mystery as to what you're stepping into," Nance said Monday. “But as far as seeing what Brady did and the hole he left, I think it's kind of an easy thing to see — that someone needs to step into that.”

The Tar Heels have a double-double machine and relentless rebounder in Armando Bacot in the post. They have a n NBA prospect in Caleb Love with game-changing explosiveness as a scorer. They have a veteran guard in R.J. Davis and a versatile defender in Leaky Black, who is returning for an extra year of eligibility granted all athletes due to the COVID-19 pandemic.

But they had to replace Manek, a 6-9 Oklahoma transfer who averaged 15.1 points and 6.1 rebounds while shooting 40.3% from 3-point range. That production from the “stretch-4” big man capable of pulling defenders from the basket with outside shooting created more floor spacing, a vital piece of first-year coach Hubert Davis' approach to modifying UNC's attack after Hall of Famer Roy Williams retirement in April 2021.

Nance gives the Tar Heels the potential to replace at least some of that production.

“You see a lot of similarities I guess with the shooting,” Bacot said. “Brady, he's like an all-time shooter. But Pete, he can really shoot the ball. He can score from a bunch of different levels.”

Both Bacot and Davis pointed to Davis' ability off the ball, both to create openings for teammates or to get his own shot."

“His ability to set screens and then roll, or read the defense and pop, that’s something that we need: his ability to space the floor,” Davis said. “He’s able to communicate with us and tell us, ‘Hey, let’s set this down screen real quick,’ or ‘let’s have this staggered. Let’s have an off-ball ball screen.’"

"That’s something that I’ve been impressed with recently and throughout the whole summer. His experience and his willingness to be a team player, that’s going to go a long way this year.”

Nance, who averaged 14.6 points and 6.5 rebounds last year, isn't a Manek clone. He has shot 41% from 3-point range over the past two seasons at Northwestern, though at a lower volume of attempts.

He has more length, which showed in some back-to-the-basket moves or the ability to contest shots while matching up with an opposing big man in the Big Ten. That's versatility the Tar Heels sorely needed down the stretch when Bacot encountered foul trouble or injury, such as a Final Four ankle sprain that ultimately sidelined him in the final minute of the close title-game loss to Kansas.

The Tar Heels don't need Nance to be a star. They just need him to do what he's always done before.

“Obviously there's going to be pressure,” Nance said. “We all kind of deal with pressure our whole life. It comes down to the preparation that you put in. ... I feel pretty good about it. I'm just excited to get going.”