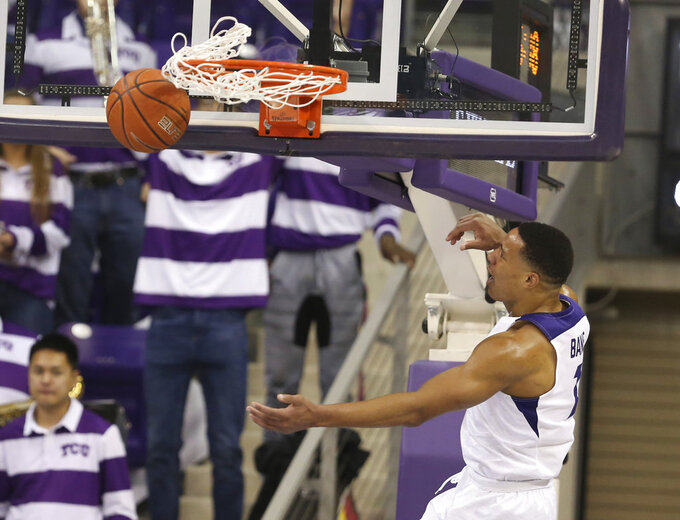 TCU guard Desmond Bane scores past Baylor on a fast break in the first half of an NCAA college basketball game, Saturday, Jan. 5, 2019, in Fort Worth, Texas. (Rod Aydelotte/Waco Tribune Herald via AP)

FORT WORTH, Texas (AP) — TCU appeared to easily be on its way to winning a Big 12 opener for the first time.

The Horned Frogs had a 19-point lead after halftime, the shots were coming easily and Baylor couldn't find a way to put together a run.

While that changed late, TCU held on to start 1-0 in the Big 12 for the first time in its seven seasons as a league member, winning 85-81 on Saturday when Alex Robinson made two free throws and JD Miller another one after Baylor had pulled within one with 18 seconds.

"We had a 19-point lead, and we let it get away. But when you go 8 for 20 from the free throw line (in the second half), things tend to happen," TCU coach Jamie Dixon said. "They were more physical than we were in the second half, clearly. We'll see what we can do about that, but certainly a great win."

Desmond Bane scored 22 points while Robinson had 18 points and 10 assists for TCU (12-1), which got its ninth win in a row behind 57-percent shooting, including 65 percent in the second half. Miller had 13 points and 10 rebounds.

RJ Nembhard, pressed into the starting lineup with starting point guard Jaylen Fisher out with a knee injury, scored 10 and also made a pair of key free throws down the stretch.

"You've got to have a short-term memory. I know I missed two earlier. I just didn't think about that, I just wanted to get the win," Nembhard said. "I'll do anything to help the team win, so I stepped up and knocked them down."

TCU still had an 11-point lead in the final three minutes, but needed the late free throws to pull out the win even while scoring at least 80 points for the sixth game in a row.

Tristan Clark scored 18 points to lead four Baylor players in double figures. The Bears (8-5) also got 17 from reserve Matthew Mayer, and Makai Mason and Mark Vital added 15 and 11, respectively. Mason had an open 3-point try to tie the game with eight seconds left that came up short.

"That was a typical Big 12 game. It comes down to one or two possessions, and credit TCU for making one or two more than us," said Baylor coach Scott Drew, who was hit with a technical foul less than five minutes into the game. "Defensively, that's the most disappointing part of the game, I would say, from the standpoint that we thought our defense was better than that. For them to shoot 57 percent, obviously we didn't show our defense's ability."

Baylor scored first but never led after a Bane 3-pointer with 17:43 to go in the first half.

Baylor: The Bears fell behind early and couldn't get enough defensive stops to put a run together until it was too late. They shot 56 percent in the second half and got as close as one in the final minute, thanks in large part to TCU going cold from the free-throw line. Baylor shot 25 percent (4 for 16) from 3-point range.

TCU: This figured to be an easy win when the Horned Frogs led 50-31 with 16 minutes left and Baylor seemingly unable to stop them. But a 20 for 34 day from the free-throw line, along with Bane not scoring for the final 14:47 as foul trouble mounted, allowed Baylor back in it. The Horned Frogs were outrebounded 33-29 and outscored 44-38 in the paint.

Baylor will return home Tuesday to play Iowa State, which is coming off a 17-point home win over No. 5 Kansas.

TCU will travel to meet No. 5 Kansas on Tuesday.