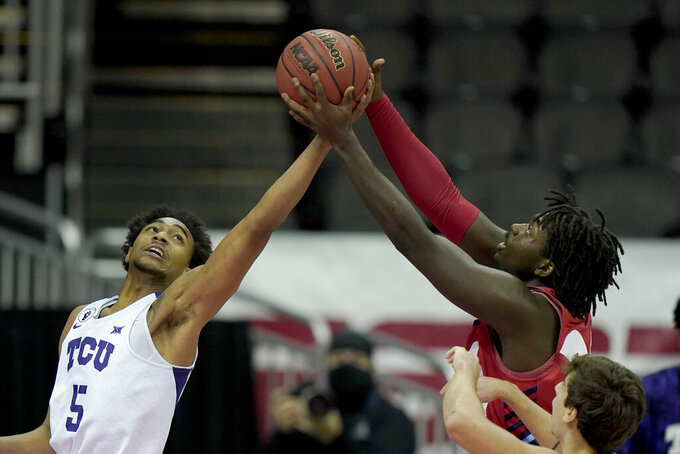 Liberty's Micaiah Abii, right, and TCU's Chuck O'Bannon Jr. (5) battle for a rebound during the first half of an NCAA college basketball game Sunday, Nov. 29, 2020, at the T-Mobile Center in Kansas City, Mo. (AP Photo/Charlie Riedel) 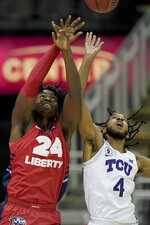 KANSAS CITY, Mo. (AP) — R.J. Nembhard scored 14 points and TCU held on for a 56-52 victory over Liberty in the championship game of the Hall of Fame Classic on Sunday.

The Horned Frogs (3-0) had a nine-point lead with two minutes left but the Flames got a 3-pointer from Darius McGhee then two baskets off turnovers generated by their press to close within four with 30 seconds remaining. A missed free throw gave Liberty the ball back with 17.2 seconds remaining but Chris Parker had his pass deflected with 2.1 remaining and the ensuing inbounds pass went off McGhee's fingers. Nembhard added two free throws for the final score.

Nembhard was only 3-of-10 shooting but 8 of 9 from the line, including two free throws that capped a 9-0 run that snapped a tie with under eight minutes to go.

Liberty (2-2) came in having made 41 3-pointers but in their fourth game in five days they were 6 of 28 from the arc. McGhee finished with 15 points but was just 2 of 10 on 3-pointers. He had nine rebounds. Parker scored 13 points.

The Flames beat Mississippi State and South Carolina in their previous two games but went to 0-7 against the Big 12 in program history.

an hour ago
By Dan Gelston 4 hrs ago
By Aaron Beard 13 hrs ago
By Richard J. Marcus 18 hrs ago
By Tommy Conmy 19 hrs ago