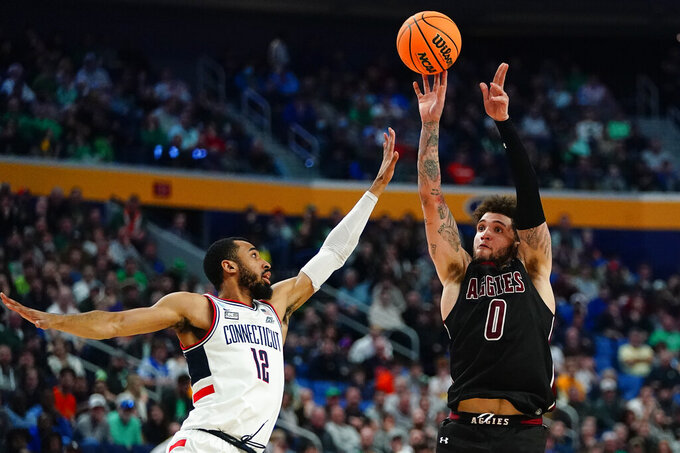 New Mexico State guard Teddy Allen (0) shoots against Connecticut forward Tyler Polley (12) during the second half of a college basketball game in the first round of the NCAA men's tournament Thursday, March 17, 2022, in Buffalo, N.Y. (AP Photo/Frank Franklin II)

BUFFALO, N.Y. (AP) — Teddy Allen picked up the “Teddy Buckets” nickname as a freshman at West Virginia for his deft scoring ability. It took him five stops in five years to finally feel at home with New Mexico State.

Just don’t make the suggestion that his journey — from Morgantown to Wichita, Kansas, as well as stops in Lincoln and Scottsbluff, Nebraska — had more stops than it should have.

“I don’t really look at it like that. I just look at it like I’m a junior,” Allen said Friday. “I’ve been at a couple of schools and this is the one that I’m at right now, and I’m trying to make the best of these opportunities. And I’m grateful for them.”

It was at that point when the Phoenix native acknowledged he finally considered Las Cruces, New Mexico, as feeling like home.

Though he was part of a Sweet 16 run with the Mountaineers in 2018, Allen introduced himself and his nickname to the nation with a 37-point outing in 12th-seeded New Mexico State’s 70-63 win over Connecticut in an NCAA Tournament West Region first-round game on Thursday. The Aggies won their first tournament game since 1993 and advanced to play fourth-seeded Arkansas (26-8) on Saturday.

On a day when two 12 seeds pulled off upsets in Buffalo, with Richmond knocking off Big Ten champion Iowa, much of the buzz was focused on “Buckets.”

Allen scored the Aggies' final 12 points in a run that began with him hitting the go-ahead basket on a rainbow jumper with 1:43 left. He became the first player to score at least half of his team’s points and make all of his free throws (13 of 13) in a tournament game.

“It was to a point where we weren’t going to rebound because it was going through the net. We were already getting back to play defense,” Rice said of Allen's hot run. “We see it every day. It’s nothing new to us. To be honest, we’re amazed just like you are every day."

Allen was named Western Athletic Conference player of the year in his first season with the Aggies. His 653 points this season are the fifth-most in school history. He initially turned down an offer to transfer to New Mexico State two years ago to play at Nebraska before abruptly changing his mind and committing to the Aggies after playing 22 games with the Cornhuskers.

His younger brother, Timmy Allen, is also in the tournament and plays for Texas, which opened with a win over Virginia Tech.

Teddy Allen's journey included being kicked off the Wichita State team before playing a game after being charged with breaking a women’s phone and stealing her keys. He spent the 2019-20 season at Western Nebraska Community College.

His cross-country travels are as unorthodox as his freewheeling style of play. No shot is too difficult for Allen to take. And no matter how many he misses, he won't be discouraged from trying the next one.

Coach Chris Jans has come to accept the good with the bad with Allen's shot selection.

Jans acknowledged not all coaches would provide such leeway in allowing a player to attempt 20 or more shots per game, as Allen has six times already this season. And there have been times when Jans has had to rein in Allen by pulling him aside or confronting him in front of the team. He's even benched him on occasion.

“I’ve had certain teams where the shots that he takes would never be allowed, but he is a special player,” Jans said. “As a coach, you have to adapt and change and take advantage of the players that you have on that particular team.”

It helps that Jans has known Allen since recruiting him out of high school.

“Teddy gets maligned sometimes. But he has been nothing but really, really good for us,” Jans said. “There’s been some bumps in the road, but I think at this point, everybody realizes the player that he is, and it makes the game easier for them. I’m really happy for him getting some national love.”

Allen plays down the attention he’s generated. Asked if he received a congratulatory messages overnight, Allen said: “Yeah. A lot. But it’s usually like that after most games.”

Allen didn’t bat an eye when informed of Jans' comments about his shot selection. More important to Allen is knowing Jans trusts him to keep trying.

“To me, it just sounds like he believes in me, honestly,” Allen said. “He pretty much said that he is willing to let me do my thing. And if it means that we can get it done then that’s what you want in a coach.”