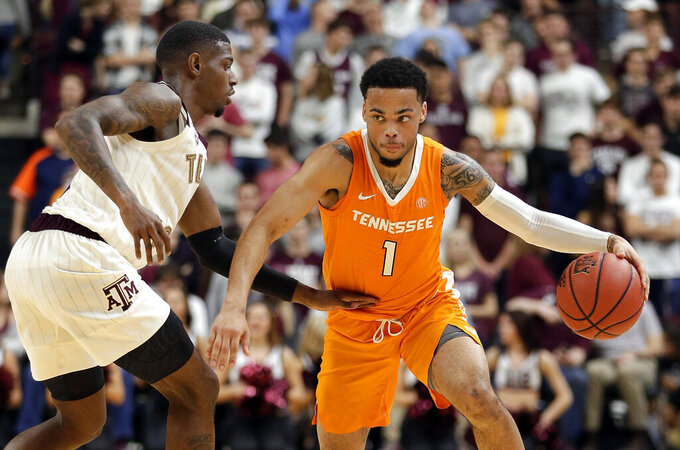 Tennessee had a couple of shaky moments after earning its first No. 1 ranking in 11 years. The Volunteers are sure rolling now.

"These guys have worked hard," Tennessee coach Rick Barnes said after the Texas A&M game. "They've really become a team. If you could've been in the huddle the last seven minutes, I didn't have to say a word. "

Tennessee (20-1, 8-0 SEC) struggled against Vanderbilt in its first game at No. 1 and got off to a slow start against West Virginia . The Vols stomped on the Gamecocks and Aggies by a combined 39 points to break a century-old school record with their 16th straight win.

"We have a long way to go," junior forward guard Grant Williams said. "We have a long season ahead of us. It's nice to set that record but we want more. We can't ever settle because if we settle or we start thinking that's all we want, we're going to drop to teams left and right."

While the top four remained the same, the top 10 became jumbled after Michigan and Michigan State lost.

The Wolverines, still undefeated two weeks ago, dropped two spots to No. 7 after losing to Iowa . The Spartans fell three spots to No. 9 following a loss to Indiana , which had lost its previous seven games. Michigan State learned last week that guard Joshua Langford would not return this season because of a knee injury.

No. 5 Kentucky, No. 6 Nevada and No. 8 North Carolina all moved up because of the losses.

A pair of losses and an epically bad shooting night bounced North Carolina State from No. 23 to out of the poll without receiving a single vote.

The Wolfpack opened the week with an overtime loss to Virginia, then fell flat in a loss to No. 10 Virginia Tech.

One of the ACC's top offenses, N.C. State was held to 24 total points, the worst output by an ACC team since the shot clock began in the 1985-86 season.

The Wolfpack made nine shots while shooting 16.7 percent, lowest in the history of a league founded in 1953.

Mississippi State was the only other team to drop from the poll, falling out from No. 22 after losing to Alabama.

Cincinnati has been on a roll lately, stretching its winning streak to seven games with a 73-68 victory over SMU on Saturday.

The Bearcats were rewarded with a spot in Monday's poll at No. 25. It is Cincinnati's first ranking since ending the 2017-18 season at No. 6.

Mick Cronin's crew has road games against Memphis and Houston this week.

Iowa was the only other team to move into the poll, re-entering at No. 20 after its win over Michigan.

Wisconsin had the week's biggest climb, jumping five spots to No. 19 after beating Maryland and Nebraska. No. 17 Iowa State and No. 22 Florida State each moved up three spots.

The biggest drop outside of N.C. State was Buffalo, which dropped five spots to No. 23 after losing to Bowling Green on Friday.