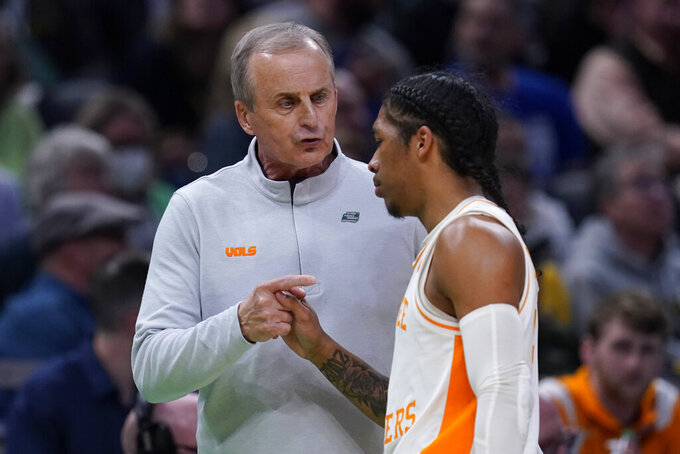 Tennessee head coach Rick Barnes talks with guard Zakai Zeigler, right, during the first half of a college basketball game against Longwood in the first round of the NCAA tournament in Indianapolis, Thursday, March 17, 2022. (AP Photo/Michael Conroy)

If the Volunteers shoot as well as they did Thursday in Indianapolis, they could be headed toward an even bigger celebration.

Santiago Vescovi scored 18 points on six 3-pointers, and Tennessee pounded Longwood 88-56 in the first round of the NCAA Tournament, showing exactly why it felt it deserved better than a No. 3 seed.

The Volunteers (27-7) shot 60% from the field and had four players score in double figures. Josiah-Jordan James had 17 points, and John Fulkerson finished with 15 on 7-for-8 shooting. Kennedy Chandler scored 13 and Zakai Ziegler finished with 10.

Next up for the Vols is 11th-seeded Michigan on Saturday. The Wolverines beat sixth-seeded Colorado State 75-63 in Thursday’s first game in Indianapolis.

“It's really fun to play this way when you know everybody on the team is just focused on winning,” said Vescovi, who went 6 for 8 from deep and finished with seven assists. “It's really fun when we start moving and everybody starts moving off the ball and on offense, too. That’s when we're playing our best basketball."

This one will be hard to top.

Tennessee wanted to show the NCAA Tournament selection committee it made a mistake by putting the Vols on the No. 3 line – even after snapping a 43-year conference tourney title drought.

Playing a first-time NCAA tourney team in front of a crowd largely dressed in bright orange, the Volunteers used their depth and defense to avoid a repeat of last year's first-round exit against Oregon State in the very same venue.

Led by Vescovi, they shot 14 for 24 from deep while producing the program's top regulation scoring total in NCAA play since a 121-86 victory over Long Beach State in 2007.

Longwood (26-7) never really had a chance to make it interesting.

“They're very talented and they move so well without the ball," said Lancers guard DeShaun Wade, who had 10 points. “For a defense like us, where we try to switch everything, that was very difficult. But then you’ve also got to really fight for rebounds and on top of that they play pretty good defense. So it’s a pretty good team, all around.”

The Big South champs, from the tiny town of Farmville, Virginia, were led by Justin Hill with 13 points. But the nation's fifth-longest winning streak ended at eight.

With 11:15 left in the first half, Tennessee only led 17-15. That’s when coach Rick Barnes tweaked the SEC’s top scoring defense, asking the Vols to switch more often.

It worked, and Barnes' team picked up its play offensively, too.

With 11:15 left in the first half, Tennessee only led 17-15. That's when coach Rick Barnes asked the SEC's top scoring defense to make an adjustment. It worked and offensively, Vols also flipped a switch, completely change the game.

Tennessee used a 10-2 run to break it open and scored the final 13 points of the half to take a 54-29 lead. Longwood never made it close in the second half, and Tennessee's starters got some extra rest.

“We were one of those teams (last year) who just thought things were going to happen. We weren’t really playing desperate," James said. “We just talked this week, leading up to the game, about being the more desperate team and knowing that every team in this tournament is a championship team so you can’t take anything for granted.”

Longwood: Coach Griff Aldrich and his players weren't awestruck by the prospect of facing the SEC's top team. But on the court, they couldn't make it close. Clearly, Aldrich has this program heading in the right direction — especially if they build on this historic run.

Tennessee: The Volunteers have reached the second weekend of tourney play in five of their last nine tourney appearances. Another regional semifinal trip won't suffice, though. Tennessee has only reached the Elite Eight once in school history, and it hopes to change that just as quickly as it did with the conference tourney title drought.

Tennessee needs a win over the Wolverines to reach the South Region semis in San Antonio, Texas.