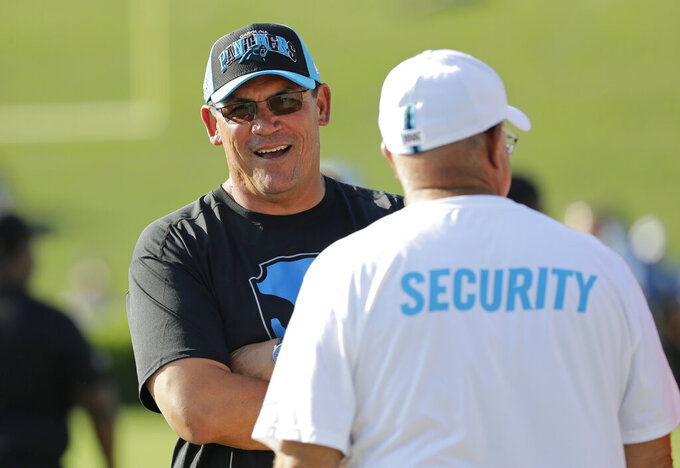 SPARTANBURG, S.C. (AP) — Panthers billionaire owner David Tepper believes Charlotte, North Carolina is destined to be the "sports entertainment capital of the Carolinas," — and he's vowing to make sure that happens.

Tepper said he Wednesday his goal is to build a retractable roof stadium in Charlotte within the next 10 years in an effort to attract major sporting events to the state, including the NCAA men's basketball Final Four and a Major League Soccer team.

"It's not idle chatter, it's something I would like to see done," Tepper said after the completion of Panthers practice at Wofford College.

"Charlotte is the center of the Carolinas and it is untapped territory," Tepper said. "We're starting to move that way."

Tepper has the means to make it happen.

He's the NFL's wealthiest owner with a net worth of more than $11 billion. He's been extremely active since purchasing the Panthers last summer for a record $2.3 billion from franchise founder Jerry Richardson.

He's in the midst of trying to land a Major League Soccer expansion team, has built a new practice bubble and team cafeteria in Charlotte and is preparing to break ground on a "world class" practice facility across the border in Rock Hill, South Carolina that includes a state-of-the-art medical center, hotels, restaurants and shops. Tepper decided to build in South Carolina after lawmakers there signed a bill May 22 giving the Panthers a $115 million tax break over the next 15 years.

Upon its completion in 2022, the facility will host training camp and in-season practices.

While the Panthers will move their headquarters to Rock Hill, Tepper wants to build the new stadium near the team's existing stadium in downtown Charlotte.

"If we can do it someplace near we are where, we can have so many people walking" to the stadium, Tepper said. "That's just a great place for a stadium. So you would like to be as close to where you are now in the future. There is different land around (the existing stadium) and we may be able to do something."

The Panthers current stadium, Bank of America Stadium, was built in 1996.

Tepper hasn't discussed his 10-year plan with either state or local government but said "if you want to take a long range plan to start thinking about this stuff, whether it is seven and eight years out, you have to start talking about it and thinking about it."

A new stadium would also likely come at a cost to taxpayers.

The Raiders, for instance, are building a new facility in Las Vegas scheduled to open in 2020 that will cost $1.9 billion, with $750,000 coming from taxpayer funding.

Tepper desperately wants to attract a Final Four to a state with a heavy college basketball tradition and includes powerhouses Duke and North Carolina, as well as North Carolina State and Wake Forest.

"How the heck can you not have a Final Four in North Carolina when Indianapolis has one all of the freakin' time?" Tepper said. "It's ridiculous. There is some pride involved here."

The new stadium would double as home to a new MLS expansion team if Tepper can land one. He and team president Tom Glick, who was hired largely because of his background with professional soccer, met with MLS officials two weeks ago to discuss the team's bid.

MLS currently has 27 teams but is looking to expand to 30, although no specific timetable has been set. St. Louis and Sacramento are also among the cities interested in an expansion team, but Tepper feels good about Charlotte's chances.

"I think (Major League Soccer) came out with a statement after (the meeting) and they mentioned St. Louis first, they mentioned Charlotte second and Sacramento third," Tepper said. "I think that put us in the conversation. So I didn't say it, they said it."

The Panthers are in their 25th year of hosting training camp at Wofford College, Richardson's alma mater.

But with the contract with Wofford set to expire after the season, Tepper said the he's considering hosting training camp in Charlotte next year while the facility in Rock Hill is being built.

"There is a bubble there (in Charlotte) and I hear it rains here (in Spartanburg) sometimes and I hear it is 100 degrees sometimes," Tepper said, then colorfully pointing out with a smile just how must he was sweating. "I've said it a million times, it's about football and making sure we are the best we can be."