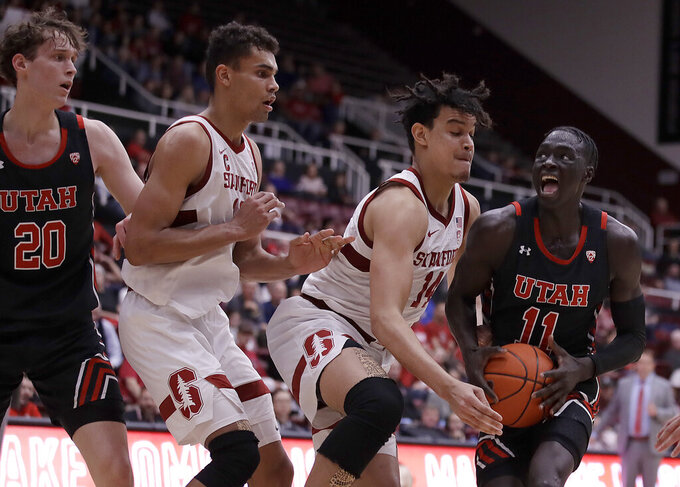 Utah's Both Gach, right, drives the ball against Stanford's Spencer Jones (14) in the second half of an NCAA college basketball game Wednesday, Feb. 26, 2020, in Stanford, Calif. (AP Photo/Ben Margot) 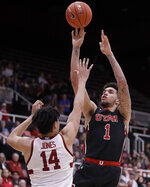 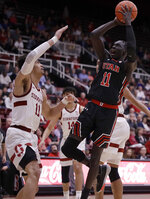 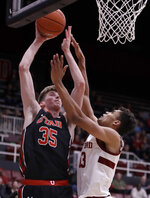 STANFORD, Calif. (AP) — Tyrell Terry couldn’t find his shot during pregame warm-ups. He made up for it during the game.

Terry scored 18 of his season-high 27 points in the second half, Oscar da Silva scored 20 and Stanford ended a four-game losing streak to Utah, beating the Utes 70-62 on Wednesday.

Jaiden Delaire scored 11 points off the bench, including a key 3-pointer with a minute to play, giving the Cardinal (19-9, 8-7 Pac-12 Conference) a six-point lead.

“We take a step forward when we play with energy,” Terry said. “We’ve had a few games where we’ve had the lead late in the second half and we weren’t able to hold it. For us to hold on tonight was positive moving forward.”

“Defensively we played hard; offensively we looked like a junior high team to start the game,” Utah coach Larry Krystkowiak said. “Give a lot of credit to Stanford with their intensity; they played like a team that was on the bubble.”

Gach hit a layup with 3 minutes remaining as the Utes cut the Cardinal lead to 63-60.

“There were a lot of things that happened,” Krystkowiak said. “You have to make plays down the stretch.”

Utah had three chances to tie the score but missed two 3-pointers and committed a turnover.

“It was not a thing of beauty, but bottom line now is survive and advance,” Stanford coach Jerod Haase said. “By the end of the game we were able to make just enough plays to get it done.”

A 14-2 run spanning both halves brought the Utes within 36-30 early in the second half.

Terry hit a pair of 3-pointers and another basket to help the Cardinal open a 50-37 edge midway through the second half.

“When you talk abut having the green light, his light is very, very green,” Haase said. “He’s a great player with a ton of room to get better.”

Stanford opened a 34-16 lead with 4:18 left in the first half but then went scoreless the rest of the way as Utah pulled within 34-22 at halftime.

Delaire connected on the only 3-pointer he attempted and it came with a minute to play, extending Stanford’s lead to a comfortable level. “It was a monster shot,” Haase said. “He has been working hard for a few weeks and stepped into the shot in rhythm.”

Utah: With the loss, the Utes can finish no higher than eighth, which means a tough road ahead in the conference tournament. While the NCAA seems out of reach, Utah can still play in a postseason tournament but will need a win or two to solidify its resume.

Stanford: Spencer Jones hit a pair of 3-pointers and has 74 on the season, matching Casey Jacobsen for the second-most 3s by a freshman. … Terry set a season-high for 3-pointers with seven.

Utah: The Utes travel to California on Saturday.