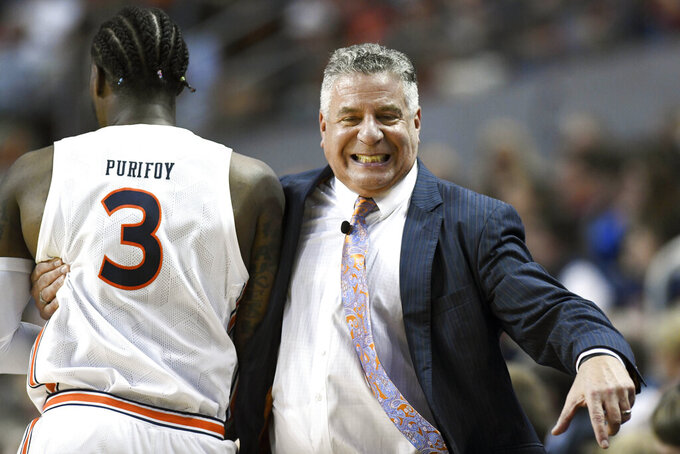 Auburn head coach Bruce Pearl catches Auburn forward Danjel Purifoy (3) before he goes into the game during the first half of an NCAA college basketball game against Texas A&M Wednesday, March 4, 2020, in Auburn, Ala. (AP Photo/Julie Bennett) 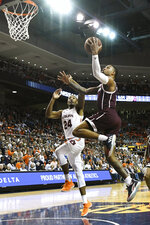 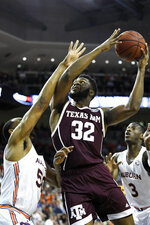 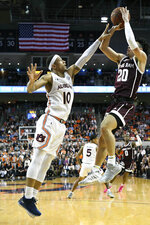 Josh Nebo scored 17 of his 19 points in the second half and the Aggies survived a frenetic last-minute rally attempt to upset the 17th-ranked Tigers 78-75 on Wednesday night.

“Every game that it seems like that we’ve won have been one- or two-possession games," Texas A&M coach Buzz Williams said. “I guess because we’ve had so many reps at that, there’s maybe a little bit more calmness than you would think.

“Still a lot of anxiety. We didn’t execute very well. They did some really good things, but without sounding arrogant those are the games that we’ve been able to be in."

Samir Doughty scored 25 points for Auburn (25-5, 12-5 Southeastern Conference), which wiped out most of a nine-point deficit over the final 46 seconds as Texas A&M struggled at the free-throw line.

Auburn had already won three times after trailing by at least 15 points in the second half.

J'Von McCormick buried a contested 3-pointer with 7.4 seconds left to make it 77-75. Savion Flagg made the second of two free throws before Danjel Purifoy's potential tying 3-pointer at the buzzer bounced off the rim.

Auburn, a 12 1/2-point favorite, was trying to finish the season unbeaten at home for the first time since 1998-99. The Tigers have already secured a double bye in next week's SEC Tournament in Nashville, Tennessee.

Nebo made 9 of 12 shots before fouling out with 1:42 remaining in the game. Jay Jay Chandler and Flagg scored 14 apiece for the Aggies, while Mitchell had seven rebounds and four assists.

Doughty made five 3-pointers and was 10 of 11 on free throws for Auburn. Austin Wiley scored 15 points before fouling out and Isaac Okoro also had 15.

Mitchell worked off most of the shot clock before burying a contested 3-pointer from the top of the key for a 75-67 lead with 1:13 left. Flagg made 1 of 2 free throws with 46 seconds left to push the lead to nine.

Purifoy then made a 3-pointer and stole the inbounds pass to keep Auburn alive. Doughty cut it to 76-72 on a pair of free throws with 20 seconds left.

There was drama early in the second half when officials called three technical fouls in a 17-second span.

Auburn coach Bruce Pearl and his assistant, son Steven, were both called for technicals protesting a foul call. The elder Pearl continued jawing at the official through much of a timeout.

Mitchell made all for foul shots for a 41-38 Aggies lead. Shortly thereafter, Texas A&M's Chandler was called for a technical for flopping trying to draw a foul.

“They deserved this win but we could have played much better," Doughty said.

It was the final home game for seven Auburn seniors, including starters Doughty, Wiley, McCormick and Purifoy. They're the winningest senior class in Auburn history with 98 victories.