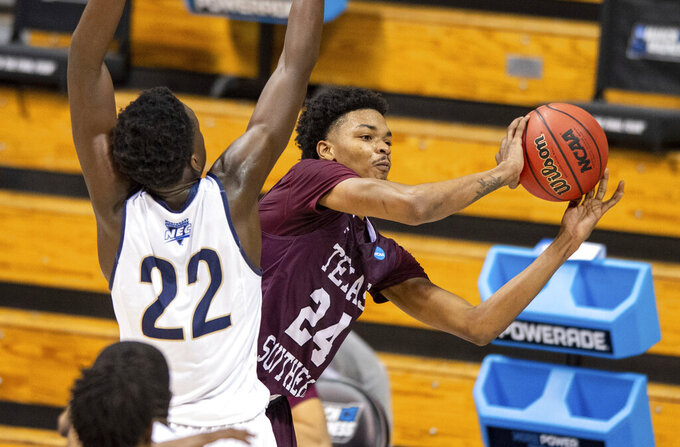 Texas Southern forward John Walker III (24) passes the ball off to a teammate after being stopped en route to the basket by Mount St. Mary's forward Nana Opoku (22) during the second half of a First Four game in the NCAA men's college basketball tournament Thursday, March 18, 2021, in Bloomington, Ind. (AP Photo/Doug McSchooler) 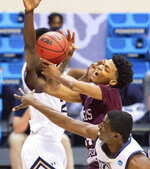 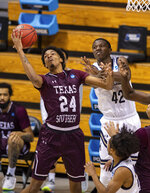 Nothing, not even a small, mostly quiet arena, could dampen his enthusiasm.

After scoring a season-high 19 points, grabbing a career-high tying nine rebounds and leading the Tigers back from a 10-point halftime deficit to beat Mount St. Mary's 60-52 in the first tourney game in nearly two years, Walker let loose.

“I feel like I’m on top of the world," he shouted. “I just wanted it so bad, it wasn’t even about me. It was about going out there and beating a good team and getting it done."

The Tigers (17-8) have won 10 straight overall and improved to 2-0 in First Four games. Their win over North Carolina Central in 2018 was the program's first in the NCAA Tournament. Next up for the No. 16 seed in the East Region is top-seeded Michigan (20-4) on Saturday.

For at least a few moments, the Tigers soaked up their victory. Coach Johnny Jones' players doused him with a cooler of water.

“They drenched me," he said. “I’m sitting here all wet, but I’ll tell you what — it’s one of the best feelings I’ve had in cold water in a long time.”

At least that part sounded like the usual March Madness — full of excitement and emotion.

But it wasn't the same.

In the first NCAA Tournament game since Virginia beat Texas Tech in overtime to win the national championship on April 8, 2019 — a span of 710 days — the atmosphere felt alien at Indiana University's Assembly Hall. Only players, coaches and staff members were permitted on the court level and an estimated 150 people sat in the cavernous lower bowl. There were no concession stand lines, no pep bands playing music, no raucous cheers, not even boos.

Instead, players relied on themselves to crank up the energy. When Walker and his teammates did that in the second half, they took off.

Walker and Jordan Gilliam scored the first 11 points of the second half to erase a 30-20 deficit and give the Tigers their first lead in nearly 20 minutes. They started pulling away with a 12-4 spurt that made it 46-42 with 8:10 to play and finally put the game away at the free-throw line. Gilliam finished with 12 points.

“I felt like I let myself down and I let my team down," an emotional Chong Qui said. “Like I said, we’ll be back. We’ll be back here and we’ll be better. We’ll take care of business.”

Mount St. Mary's: The Mountaineers beat the two top seeds in the Northeast Conference Tournament to make the 68-team field and made a gallant effort against the Tigers.

Texas Southern: Jones now has first tourney win with the Tigers and just the third ever by a SWAC champion. While Texas Southern found a way to advance, it needs to play much better to compete with the Wolverines.

Mount St. Mary's: Positive COVID-19 tests forced the Mountaineers to put the program on pause twice in December, forcing them into a monthlong break between games. Five games were postponed or canceled from Dec. 9-Jan. 6 and they didn't play a home game for 37 days.

Texas Southern: The Tigers started this season by playing four games in nine days and closed it by playing 10 games in 20 days because of make-up dates. They also were forced to play on the road after March 4 because their home court suffered water damage during a winter storm.

“I thought we were in a good space and I just I think we gave up a couple of and-ones early (in the second half), which gave them some rhythm," Mount St. Mary's coach Dan Engelstad said. “You know, basketball is a game of runs and they went on a big run right out of the gate.”

Jones, on Texas Southern kicking off the long-awaited tournament: “I thought it would put a spotlight on our program and our guys represented the program the right way."