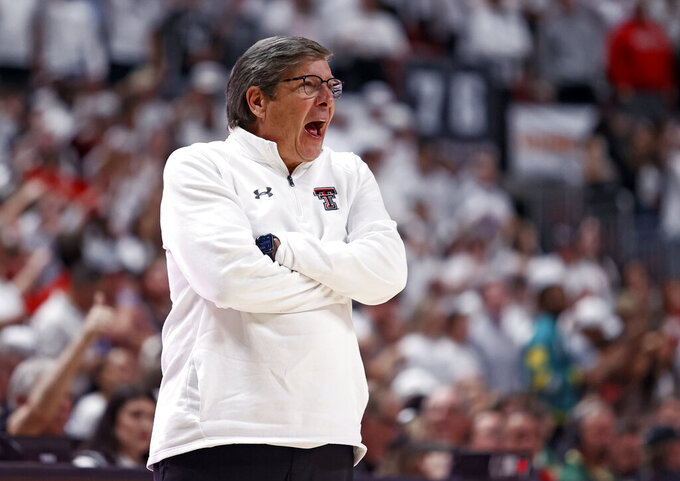 FILE - Texas Tech coach Mark Adams yells to players during the second half of the team's NCAA college basketball game against Baylor, Feb. 16, 2022, in Lubbock, Texas. Adams has a new contract that includes a hefty pay raise and adds two years to his deal through the 2026-27 season after leading the Red Raiders to the NCAA Sweet 16 in his first season as coach. (AP Photo/Brad Tollefson, File)

LUBBOCK, Texas (AP) — Texas Tech coach Mark Adams has a new contract that includes a hefty pay raise and extends his deal through the 2026-27 season after leading the Red Raiders to the NCAA Sweet 16 in his first season as head coach.

The new contract was announced Tuesday by the school, just more than a month after Texas Tech finished with a 27-10 record. Adams was the AP Big 12 coach of the year after the Red Raiders were 18-0 at home and third in the Big 12 regular-season standings behind No. 1 seeds Kansas and Baylor — teams they beat at home.

Adams' total compensation will start at $3 million next season, and annual $50,000 increases will take that to $3.2 million in 2026-27. When Adams replaced Chris Beard last April he initially got a five-year contract and was scheduled to make $1.95 million plus incentives next season.

The Lubbock Avalanche-Journal reported that Adams, who turns 66 next month, would get an additional year added to his contract if the Red Raiders win or share the Big 12 regular-season championship, win the conference tournament or make the Sweet 16 of the NCAA Tournament. He also would earn a $200,000 retention bonus if he remains coach on May 1, 2023 and every May 1 thereafter.

“We are proud of the success our men’s basketball program had in its first season under coach Adams,” athletic director Kirby Hocutt said. “Texas Tech basketball is very much a brand at the national level and that has not changed under coach Adams’ leadership."

Adams was Beard's top assistant with the Red Raiders for five seasons, including 2018-19 when they went to the national championship game. The homegrown West Texan and 1979 Texas Tech graduate got the job after Beard left for bitter rival Texas, his alma mater.

“I’m proud of the season we had last year and look forward to reaching even higher levels of success as we continue to build this program," Adams said. "Texas Tech has always been my destination and I will continue doing everything possible to make this the best program in the nation. I thank God for this opportunity to invest in these young men and to represent Texas Tech.”

Along with the wins over Baylor and Kansas, Tech swept two games from the Beard-coached Longhorns.