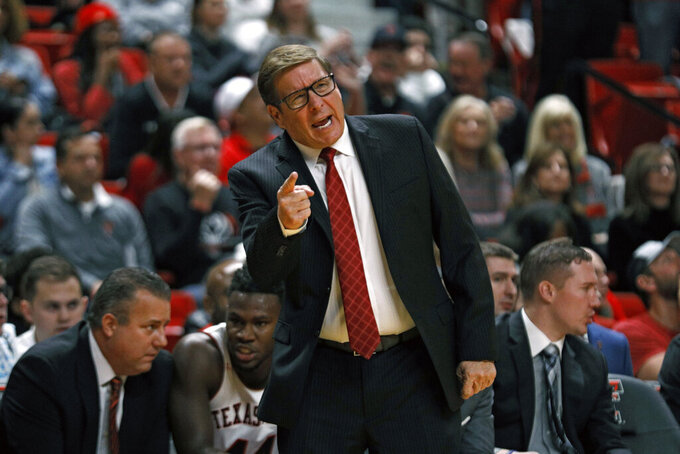 Mark Adams, the Texas Tech graduate who was born about 40 miles from the Lubbock campus and spent the past five seasons as a Red Raiders assistant, was introduced Tuesday night as their head coach.

“I love the game of basketball, but I also love West Texas and I love Texas Tech,” Adams said. “This is home. And I get to stay home.”

Adams was introduced before a live crowd inside the school's home basketball arena that included his 90-year-old mother, football coach Matt Wells and other Red Raiders head coaches.

A few minutes into his speech, Adams thanked Beard, drawing immediate boos from a crowd of mostly students. The players were seated on the floor with coaches and Adams' family members.

“Boy, this group will turn on you pretty quick," Adams said as he looked behind him at athletic director Kirby Hocutt, who didn't hide his disappointment in announcing Beard's departure last week, two years after he led Texas Tech to the national championship game.

“I wouldn't be here without coach Beard,” Adams said. “I appreciate him giving me an opportunity to coach with him. He’s done a lot for Texas Tech. He’s a friend of mine. I get to be right here as the head coach and it’s because of him.”

Adams, known as a defensive guru, was on the staff for all five of Beard's seasons with the Red Raiders after being with him for a 30-5 season that included a first-round NCAA Tournament win at Little Rock in 2015-16, before they went to Texas Tech.

Hocutt said Adams' experience, pride and commitment to the program and the university made him the ideal choice to be the new coach.

“We’re an emerging giant in the college basketball world and we’re not going anywhere but forward,” Hocutt said to cheers before introducing Adams.

Adams is a 1979 graduate of Texas Tech, where he was previously director of basketball operations from 2013-15.

When Beard left for the Longhorns last week, Hocutt said he would be part of a four-person search committee and that an outside firm would also be hired to assist in the process. Many former and current players publicly campaigned for Adams to get the promotion.

Sophomore guard Kevin McCullar, who averaged 10.4 points and 6.3 rebounds this season, responded to the news of Adams getting the job with a Twitter message Monday night that read, in part, “We Have Unfinished Business!” and then in bold red and bigger letters, “IM NOT GOING ANYWHERE."

Beard was 112-55 in five seasons with the Red Raiders. He was the The Associated Press Coach of the Year in 2019 as he guided Texas Tech to a 31-7 finish and the NCAA Tournament title game loss to Virginia in overtime, a year after they reached the NCAA Elite Eight. The Red Raiders made it to the second round of this season’s tournament.