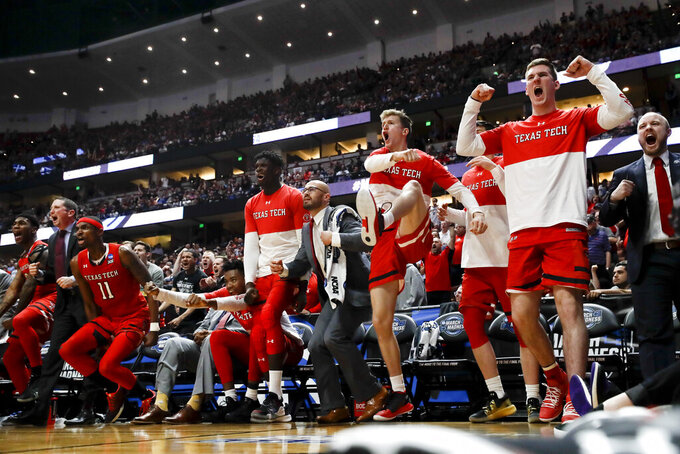 Texas Tech celebrates after the team scored against Gonzaga during the second half of the West Regional final in the NCAA men's college basketball tournament Saturday, March 30, 2019, in Anaheim, Calif. (AP Photo/Jae C. Hong)

ANAHEIM, Calif. (AP) — One player came all the way from Italy. Another arrived from rural Illinois after a stop in South Dakota. Still another could've gone a lot of places but chose to stay home and see if he could help Texas Tech make the big time.

It can't get much bigger than this.

Coach Chris Beard and his group of unheralded grinders notched a victory for everyone with a chip on their shoulder Saturday, gutting out a 75-69 win over Gonzaga that's sending the Red Raiders to the Final Four.

Davide Moretti of Bologna, Italy, made the two most important 3-pointers of his life to open a sliver of a cushion, then defense sealed the deal - and wrapped up a trip to college basketball's biggest stage for the first time in the 94-year history of the program.

Anyone who has caught even a glimpse of this team's nation-leading defense wouldn't have been surprised. It was typical of the Red Raiders (30-6) — in this case, an inch-by-inch takedown of the nation's most prolific offense, punctuated by Tariq Owens' major rejection of Rui Hachimura with 56 seconds left - one of Texas Tech's seven blocked shots, to go with nine steals and 16 forced turnovers.

"It's real. That defense is real," Gonzaga coach Mark Few said. "It impacted us tonight. They took a lot of balls tonight."

Jarrett Culver, an NBA prospect who chose his hometown college over several other suitors, led the Red Raiders with 19 points. Matt Mooney, out of Wauconda, Illinois, and playing as a graduate transfer from South Dakota, had 17.

But, as usual, the biggest stats came on defense.

Texas Tech held the Bulldogs to 42 percent shooting, some 10 points below their average. This was only the fourth time Gonzaga was held under 70 this season. In short, the Red Raiders gave the Zags very little room to breathe.

"I think I turned the ball over five times in the first half," said Gonzaga forward Brandon Clarke, who finished the game with six. "It's something I've never done."

After falling behind by 7 points late, Gonzaga (33-4) chipped away and pulled within 71-69 on Zach Norvell Jr.'s putback with 11 seconds left. But

Josh Perkins reached over the end line and tipped the ball out of Mooney's hand as he was inbounding, and the refs called a technical.

"I just reached at it," Perkins said. "It was a bonehead play, something I'll think about forever."

Moretti (12 points) did the honors — sinking the technical free throws to ice the game.

He was the player brought to tears earlier this month, when his family visited from Italy and Beard brought them into the meeting room to surprise him.

If he thought that was fun, just wait.

"I can't believe we're here after all the work we did this season," Moretti said.

Though Gonzaga was the only team to beat Duke and Zion Williamson at full strength this season, there will be no rematch in the Final Four. With Clarke (18 points, 12 rebounds) and Hachimura (22 and 6), both of whom could be possible lottery picks, this might have been Few's most talented team — even more talented than the squad that made the national final two seasons ago.

But programs find talent in lots of different corners, and Beard has been amassing his share - then coaching it up - since he arrived in Lubbock three years ago. It's his 12th stop on a nationwide tour through community colleges, Division II and assistant's jobs - most notable among them the 10 years he spent at Texas Tech working for Bob Knight and then Knight's son, Pat.

"It was like getting a PhD in coaching every day," Beard said.

Texas Tech wasn't picked to do much after losing players from the team that stalled out at the Elite Eight last year. But as the preseason, then the regular season, wore on, Beard said opposing coaches kept telling him the Red Raiders might be something special.

He relished putting a large chip on his players' shoulders, telling them they had to work harder because they weren't the All-Americans and NBA prospects that dot the rosters of some of those bigger, more-famous teams.

A good story line, for sure. But Beard might be changing his tune ever so slightly.

"I don't mind the underdog, chip-on-the-shoulder story, but it disrespects these players a little bit when people don't understand, we have really good college players," he said. "We have one of the best teams in the country this year."

One of the four best, at least.

The Red Raiders are the first Texas team to make the Final Four since University of Texas went in 2003.

Despite the loss Clarke's prospects certainly went up again. He was 7 for 10 from the field and had two more blocks to bring his nation-leading total to 117. His most amazing stat: He finished the season with the same number of blocks as missed field-goal attempts.

Texas Tech takes its show to Minneapolis, where it will meet the winner of the East Region final between Duke and Michigan State.