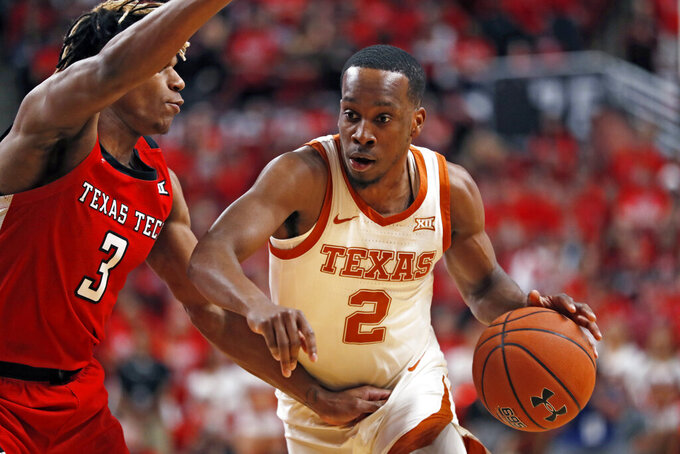 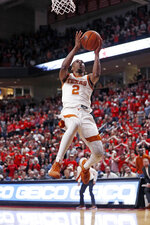 LUBBOCK, Texas (AP) — Texas coach Shaka Smart has a simple message for his Longhorns when they were coming off a 29-point loss, and had a four-game losing streak.

“We have to choose how we respond,” Smart told them then.

Instead of letting its season completely unravel, Texas is now making a late push for an NCAA Tournament berth.

Andrew Jones had a career-high 22 points for the second game in a row and the Longhorns scored the game's last eight points over the final minute in a 68-58 win at No. 22 Texas Tech on Saturday, stretching their winning streak to four games since that loss at Iowa State two weeks ago.

“When you have self-pity or selfish intent or you get bored, any of those three things, you can’t be aggressive. You can’t be on the attack and that’s affected at times earlier this year," Smart said. “We’ve talked about that a lot as a program. But, our guys have taken ownership of it ever since we came back from Iowa State."

Royce Hamm Jr. had a putback layup to put Texas (18-11, 8-8 Big 12) up 62-58 with 50 seconds left. Texas Tech then had a chance to cut the gap, but freshman Jahmi'us Ramsey's dunk attempt ricocheted off the back of the rim. Matt Coleman III got the rebound and turned that into a fastbreak layup for the Longhorns.

The Red Raiders (18-11, 9-7), the Big 12 co-champions last season when they made it to the NCAA championship game, didn't score again. Tech lost both of its games this week after getting back into the Top 25 and face the nation's top two teams next week.

“To me, it’s not refocus. We’ve been focused since the first day of practice,” Tech coach Chris Beard said. “It’s just staying the course. ... Told you guys they were one of the hottest teams in college basketball right now and today that proved to be true again.”

Courtney Ramey had all 12 of his points in the second half for the Longhorns, who are making a late push to get into the NCAA Tournament. Coleman only had six points, but had two free throws in that final minute after his fastbreak layup.

Ramsey led Texas Tech with 13 points, while Kevin McCullar had 12, Davide Moretti 11 and Terrance Shannon 10. Moretti was scoreless after halftime, when the Red Raiders led 37-30.

“Our season’s on the line,” Moretti said. “I feel like we've got to come out ready. We've got to, like I said, find our consistency. I feel like now our back’s are against the wall. We got to bounce back."

Jones is in his first full season back since being diagnosed with leukemia in January 2018. He underwent his final treatment in last September, and is classified as a sophomore after two medical redshirt seasons.

“It’s a phenomenal story,” Smart said. First of all, for him to even just to be out there and playing and competing after all the stuff he’s been through is so much fun."

Jones said he is feeling good, “starting to find my footing a little bit, starting to get my feet underneath me again. My body is starting to feel really good."

Texas: Smart’s energy was matched by his team’s efforts in a hostile environment. Jones was 8-of-14 shooting overall and the Longhorns made a strong second-half adjustment to outplay Texas Tech for a big road win late in the season.

Texas Tech: The Red Raiders continue to struggle with consistency in what Beard projected to be a roller coaster season before it began. Ramsey continues to prove his worth as a freshman but the veterans haven’t gelled like the previous two grad transfers, Tariq Owens and Matt Mooney, last season. With the nation's top two teams on tab next week, the Red Raiders are in a tough spot.

Texas: Plays on Tuesday night at Oklahoma, which won by 10 in Austin on Jan. 8.

Texas Tech: Finishes the regular season against the nation's top two teams. Travels to No. 2 Baylor on Monday night before hosting No. 1 Kansas on Saturday. The Red Raiders lost the earlier matchups by a combined eight points.