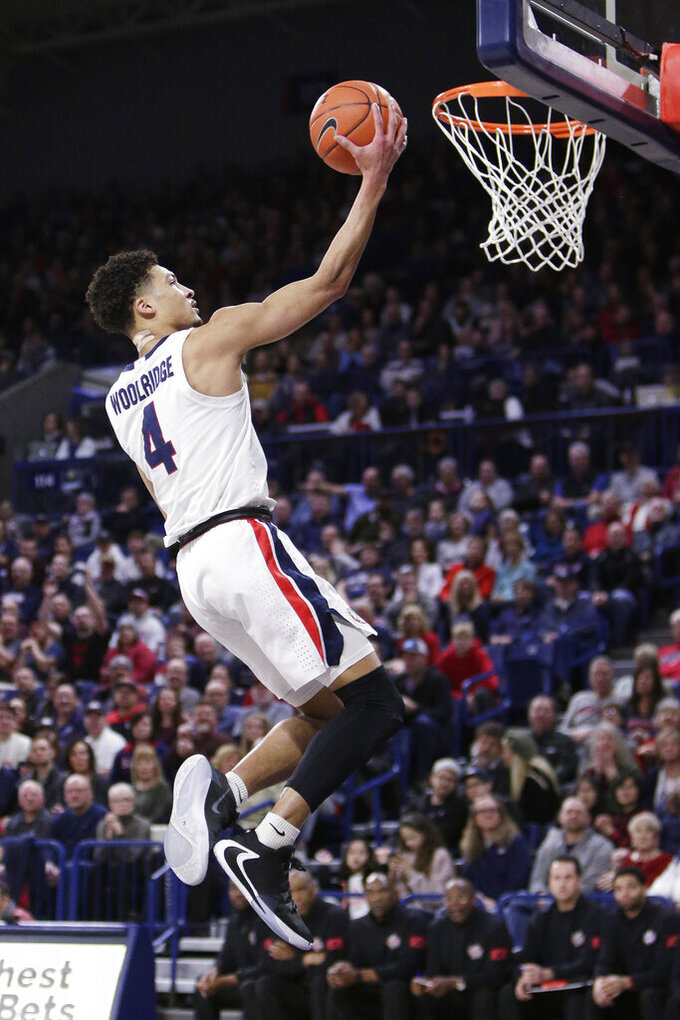 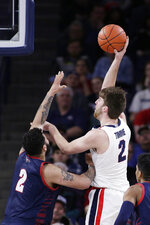 SPOKANE, Wash. (AP) — Growing up in the Dallas area, Ryan Woolridge and Admon Gilder once played together on an AAU team as kids.

They are still not entirely sure what age they were — somewhere around 10 or 11 years old — and can barely recall how the other was as a player.

But for Gilder, there is one specific memory he has of Woolridge.

“(Ryan) had very long hair. He had hair down to his back. ... And he’s always been fast. Always,” Gilder recalled.

The pair followed a circuitous path after that to reunite in a place neither could have ever imagined playing basketball. Spokane, Washington, was never on either player's radar until Gonzaga came calling after last season looking to replenish its depleted backcourt.

So the two guards made separate, but equally important decisions to play their final year of college basketball for the Bulldogs.

They’re part of a Texas trio playing big roles for the No. 1 team in the country. Woolridge, Gilder and backup forward Drew Timme all left the comforts of Texas — the Dallas area to be specific — for the chance to play for an elite program.

So far, they're giving Gonzaga exactly what it needs. Woolridge has started every game, leads the team in assists, is second in minutes played and is scoring 10.5 points per game. Gilder is right behind him at 10.2 per game. Timme is usually Gonzaga’s first post player off the bench and is averaging 9.2 points per game while shooting nearly 58% from the field. If Timme has a couple of big games scoring, the Zags could have an unheard of seven players averaging in double figures.

While Timme was Gonzaga-bound from the start, the additions of Gilder and Woolridge have become critical for the Zags.

The two guards immediately stepped into important roles for a team lacking depth in the backcourt. The graduation of Josh Perkins and the early departure of Zach Norvell Jr. for the NBA left the Bulldogs extremely thin at the guard spots, and while Gonzaga has guard help coming for the 2020-21 season, it needed to find a solution in the transfer market for this season.

Woolridge had always admired Gonzaga from afar even as he developed into a solid player at North Texas. Coming out of high school, Woolridge thought he was going to Texas to be a star for the Longhorns. A coaching change landed Woolridge at San Diego, but a family illness caused him to return to Texas before he ever played a game in California.

So North Texas became his option. As his career progressed, Woolridge thought there could be another opportunity out there once he finished his degree. Woolridge visited Arkansas and Oklahoma State, and was about to set up a trip to Arizona when Gonzaga reached out.

“At the beginning I was just kind of shocked, kind of star struck I guess you could say, because I've always watched them on TV,” Woolridge said. “And then just being able to come here and step in these shoes is almost like a dream.”

Gilder was hoping just to play again. The former Texas state player of the year as a senior in high school should be done with his college career. Last year at Texas A&M was supposed to be the conclusion.

But he never played a minute for the Aggies in 2018-19 after three years of being a major contributor.

Gilder missed the start of the season due to a knee injury. He was then diagnosed with a blood clot. He missed his entire senior season with the Aggies and wasn’t cleared to resume basketball activities until after the season was over. And when former Texas A&M coach Billy Kennedy was fired after the season, Gilder decided to move on as well.

His choices were Texas Tech -- last year’s national runner-up -- and Gonzaga, the team the Red Raiders beat to reach the Final Four. Going to Texas Tech would have meant staying close to home and around things that were familiar to Gilder.

Which is partly why he ended up at Gonzaga. There was also the chance to play the kind of style he always wanted, along with the possibility of being on a team that would give him a chance to play in the NCAA Tournament again.

“Just the situation, knowing what they had lost and what kind of position they were in and knowing I could come and fit right in,” Gilder said. “And it’s the way I’ve always wanted to play, up tempo, fast, just get up and down the court and scoring.”