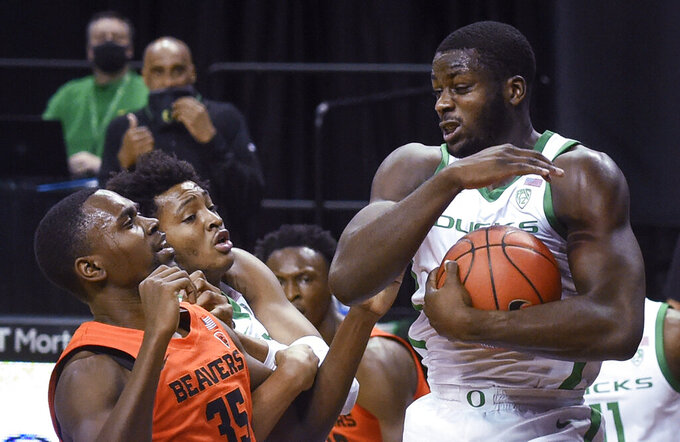 Oregon forward Eugene Omoruyi (2) comes down with a rebound next to Oregon State forward Dearon Tucker (35) during the first half of an NCAA college basketball game Saturday, Jan. 23, 2021, in Eugene, Ore. (AP Photo/Andy Nelson)

Thompson, a senior guard, joined Gary Payton as the only players in school history with at least 1,400 points and 400 assists. He was 3 for 11 from the field, but made 12 of 14 free throws and scored 14 points in the second half.

“They were pressing a lot so it freed up some looks if I was able to get down the court,” Thompson said. “I might have been forcing too much early, but in the second half I let the game come to me. Guys were making plays for me when I was open.”

“We got killed on the boards, that was by far the biggest factor,” Oregon coach Dana Altman said. “Our physicality on the boards was just awful. We had a chance from the free throw line to stay close and we went 14 for 23 and they went 22 for 24.”

The Beavers broke a 34-all tie early in the second half with eight straight points and never trailed the rest of the way.

“We got key stops and made stops, which is something we didn’t do early in the season,” Oregon State coach Wayne Tinkle said. “We are certainly making progress.”

Oregon, which had three games postponed last week due to COVID-19 issues in the program, played without leading scorer Chris Duarte and top rebounder LJ Figueroa, who both tested positive. Oregon also is without starting guard Will Richardson, who has yet to play due to a thumb injury, and center N’Faly Dante, who is out for the year with a knee injury.

“They were missing two big pieces so we know it is going to be a different team the next time we face them,” Tinkle said. “We could have laid an egg thinking this game was going to be an easier game, but I am happy with our guys for staying focused and humble.”

Oregon State: After losing 98-64 at home to Arizona last week, the Beavers have rebounded with three straight wins to move above .500 in conference play. Oregon State sits in seventh place in the Pac-12, but just one game out of fourth. “We have come a long way these past three games,” Thompson said. “From the start of the season where we were losing close games or getting up in games and not being able to finish out, this team has matured and come a long way.”

Oregon: The Ducks had just eight scholarship players available. They hope to get Duarte and Figueroa back when they go on a three-game trip to Los Angeles next week.

Oregon: At UCLA on Thursday night.