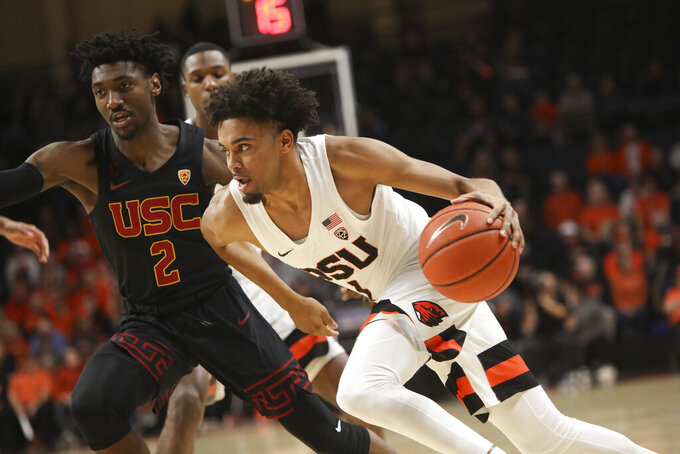 CORVALLIS, Ore. (AP) — Oregon State's leading scorer and rebounder was injured and out for the game, so other players were challenged by the coaching staff to step up.

"We have depth on our team. When one guy goes down, we can make it up in different ways," freshman point guard Antoine Vernon said.

"What do you say about Stevie? Just stepping up as a senior and willing our team to victory. Everybody else fed off of him," Oregon State coach Wayne Tinkle said. "We showed a lot of guts and a lot of grit."

Bennie Boatwright had a career-high 37 points with four 3-pointers and eight rebounds and Jonah Mathews added 13 points off the bench for the Trojans (9-7, 2-1).

"Both teams played hard, both played pretty well and they made a big shot. That was the difference in the game," Southern California coach Andy Enfield said.

In overtime, Boatwright sank a pull-up jumper with 1:30 left to put the Trojans up 74-72. Ethan Thompson responded with a 3-pointer on the Beavers' next possession.

Boatwright missed a 3-pointer with 39 seconds left, and the Trojans were forced to foul. Stephen Thompson Jr. made one of two, and the Beavers led 76-74.

Kevin Porter Jr. attacked the rim for Southern California, but Kylor Kelley rejected his shot. Stephen Thompson Jr. gathered the rebound, was fouled, and made both free throws this time.

Tres Tinkle, who averages 20.5 points and 8.6 rebounds per game for the Beavers, was out with an injured ankle.

Oregon State went on an 18-0 run in the first half, holding the Trojans scoreless for nearly six minutes, to take a 32-25 lead with 5:33 before the break.

Southern California was up 66-64 and had the ball with a minute left in regulation, but Nick Rakocevic's jumper was blocked by Kelley. On the Beavers' next possession, Warren Washington's shot was blocked by Nick Rakocevic, but Ethan Thompson grabbed the offensive rebound and made a lay-in.

Boatwright missed a 3-pointer from the top of the key on the last possession of regulation.

Southern California: Rakocevic, the reigning Pac-12 player of the week after averaging 25 points and nine rebounds in home wins over California and Stanford, was held to just six points and seven rebounds. . The Trojans had won their last six meetings with the Beavers, including three last season.

Oregon State: Kelley, who came into the game leading the nation with 3.9 blocks per game, had five points and seven blocks. . Tinkle's injury opened up more playing time for other players, including freshman post Warren Washington, who had career highs with seven points and 26 minutes.

Wayne Tinkle said his son could have played on Thursday, but would have only been about 70 percent, and his ankle would have deteriorated to only 60 percent for Sunday. But with rest, the coach was counting on Oregon State's star to play against UCLA. "We can't make a decision for sure, but I'm banking on him playing until I hear something else. But we'll see," the coach said.

Washington didn't play a minute against Oregon last week, but on Thursday he was getting plenty of time and checking Rakocevic. Wayne Tinkle said that Washington earned his playing time by working hard in practice after Christmas. "We thought we could try this big lineup at some point," he added.