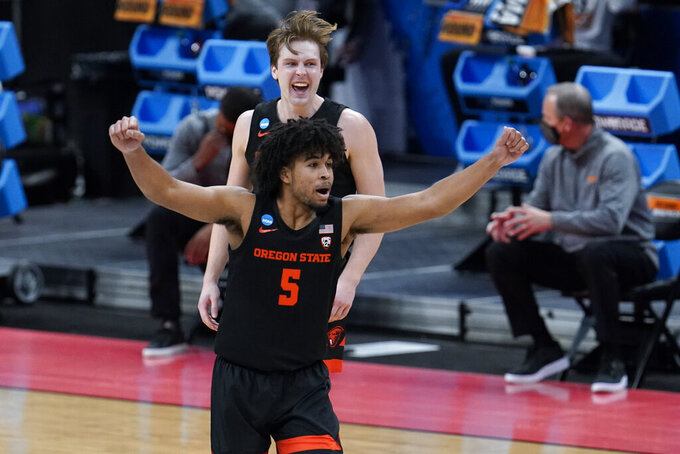 Oregon State guard Ethan Thompson (5) reacts to a basket against Tennessee during the second half of a men's college basketball game in the first round of the NCAA tournament at Bankers Life Fieldhouse in Indianapolis, Friday, March 19, 2021. (AP Photo/Paul Sancya)

Oregon State's senior guard had just led the Beavers to a spot in the Sweet 16, the latest milestone for a team picked to finish last in the Pac-12 at the start of the season.

“We knew it was in us, this success,” Thompson said, the smile plastered on his face. “We pictured it from the beginning.”

No. 12 seed Oregon State will now face eighth-seeded Loyola Chicago on Saturday in the Midwest Region of the NCAA Tournament. The winner earns a spot in the Elite Eight against the winner of the game between second-seeded Houston and No. 11 Syracuse.

The Beavers are one of four Pac-12 teams in the Sweet 16, joined by sixth-seeded USC, No. 7 Oregon and No. 11 UCLA. The Trojans face the Ducks on Sunday in the West Region, while UCLA meets second-seeded Alabama in the East. The Pac-12 hasn't won an NCAA title since 1997 — the longest drought for a major conference.

But the Beavers are perhaps the most surprising of the group.

They earned an automatic berth in the tournament by beating Colorado 70-68 in the Pac-12 tournament championship game. Then they downed fifth-seeded Tennessee 70-56, their first NCAA Tournament victory since 1982, before an 80-70 win over No. 4 Oklahoma State to set up the game against the Ramblers.

“I’m so grateful for this,” Thompson said. “I just got a feeling that I don’t want it to stop.”

This is Oregon State’s first tournament appearance since 2016 and only the second since 1990. The Beavers have twice made the Final Four, in 1949 and 1963. The victory over the Volunteers snapped a seven-game tournament losing streak.

For Thompson, this is sort of destiny: He comes from a basketball family. His dad, Stephen Thompson, is an assistant on Oregon State's staff, and his big brother is a Beavers alum who currently plays in Italy.

The elder Thompson played at Syracuse and was on the 1987 team that played Indiana in the NCAA championship game.

Except for perhaps the Beavers, few foresaw the success they'd have this season. After the dire prediction by the Pac-12's media, Oregon State dropped early games against Wyoming and Portland — which went just 6-15 this year.

“Honestly, I’ll take the tough losses early because I think it taught us a lot of lessons on how to close out games, and we’re closing out games at the right time,” Thompson said.

“We had a lot of guys hurt early when we were able to start practice. I think it was in the first 40 days we only had seven days where we had our whole team at practice. We suffered from tough losses, but we never threw in the towel. We never doubted ourselves,” Tinkle said. “We just do what we do. We just stay hungry and humble, and we keep working, and we peak at the right time. It shouldn’t have been a surprise. We just kept grinding it out knowing that we would get to playing our best basketball when it matters most.”

Thompson, named to the All-Pac-12 first team, averaged 15.3 points and 3.6 rebounds in the regular season, but he’s upped his game in the tournament, averaging 19.5 points and 8.5 rebounds.

Last year, Thompson flirted with leaving school early and trying his luck in the NBA draft, but he withdrew his name two days before the deadline and decided to return to the Beavers for his senior year.

He said Oregon State has excelled by keeping it simple and focusing on the fundamentals.

“We believe that we’re capable of doing great things. Whether that be getting a much-needed stop on defense, breaking the press, taking care of the ball, just take it step by step,” Thompson said. “If we take all the right steps, they’re going to lead to wins.”