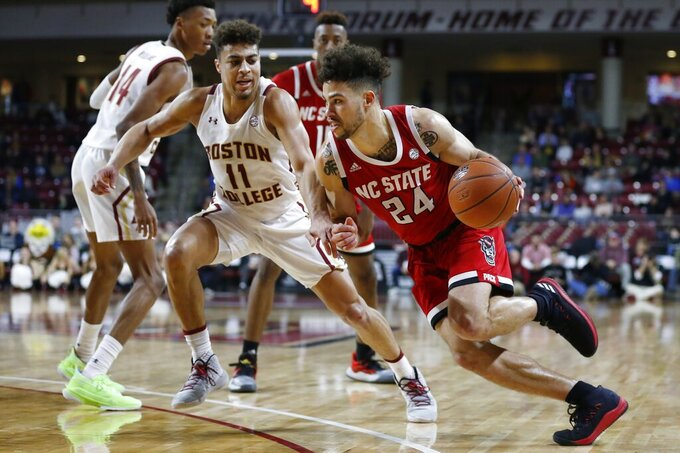 BOSTON (AP) — Steffon Mitchell put his body on the line to help Boston College fend off a second-half surge against North Carolina State.

Mitchell made a couple of key steals late, Derryck Thornton scored 22 points, and the Eagles beat the Wolfpack 71-68 on Sunday night.

“I feel like I’m never surprised with Stef,” Thornton said of Mitchell. “Stef plays, probably one of the hardest people I’ve ever seen play on the court. He gives 110% every time he touches the floor.”

Mitchell finished with just four points, three rebounds and three steals, but made his biggest impact in the final minute.

With BC leading 67-66, Mitchell wrestled the ball away from N.C. State’s Markell Johnson with 1:03 remaining and found Jairus Hamilton for a break-away dunk.

Mitchell sealed it with another steal after Jericole Hellems again made it a one-point game with 29 seconds left and Thornton missed a jumper with 22 seconds left.

The junior forward intercepted a pass to Johnson with 13 seconds left, tip-toed around him on the sideline and again fed Hamilton for the sealing dunk.

“You just know he’s going to be around the ball,” BC coach Jim Christian said. “He does what Stef does, and then Jairus goes down and finishes twice.”

Jay Heath scored 16 points, Nik Popovic added 14 and Hamilton 11 for Boston College (13-13, 7-8 ACC), which has won four of its last seven. The Eagles have not won back-to-back games since a season-high, four-game winning streak Dec. 7 to 21.

“You cannot dwell in this league on one game, because the next game is going to be even tougher,” Christian said. “These guys have shown that ability time and time again to just bounce back and be resilient and fight.”

“I just thought we played catch-up the entire night,” N.C. State coach Kevin Keatts said. “I thought our guys played tremendously hard at the end and had an opportunity to put ourselves in a situation (to win).”

After a timeout, N.C. State had a chance to tie with 7.1 seconds remaining. Johnson caught the inbounds pass and pushed it inside to Bryce, who dribbled to the corner and missed a desperation 3 as time expired.

The Wolfpack had won two straight on the road, but fell short of their first three-game ACC road winning streak in 16 seasons.

After three straight victories in late January and early February, N.C. State dropped three in a row before bouncing back with two straight wins before Sunday’s setback.

“When you look across college basketball and you look at our league in general, everybody’s been streaky,” Keatts said. “You’ve got to have more highs than lows, and we’ve had ‘em.”

N.C. State couldn’t trim a seven-point halftime deficit under five early in the second half. Braxton Beverly’s free throw made it 56-52 midway through the second and Funderburk’s dunk with 6:18 left cut it to 60-58.

Daniels’ 3-pointer with 3:45 remaining tied it at 6-all before Johnson made a spinning layup 30 seconds later to give the Wolfpack their first lead since the game’s opening minute at 66-64.

Thornton made two free throws with 2:48 left and Mitchell sank one of two with 2:02 left to restore the Eagles’ lead.

Boston College led 40-33 at halftime behind 11 points from Thornton.

Thornton and Heath combined for 17 points to help BC take a 26-14 lead with eight minutes to play in the first. Daniels scored all seven of his first-half points in the final 6:11 to help N.C. State pull within single digits at the break.

It was the only matchup between the Wolfpack and Eagles this season. N.C. State rolled to a 73-47 win in their most recent meeting last Mar. 9. The forty seven points were the fewest by an opponent in coach Kevin Keatts’ two-plus seasons.

The oft-injured Popovic was making his first start since Dec. 3 against Northwestern. BC guard Jared Hamilton missed his second straight game with an ankle injury.

N.C. State: An inconsistent stretch hasn’t helped the Wolfpack’s standing on the NCAA Tournament bubble. A tough back-to-back against No. 7 Duke and No. 8 Florida State could make or break the Wolfpack’s dreams of a third straight postseason trip under Keatts.

Boston College: With minimal hope of earning an at-large bid to avoid an 11-year NCAA Tournament drought, the Eagles’ only hope is to finish strong and build momentum for an ACC Tournament run. BC has alternated wins and losses over its last eight games. The Eagles host three of their final five games, but are just 8-7 at home this season.