Thornton leads BC past Wake Forest 77-70 in schools' opener 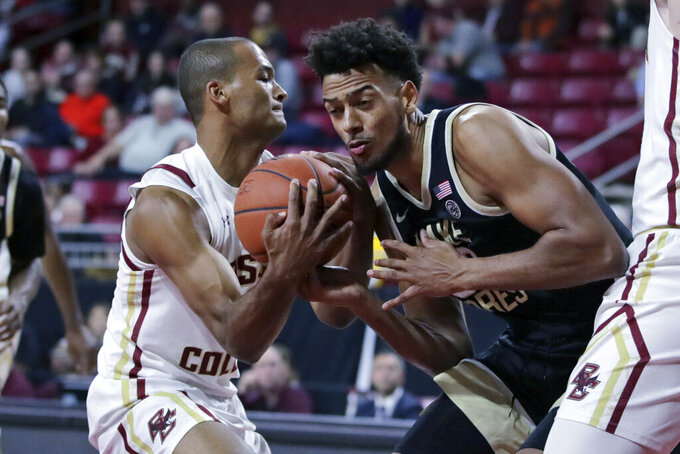 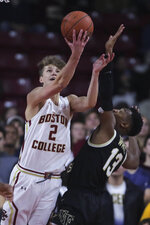 BOSTON (AP) — Boston College turned up the speed and handled the pressure of their season-opening conference test with some tough defense.

Derryck Thornton scored a career-high 23 points and Nik Popovic had 19 to lead BC to a 77-70 victory over Wake Forest Wednesday night in the season opener for both schools.

"We talked about it all preseason that we've got to create offense from defense," BC coach Jim Christian said. "I think in the first half we did a good job with that."

The Eagles turned 17 Wake Forest turnovers to an 18-2 advantage in points-off-turnovers.

"They understand that this is a very, very good league and every night is very competitive," Christian said. "They fully got it that this (was) going to be an important game just to determine who we are."

Brandon Childress had 24 points, and Isaiah Mucius 18 for the Demon Deacons. Wake Forest shot just 32.4% in the first half, missing 23 of 34 attempts from the floor.

But it was the turnovers that hurt the Demon Deacons most.

"They put us in some tough situations as far as taking care of the basketball," Wake Forest coach Danny Manning said. "The points that they were able to score off our turnovers was a huge difference for us. We also have to do a better job on transition defense."

Committed to running the floor on nearly every opportunity, combined with that tough man-to-man defense, helped BC open a 42-27 lead at halftime.

The Eagles went on a 20-3 run during a 6:47 stretch of the opening half to make it 27-12. Popovic, Jared Hamilton and CJ Felder each nailed a 3 during the spree.

After Wake Forest sliced its deficit to eight late in the half, Heath sparked a quick 10-0 spurt, scoring eight of his points during the spree.

Wake Forest, opening a season with its first true road game since 1993, sliced it to six with just under two minutes to play, but BC held on.

Wake Forest: The Demon Deacons returned 77% of their scoring from last season, but they looked rattled, at times, offensively and turned the ball over way too much. They'll needed to clean that up before they get to ACC play.

"All those guys know coming into practice those spots are open," Manning said. "There's no guaranteed spots. They'll be some changes if we don't see something more to our liking in terms of taking care of the basketball, getting to the free-throw line."

Boston College: Thornton, a graduate transfer from USC who started his collegiate career as a highly touted player at Duke before transferring, looked poised and ran the offense effectively. Certainly, having experience at the point should help a lot when things get tight, and with the addition of Heath and Felder, the Eagles look like they can be more balanced offensively this season.

"My supporting cast on this team is helping me be the leader," Thornton said. "I've still got a long way to go. It's my first game back playing in (the ACC) a little while."

Thornton made a quick cut near the foul line driving toward the lane and split the bottom of his left sneaker during the first half.

When the 6-foot-3 guard backed out and dribbled near midcourt, he looked down and the bottom of his sneaker was slightly hanging off. During a timeout, he took off the white sneakers and put on a pair of maroon ones. He wasn't injured.

"Yeah, I was surprised," he said. "I thought it was something with my foot. It didn't hurt. I looked down and saw the shoe was messed up. I told the ref: 'My shoe's messed up.'"

BC sophomore forward Jairus Hamilton came down awkwardly trying to make a steal in front of his team's bench in the first half. He limped to the bench, was looked at by a trainer before walking slowly favoring the leg heading to the locker room. He didn't return. . His brother, Jared, a senior, also went down hard in the final two minutes, favoring his left leg.

Christian didn't have an update.