Timme's time is now as key to Gonzaga's bid for perfection 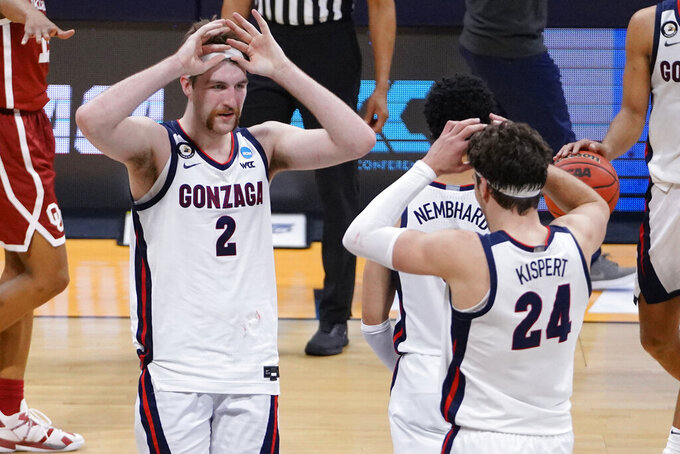 INDIANAPOLIS (AP) — He was already enjoying a terrific season, and now Drew Timme is one of the stars of March after two games of the NCAA Tournament.

His game? It’s pretty good, as evidenced by what he did in Gonzaga’s second-round victory over Oklahoma, helping keep the top-seeded Bulldogs unblemished in their quest for perfection.

His mustache? It might be even better than his game, even if his mom isn’t a huge fan of his latest facial hair experiment.

“After this game, I think she’ll be OK if I keep it,” Timme told CBS after beating the Sooners.

On a team filled with stars, all carrying the expectations of trying to complete the first undefeated championship season in 45 years, Timme could be the key for Gonzaga in making that happen.

He’s the big guy for the Bulldogs. The one who has to be respected by opponents, but also the player who can sometimes be left to feast at the offensive end because of all the other problems the Zags create.

Corey Kispert was deservedly a first-team AP All-American selection for Gonzaga. Jalen Suggs is likely to be the highest NBA draft pick of the current crop of Zags.

But the Bulldogs don’t sit at 28-0, riding a 32-game win streak, if it’s not for the inside presence Timme provides.

“We’ve talked a lot about kind of feeding off each other and make sure we get each other going on the floor,” Kispert said. “Drew’s put in the time and he’s an ultra, ultra talented player.”

It was on display against Oklahoma on Monday. With Kispert slowed early due to foul trouble, Timme responded with a career-best game of 30 points and 13 rebounds against the Sooners.

At times, Timme outwitted Oklahoma’s post defenders. In other moments, he was simply tougher, scoring through contact or being first to a loose ball.

The tournament is a pretty good time to have one of the best games of your career.

“It’s great. Obviously, it’s a childhood dream,” Timme said. “This feeling is only going to last the rest of the night and then we’ve got to prepare and a lot of work to do. We’ve got a lot of things we can work on.”

Timme averaged 18 points and seven rebounds while shooting an absurd 65% from the field during the regular season. And his performances didn’t go unnoticed — he was a second-team All-American selection. But with Kispert rewriting parts of the Gonzaga record book and the talk of whether Suggs could be in line for the No. 1 overall pick in the NBA draft, it was easy for discussion about Timme to get shuffled back.

That would be unfair to what he's provided his team. In six games against teams from Power Five conferences this season — Kansas, Auburn, West Virginia, Iowa, Virginia, Oklahoma — Timme is averaging 24 points and 8.2 rebounds. Of that group, only Auburn did not make the tournament field.

And this is not a Gonzaga team with great interior depth aside from Timme and backup Anton Watson. Even without the guard-oriented lineup, the Bulldogs still averaged 50.5 points per game in the paint during the regular season, the most in the past 15 years. That was largely due to Timme.

The Bulldogs had 38 points in the paint against Norfolk State and another 34 against Oklahoma.

Watson has played well in both games, including 17 points against Norfolk State, and played 18 solid minutes off the bench against Oklahoma. He could be an important complementary piece for the Bulldogs the rest of the tournament.

“This team needs that desperately out of Anton. We’ve been asking and begging, yelling and doing whatever we got to do to try to get him more aggressive and more assertive in every phase of the game, quite frankly,” Gonzaga coach Mark Few said. “Shooting, driving, making post moves, rebounding, defending the rim, all of those. Just kind of hustling.”

Gonzaga’s lack of depth on the front line may not matter in the round of 16 against Creighton. The Bluejays don’t have a player in their primary eight-man rotation taller than 6-foot-7.

And while Creighton will certainly be a challenge for the Bulldogs, it's hard not to look ahead and what might loom in the regional final and a potential matchup against Southern California, should both the Trojans and Zags advance.

The Trojans are led by 7-footer Evan Mobley, the Pac-12 player of the year, and his 6-foot-10 brother Isaiah. It would be another formidable frontline for Timme and the Bulldogs to face.

“There are a lot of good teams out there and when you play them on the biggest stage and it’s just one game, it’s not a seven-game series, anything can happen,” Few said.