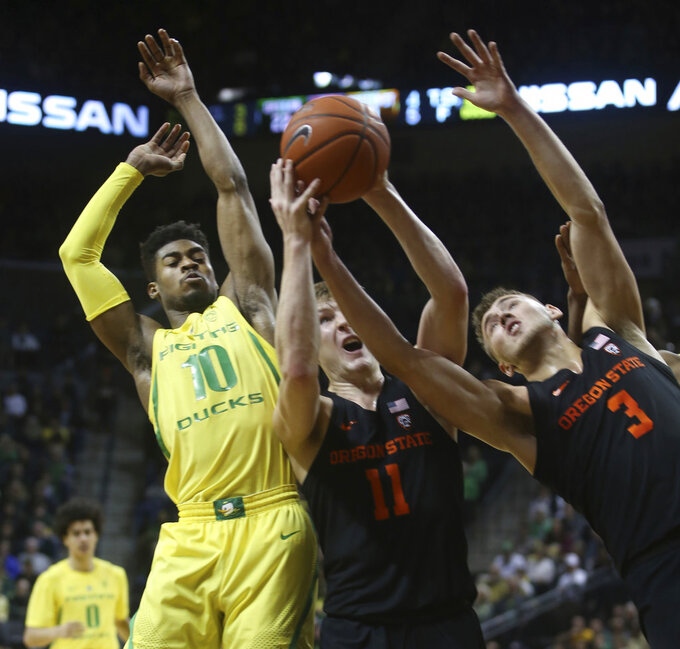 Oregon's Victor Bailey Jr., left, goes up for a rebound against Oregon State's Zach Reichle and Tres Tinkle during the first half of an NCAA college basketball game Saturday, Jan. 5, 2019, in Eugene, Ore. (AP photo/Chris Pietsch) 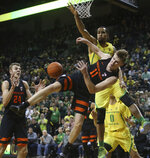 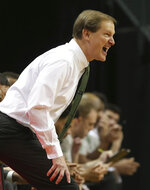 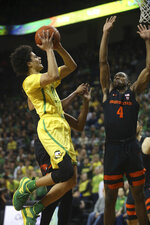 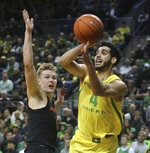 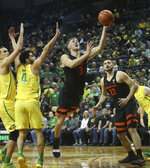 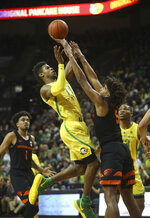 EUGENE, Ore. (AP) — Oregon State coach Wayne Tinkle had one thought when he saw his leading scorer grimacing in pain under the Beavers' basket.

So when Tres Tinkle walked gingerly toward the bench, his father greeted him with a quick backhand to the backside.

Tres Tinkle scored 16 of his 28 points in the second half and Oregon State held off Pac-12 preseason favorite Oregon 77-72 on Saturday night.

"He rolls his ankle and I thought, 'Here we go,'" Wayne Tinkle said. "I don't know how much he scored after he came back, but I thought his defense presence and rebounds were key.

"And I know the team was a lot more relaxed once he got back out there."

The younger Tinkle limped through most of the second half to lead the Beavers (9-4, 1-0) to their first road win in a conference opener in 26 years. The 6-foot-8 junior shot 9 for 15, including 4 of 8 from 3-point range, and made all six of his free throws.

Ethan Thompson added 13 points for OSU, and Stephen Thompson Jr. had 10. Thompson Jr. and Tinkle had eight rebounds each to help give the Beavers a 38-29 edge on the boards.

Tres Tinkle scored 11 points after injuring his left ankle on a baseline drive early in the second half that put the Beavers up by 17. It wasn't long before he was back on the floor.

"He's tough," Thompson Jr. said. "We knew that his will to win is amazing and we knew he was going to be able to play through it."

"His maturity, his leadership (are) really starting to carry throughout this team," Wayne Tinkle said of his son. "He tempered it a little bit his first couple of years, and now I think he really feels comfortable in his skin."

Oregon State made its last eight free throws and 19 of 21 overall to hold off a furious rally by the Ducks (9-5, 0-1), who led four times after trailing by 18 points early in the second half.

Zach Reichle's two free throws put the Beavers up 73-72 with 47 seconds left as they scored the last six points at the foul line.

"We wanted to try to get Lou a shot, but we didn't want that step-back," Oregon coach Dana Altman said. "We had plenty of time, (but) he didn't have it and should have penetrated and looked for a kick (out) or drove all the way to the basket. We just didn't get the look we wanted."

The Ducks were down to eight scholarship players after losing Bol Bol for the season to foot surgery, Kenny Wooten for a month to a broken jaw and Abu Kigab forever with his decision to transfer.

"It's kind of been our M.O." Altman said. "We don't play well in the first half, get down and try to come back in the second half.

"We just didn't play very well. We're not translating anything from the practice floor to the game floor."

Oregon's full-court press stopped the Beavers cold on three straight inbound plays in the second half during an 8-0 run that cut OSU's lead to 66-65. The Ducks went ahead for the first time since early in the first half on King's two free throws with 3:49 left.

Oregon State gets a big boost to start the Pac-12 season with the road win and the return of 6-11 Gligorije Rakocevic from a foot injury. In his second game back, Rakocevic and 7-0 Kylor Kelley combined for 15 points and eight rebounds as the Beavers finished with a 34-30 edge in points in the paint.

Oregon finds itself in scramble mode as it works to adapt to the absence of Bol and Wooten. King, the team's other five-star recruit, showed more of an offensive threat but finished 6-of-17 shooting. Another freshman, Francis Okoro, started for the second straight game but went scoreless.

Wayne Tinkle said the win would help "erase some of those things (outsiders) were talking about" concerning Oregon State's six-year losing streak in Eugene. "I love the way our chemistry's going right now, the way we have each other's back and we're starting to fight out of some things," he said.

The Ducks have used six different starting lineups this season involving 10 of their 11 scholarship players. That's the most in Dana Altman's nine seasons as coach. . Referee Steve OIson called a timeout with 11:23 left in the first half after injuring his leg. Chris Rastatter and Tom Nally finished the game as a two-man crew. . OSU's Zach Reichle made his first start after 42 games off the bench in place of fellow sophomore Alfred Hollins, who'd started the first 12 games.