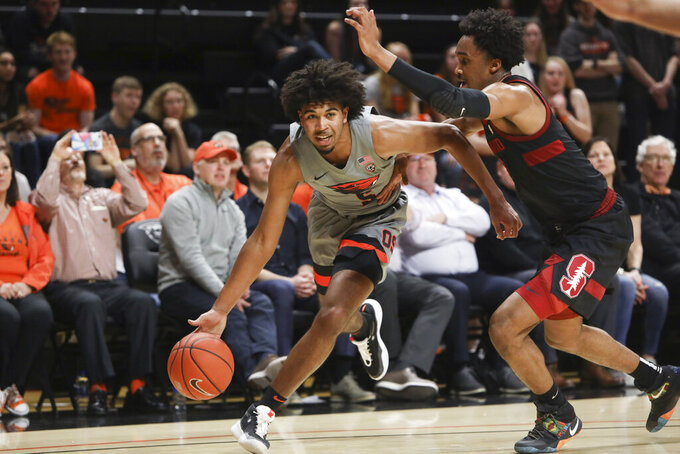 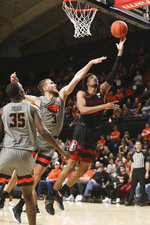 CORVALLIS, Ore. (AP) — On a night when Tres Tinkle became Oregon State’s all-time leading scorer, the senior forward scored 23 points to lead the Beavers to 68-65 victory over Stanford on Thursday.

Tinkle’s 3-pointer with 8:43 remaining gave Oregon State its biggest lead at 56-46, but the Cardinal rallied.

Stanford closed to 61-58 on Oscar da Silva’s layup with 4:34 left, but the Cardinal’s leading scorer fouled out a minute later.

Jaiden Delaire’s layup brought Stanford within one point at 62-61 with 1:49 left.

Tyrell Terry’s jumper gave the Cardinal a 65-64 advantage with 33 seconds remaining – their first lead since late in the first half.

Tinkle made two free throws with 17.6 seconds left to put Oregon State back on top 66-65.

Terry missed a 15-foot jumper from the right baseline and Tinkle grabbed the rebound and was fouled with four seconds left. He made both ends of the double bonus, extending the lead to 68-65.

Stanford called a timeout after advancing the ball to midcourt with 3.1 seconds on the clock. Isaac White’s 30-foot 3-point attempt bounced off the rim at the buzzer.

Oregon State started the second half on a 9-2 run culminated by Thompson’s 3-pointer, extending the lead to 43-34.

Da Silva went to the bench after picking up his fourth foul at the 13:44 mark and the Beavers leading 46-38.

Tinkle scored Oregon State’s final eight points of the first half as the Beavers took a 34-32 at the break. Neither team led by more than five points in the first half.

After a slow start, Tinkle scored 12 first-half points in the final seven minutes.

Stanford: Stanford, considered an NCAA Tournament bubble team, would enhance its credentials with a win at No. 13 Oregon on Saturday. The Cardinal defeated Oregon 70-60 at home Feb. 1. … Stanford’s last appearance in March Madness came in 2014.

Oregon State:. Tinkle’s 3-pointer with 2:55 remaining in the first half moved him past Gary Payton as the Beavers’ all-time leading scorer. Payton offered his congratulations at halftime on the Beavers’ video board. … Tinkle now has 2,190 career points and also extended his school record for consecutive double-figure scoring games to 94.

Stanford will be at No. 13 Oregon on Saturday.