TIPPING OFF: Peacocks looking to strut their stuff vs Purdue 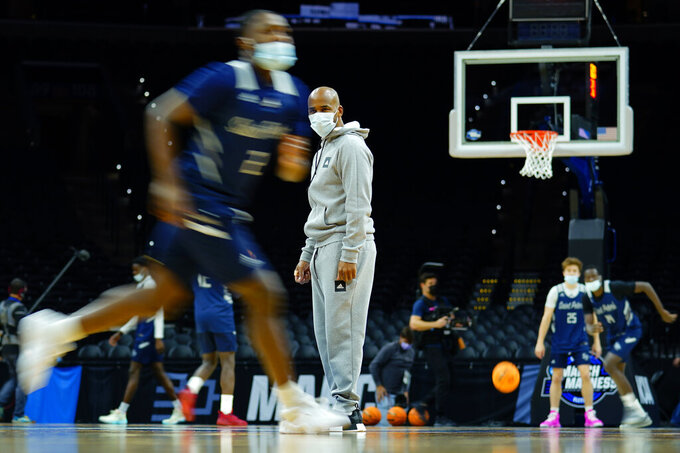 A look at what’s happening in the NCAA Tournament today:

This is where the Saint Peter's storybook run should end, right? Powerful Purdue with 7-foot-4 Zach Edey is favored by 12 1/2 points, according to FanDuel Sportsbook. But this is March, and anything can happen.

Count on fans all around the country, plus a packed arena in Philadelphia, to be rooting for an upset in this East semifinal. No doubt plenty will drive down the New Jersey Turnpike to pull for the Peacocks to become the first 15 seed to make the Elite Eight. As it is, they're only the third team seeded so low to go so far.

Saint Peter's plays great defense, but will have to get creative to keep third-seeded Purdue in check. The Big Ten Boilermakers have weapons all over the court in likely NBA lottery pick Jaden Ivey, 6-10 Trevion Williams, deadeye 3-point shooter Sasha Stefanovic and Edey.

For the little team from Jersey City, New Jersey, a lot of eyes will be on plucky point guard Doug Edert. Especially his mustache, which has attracted so much attention it now has its own Twitter account.

UCLA's Jaime Jaquez Jr., who sprained his right ankle in the second round against Saint Mary's, is hopeful he'll be able to play in the fourth-seeded Bruins' East semifinal against No. 8 seed North Carolina.

“He’s going to want to try to play,” UCLA coach Mick Cronin said. “The question is can he be effective? Playing is one thing. Can he play well?”

LET'S PLAY AT MY HOUSE

Providence coach Ed Cooley says the Friars' game against No. 1 seed Kansas in a Midwest semifinal is a great chance to show their stuff. He also wishes his team could play more of the sport's biggest brands.

Asked Thursday why the Friars don't schedule more high-profile programs, Cooley said, “The reason we don’t play the bluebloods is because they don’t want to come to the Dunkin’ Donuts Center. Let’s call it exactly what it is. We’d love that opportunity and embrace that opportunity.”

Among the all-time winningest programs, excluding those that currently or previously played in the same conference as Providence, only North Carolina has played on the Friars' home court. That was in 1978.

You’ve got to admire Tyrese Hunter’s confidence — and courage.

The freshman did the unthinkable upon his arrival at Iowa State last summer. He told his teammates to call him “General.”

“I was like, ‘Who is this kid coming in and giving himself a nickname? I ain’t never heard of that,” teammate Izaiah Brockington said.

Hunter, whose 11th-seeded team plays No. 10 seed Miami in Chicago, said he started calling himself the “General” at a young age and that the reason is self-explanatory.

“As a point guard, you’ve got to demand the game, control the game,” he said. “These guys, they took it on and they took it serious, like you’re the ‘General,’ you’re the one that keeps everybody under control throughout the game. So it was big. It started as a joke, but now I feel like that’s something people see me as.”

Hunter is third in the Big 12 in both assists and steals and was chosen the conference’s freshman of the year. His teammates say his nickname has stuck.

“Tyrese has done a great job taking control of the game on offense and defense and bringing everybody together,” guard Gabe Kalscheur said. “He’s the one -- he’s the general on the floor, like his name is.”

The Chicago native started out at California, transferred to Kansas and then back to the Windy City to play at DePaul to help his family care for his dad, Curtis, who had a stroke in 2015. Then, with his father's encouragement, it was on to Miami for his final year.

Now he's back in his hometown to play Iowa State. The point guard played one of his best games of the season in the second round with 15 points, eight assists and nine rebounds in an upset of Auburn.

“It’s been a unique experience with me,” he said. “But going through what I went through, going from college to college, I’ve learned a lot. I don’t regret anything. It made me who I am today as a person and I’m pretty happy with who I am.”