TIPPING OFF: Texas Tech 'D' is next hurdle for Coach K, Duke 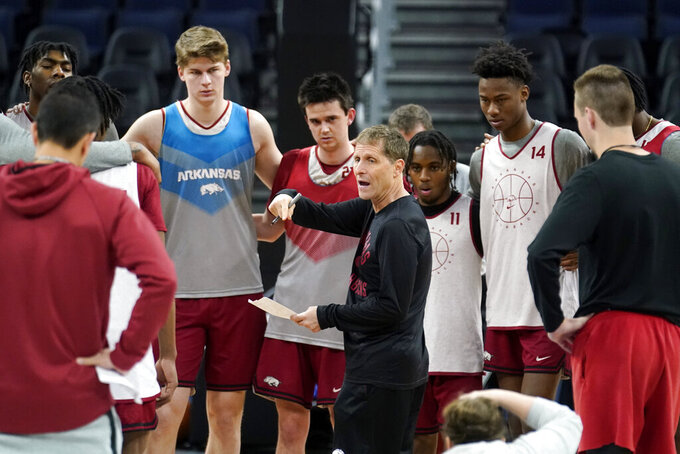 A look at what's happening in the NCAA Tournament as the Sweet 16 begins Thursday:

Duke coach Mike Krzyzewski's 26th, and final, appearance in the NCAA Sweet 16 is a classic matchup of offense vs. defense in the West Region semifinal in San Francisco.

The Blue Devils are scoring better than 80 points per game, freshman star Paolo Banchero is at the top of his game and the 7-foot-1 Mark Williams has been great on both ends of the court.

Texas Tech's top 10 field-goal defense and scoring defense can cover for its offensive shortcomings. Never mind the school tournament record 97 points the Red Raiders scored against Montana State in the first round. The 59-53 win over Notre Dame was a truer picture of how coach Mark Adams' rugged team plays.

DON'T I KNOW YOU?

If a Villanova vs. Michigan meeting in San Antonio sounds familiar, there's a reason — this South semifinal is a rematch of the 2018 championship game, also played in the Alamo City.

Collin Gillespie, Jermaine Samuels and Dhamir Cosby-Roundtree are still with the second-seeded Wildcats from their 79-62 victory in that title tilt. Eli Brooks is the only holdover for the 11th-seeded Wolverines.

Brooks said his college choices coming out of high school were Michigan and Villanova.

“So this is a big matchup for me,” Brooks said Wednesday. “To get the win back in the same place that we lost the national championship game. ,.. but I’m not going to make it personal about myself. It’s about moving on to the next round. It just happens to be Villanova back in San Antonio.”

Gonzaga star Drew Timme, who will play against Arkansas in the West semifinal in San Francisco, treaded into an NCAA tricky spot when he landed a name, image and likeness deal with a Washington state casino.

Timme has been appearing in ads for Northern Quest Resort & Casino since November. The NCAA, which always has taken a hard stance against all forms of sports wagering, has left it to the schools to set parameters for athlete branding. Northern Quest is one of Gonzaga's longtime sponsors, and the casino does not take bets on games involving teams from the state.

Asked about his deal Wednesday, Timme said, “Well, every time I walk into the gym, I see a big Northern Quest logo, so I didn’t think too much of it, honestly. No, they’re a great partner I have. They really are good with the community and everything, and they’re really tied into a lot of things in Spokane. ... I think they have a lot more than just gambling. So that’s why I really liked them.”

Arkansas coach Eric Musselman is never shy about saying what's on his mind. When it comes to the matchup with Gonzaga, the No. 1 overall seed, he's playing the no-respect card.

The Razorbacks are the No. 4 in the West and realize the Zags are getting most of the attention.

“When we do a film session, there’s stuff spliced in on what people have said, 1,000%. I don’t mind conveying that,” Musselman said. “We understand the respect factor for us in this particular game is kind of nonexistent from a national perspective. Yeah, our guys are going to see it, hear it, all the way up until tipoff.”

Arizona guard Bennedict Mathurin said he has attempted to apologize to a TCU dance team member after a video widely circulated on social media showed the Pac-12 player of the year possibly making contact with her after a second-round victory.

Mathurin didn’t say what response, if any, he got from an email he sent through the TCU athletic department when trying to relay his apology. He wouldn’t answer a follow-up question about whether he recalled touching the dancer or not when leaving the floor after the overtime victory over the Horned Frogs on Sunday night.

The short video clip shows Mathurin stopping and looking up toward the stands, and then after a bow he raises up with his arms spread fully apart. As he turns toward the tunnel, he appears to be looking the opposite way with his arms still outstretched when his left hand goes near the woman’s chest, though it is unclear if there is any contact.

“We have been in contact with the University of Arizona and received communication from their student-athlete,” TCU athletic director Jeremiah Donati said. He did not elaborate.