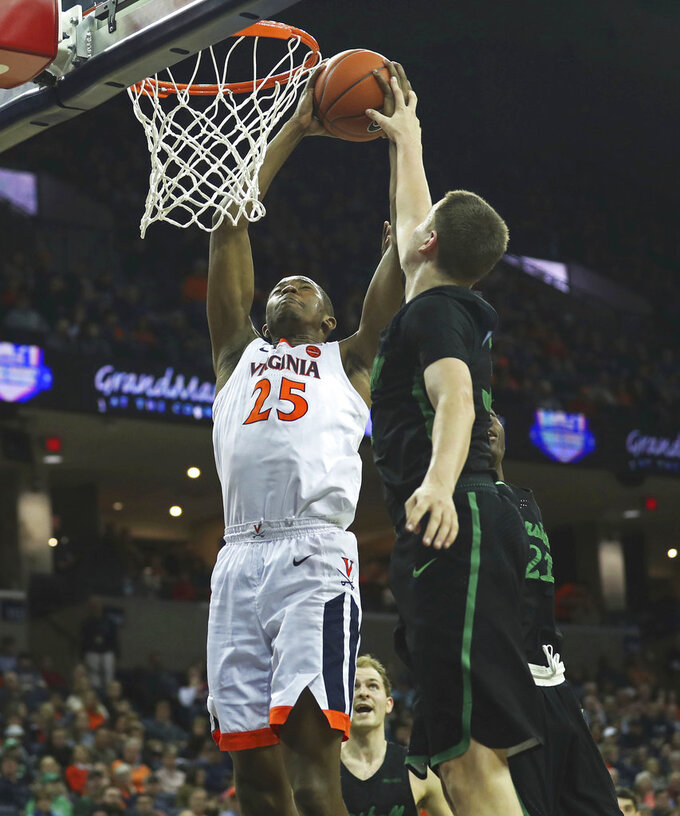 RALEIGH, N.C. (AP) — It's time to find out just how well the nonconference schedule has prepared AP Top 25 teams for the rigors of league play.

Four of the power conferences — the Atlantic Coast, the Southeastern, the Big 12 and Pac-12 conferences — will play their first league games this week, while the Big Ten and Big East already have squeezed in a few. The list of matchups includes a top-10 contest between No. 4 Virginia and No. 9 Florida State in the ACC and eighth-ranked Michigan State visiting No. 14 Ohio State in the Big Ten.

It's a meatier schedule following Monday's poll than last week, when there were no matchups between ranked teams, with five Top 25 teams not even taking the court because of Christmas.

The Cavaliers (12-0) are still unbeaten after Monday's win against Marshall, and Saturday's home game against the Seminoles will be the first step in their bid to sweep the ACC regular-season and tournament titles outright for a second straight season.

"I told (the players) we always break up our team into different phases and we were undefeated in Phase 1," coach Tony Bennett said after Monday's win. "That's no small thing, we just wanted to try and win every game and they did that. Now we go into Phase 2, conference play, and we understand how good the league is and we'll have to continue to improve."

The Spartans and Buckeyes are in similar positions. Both are 2-0 in the Big Ten. And neither has lost since the ACC/Big Ten Challenge as they enter the week, winning a combined 12 in a row.

Michigan State gets two league games this week, starting with Wednesday's home game against Northwestern. Then comes Saturday's trip to Columbus to face the Buckeyes, who have taken two of the past three meetings since the 2015-16 season.

SUNDAY IN THE BIG TEN

The Big Ten has a national-best seven teams in the latest AP Top 25, so it's no surprise that the league has multiple ranked-vs-ranked matchups. In addition to Michigan State-Ohio State, Sunday will feature second-ranked Michigan against No. 21 Indiana, while No. 24 Nebraska faces No. 25 Iowa.

The Cornhuskers were the lone addition to the latest poll, though that merely continued their in-and-out ways. They made their first poll appearance of the season at No. 24 on Dec. 3, fell out for a week, re-entered at No. 25, then fell out of last week's poll.

Oklahoma has been able to handle the loss of national scoring and assists leader Trae Young through the opening part of the season behind stepped-up play from Christian James (17.9 points per game) and KenPom's No. 8-ranked defense (90.2 points allowed per 100 possessions).

The 23rd-ranked Sooners will have a tough Big 12 opener with Wednesday's trip to No. 5 Kansas in the week's other matchup of ranked teams.

Duke stayed at No. 1 as part of an unchanged top dozen atop the AP Top 25. The Blue Devils, who received 35 of 64 first-place votes, will have had more than two weeks off by the time they open ACC play on Saturday at home against Clemson.

Marquette, ranked No. 16, faces a dangerous road game in the Big East to open league play with a trip to one-loss St. John's on New Year's Day. That game will feature a pair of top-tier scorers in Marquette's Markus Howard (ranked fifth nationally at 25.1 points per game) and St. John's Shamorie Ponds (18.7 points).

Arizona State fell out of the poll from No. 17 by losing to Princeton following an upset of Kansas, leaving the Pac-12 with no ranked teams for the first time since the 2011-12 season. But the Sun Devils are hovering just outside the Top 25 entering Thursday's game against Utah.

Kansas State could play its way into next week's poll by winning at No. 11 Texas Tech on Saturday.