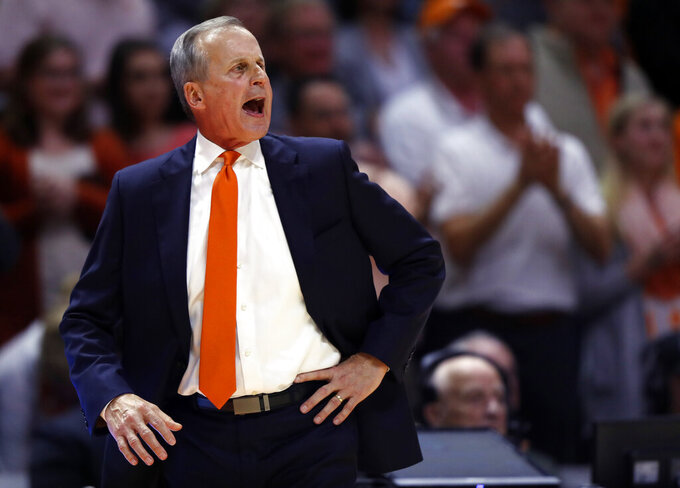 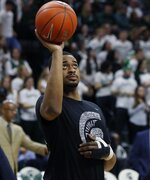 RALEIGH, N.C. (AP) — Teams in the AP Top 25 are down to their final chances to make their case for high seeds in the NCAA Tournament.

Those could come in their league tournaments, with brackets that could set up marquee matchups to boost the best postseason resumes with Selection Sunday looming at the end of the week.

The marquee tournament of that group will be in the Atlantic Coast Conference, which boasts three top-five teams in No. 2 Virginia, No. 3 North Carolina and No. 5 Duke. The Southeastern Conference also has three top-10 teams in No. 4 Kentucky, No. 8 Tennessee and No. 9 LSU. Meanwhile, No. 6 Michigan State (Big Ten), No. 7 Texas Tech (Big 12) and No. 11 Houston (American Athletic Conference) are headlining their own brackets.

Here are some of the top storylines to watch this week for ranked teams:

Virginia and UNC shared a regular-season title, but Duke could have the most to gain in Charlotte, North Carolina.

The Blue Devils (26-5) have played nearly six full games without freshman star Zion Williamson, a candidate for national player of the year who has been out with a knee sprain. Duke went 3-3 without the 6-foot-7, 285-pound walking highlight reel — including two losses to the rival Tar Heels.

If Williamson is healthy and back to full strength, Duke could go back to the version that spent a national-best seven weeks at No. 1 in the AP Top 25 poll this year. That group has lost just once at full strength, falling to current No. 1 Gonzaga in the Maui Invitational championship game, while handing Virginia its only two losses.

That's why Krzyzewski had a simple answer on what his team needs to reach its potential.

"Just to be together," he said after Saturday's loss to UNC. "They've shown that when they're together, they're very good."

LSU has the No. 1 seed and Kentucky has won four straight titles, but Tennessee sure looked like the league favorite for much of the season.

Now the Volunteers have to figure out how to find that same edge.

Tennessee (27-4) reached 23-1 and spent four weeks at No. 1 in the AP poll, but has lost three games in the past month to enter the tournament in Nashville, Tennessee, as the No. 3 seed.

"We knew coming down the stretch that we were in that gauntlet kind of schedule," Tennessee coach Rick Barnes said, adding: "When you look back at where we are today, these guys have a lot to be proud of, and the fact that we're disappointed is a good thing for our program."

Duke isn't the only team that could get a boost with a return from injury.

Michigan State coach Tom Izzo said Nick Ward — who has been out nearly a month after hand surgery — will go through contact practices this week ahead of the Big Ten Tournament in Chicago.

Izzo said he expected the 6-9 junior would play, though it's unclear how much. Ward is the Spartans' No. 2 scorer (15.1 points) and No. 3 rebounder (6.7), providing an interior presence to complement point guard Cassius Winston — who helped guide the Spartans to a share of the Big Ten regular-season title despite losing Joshua Langford to a season-ending foot injury.

So how will No. 17 Kansas react to the end of its 14-year run of winning at least a share of the Big 12 regular-season title?

The preseason No. 1 Jayhawks (23-8) open play in the Big 12 Tournament as the No. 3 seed against Texas in Thursday's quarterfinals, part of a drama-filled season that included losing 7-footer Udoka Azubuike to injury and senior guard Lagerald Vick leaving the team for personal reasons.

Houston (29-2) won the American's regular-season title by two games over No. 24 Cincinnati. The Cougars will now try to win their first AAC Tournament title to go with it after losing by a point to the Bearcats in last year's final.

Kelvin Sampson's Cougars, the top seed in Memphis, have the most wins for the program since the 1984 team led by future NBA star Hakeem Olajuwon won 32 games and reached the NCAA title game.