Top freshmen forge their own paths in picking schools 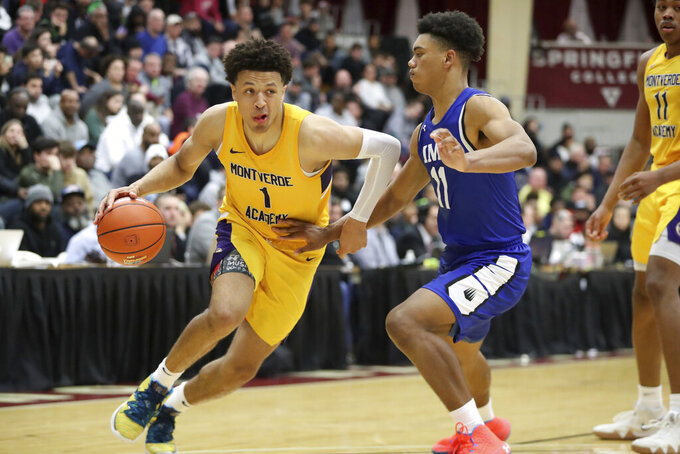 FILE - In this Jan. 19, 2020, file photo, then-Montverde Academy's Cade Cunningham (1) drives against an unidentified IMG Academy defender during a high school basketball game at the Hoophall Classic in Springfield, Mass. Oklahoma State could have a year to remember, even if it doesn’t end in the NCAA Tournament. Freshman point guard Cade Cunningham, a preseason Associated Press All-American, stayed at Oklahoma State despite the NCAA banning the Cowboys from postseason play this season. (AP Photo/Gregory Payan, File)

Many of the nation’s brightest prospects in the most recent recruiting class didn’t necessarily select the most obvious schools.

Kentucky, Duke and Kansas have landed many of the notable one-and-done performers over the last decade. But according to composite rankings of recruiting sites compiled by 247Sports, those three schools landed only two of the top 12 recruits in this year’s freshman class: Kentucky guards Brandon Boston Jr. (No. 5) and Terrence Clarke (No. 8).

Jerry Meyer, the director of basketball scouting at 247Sports, says he noticed this trend starting in 2015. That’s the year four of the top eight recruits selected LSU (Ben Simmons), California (Jaylen Brown and Ivan Rabb) and Mississippi State (Malik Newman). One year earlier, seven of the top 13 prospects had chosen either Duke, Kentucky or Kansas.

“That was when like, boom, things started to change,” Meyer said. “That’s when it got in my consciousness, that we’ve got a phenomenon starting here, and it’s continued.”

Kentucky, Duke and Kansas are still obviously getting their share. Kentucky had the nation’s No. 1 2020 class and Duke ranked third, while Kansas signed the nation’s No. 21 prospect in guard Bryce Thompson. But other schools are attracting elite talent as well.

That list starts with Cade Cunningham, the nation’s No. 1 recruit last year. Cunningham chose Oklahoma State and stuck with the Cowboys even when they received a postseason ban from the NCAA as part of the federal corruption investigation into college basketball.

“At first it was tough when they made the ruling,” Cade Cunningham said this summer. “All your emotions are running super high, you want to explore your options and everything. After kind of settling down and really looking into everything, at the end of the day, Coach Boynton was who I wanted to play for.”

Here’s a rundown of some freshmen who should make an impact this season:

No. 21 Florida State lists Barnes as a guard even though he’s 6-foot-8. Seminoles assistant coach Charlton Young calls Barnes “the kind of guy that comes once every 25 years” with his combination of size, athleticism and unselfishness. Barnes is ranked seventh in the 247Sports Composite and played high school basketball at Montverde (Florida) Academy. Meyer said Barnes doesn’t shoot well but is “elite in all other categories.”

This 6-foot-7 guard from Norcross, Georgia, played at Sierra Canyon in Chatsworth, California. He was named the California male athlete of the year and the California basketball player of the year by USA Today. Boston already has earned first-team honors on the media’s preseason all-Southeastern Conference team. He should team up with Clarke to form a dynamic backcourt for the 10th-ranked Wildcats. Another Southeastern Conference guard duo to watch is the Tennessee tandem of Jaden Springer and Keon Johnson.

Although Cunningham hasn’t played a college game yet, the 6-8 guard still made the Associated Press preseason All-America team. He’s from Arlington, Texas, but played with Barnes at Montverde Academy and was named the Naismith high school player of the year. Meyer calls him a “do-everything-type player” and says Cunningham reminds him of the way Brandon Roy used to play before getting injured.

This 7-footer was rated as the nation’s No. 3 prospect in his class by the 247Sports Composite. He won the 2020 Morgan Wooten high school player of the year award his senior season at Rancho Christian in Temecula, California. He was a two-time California Gatorade player of the year. He’s the younger brother of USC sophomore forward Isaiah Mobley. “Evan is a special talent,” USC coach Andy Enfield said. “Seven feet tall, runs like a guard and very skilled. Great passer for his size.”

Suggs joins the nation’s top-ranked team as the No. 11 prospect in the 247Sports Composite. The former high school quarterback at Minnehaha Academy in Minneapolis was the first athlete in Minnesota history to be named Mr. Football and Mr. Basketball in the same year. The 6-4 guard averaged 23.5 points, 3.2 rebounds, 5.1 assists and 3.8 steals his senior year. “He brings a physical, modern-day point-guard dominant presence out there,” Meyer said. “I think he’s going to be huge for Gonzaga, give Gonzaga something they kind of have never had at point guard before.”

This 6-foot-8 forward played with Kentucky’s Boston at Sierra Canyon. He’s rated as the nation’s No. 6 prospect in the 247Sports Composite. Stanford coach Jerod Haase says Williams “has the unique ability to score on all three levels, and his versatility as a defender is elite.”

“He can create a shot, make a shot,” Meyer said. “He’s not the most physical guy, so I don’t know that he’ll have the physicality off the bat. He’s a questionable one-and-done because of that, but his upside is so great.”