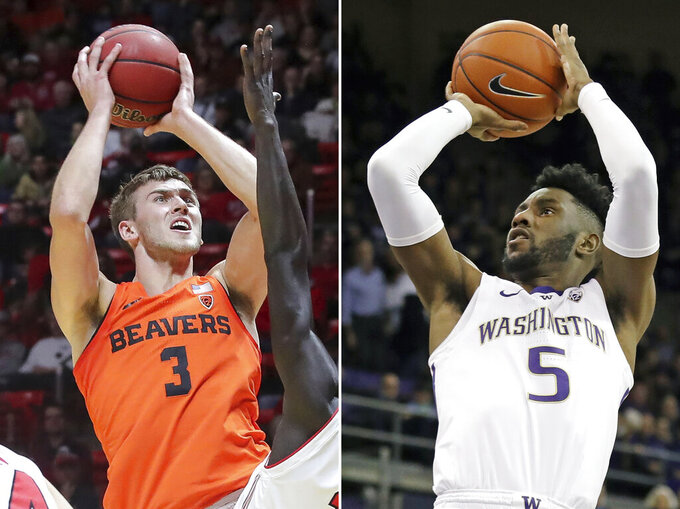 FILE - At left, in a Feb. 2, 2019, file photo, Oregon State forward Tres Tinkle (3) shoots against Utah during the first half of an NCAA college basketball game, in Salt Lake City. At right, in a Jan. 17, 2019, file photo, Washington's Jaylen Nowell (5) shoots during the first half of the team's NCAA college basketball game against Stanford, in Seattle. The top conferences in college basketball are wrapping up regular-season play, along with the races to determine each league’s player of the year. Washington has long since wrapped up the regular-season Pac-12 title behind sophomore Jaylen Nowell. Oregon State forward Tres Tinkle (20.5 points, 8.0 rebounds) would be the likely top contender.(AP Photo/File)

RALEIGH, N.C. (AP) — The top conferences in college basketball are wrapping up regular-season play, along with the races to determine each league's player of the year.

The five power conferences — the Atlantic Coast Conference, Big 12, Big Ten, Pac-12 and Southeastern Conference — conclude regular-season play this weekend. Here's a look at the players in the running for top honors in those leagues:

Duke freshmen RJ Barrett and Zion Williamson are 1-2 in the league in scoring. They could end up that way for top ACC player, too.

The 6-foot-7, 285-pound Williamson (21.6 points, 8.8 rebounds) looks likely to be the No. 1 overall NBA draft pick if he leaves school, but he hasn't played since suffering a knee sprain early in last month's loss to North Carolina.

"You can't put together a well-oiled machine in a couple practices to play in this conference ... when you lose a kid like that," Duke coach Mike Krzyzewski said. "And there is no other kid like that. He's probably the national player of the year."

That's where Barrett comes in for the fourth-ranked Blue Devils.

The ACC's leading scorer (23.3 points) is averaging 24.5 points, 6.0 rebounds and 5.8 assists in the Last four games with Williamson out while setting Duke's freshman single-season scoring record.

De'Andre Hunter (15.4 points) for second-ranked Virginia and Cameron Johnson (16.9 points) for third-ranked UNC are also candidates from the league's co-leaders.

Yet No. 13 Kansas has reached the end of its remarkable 14-year run of claiming at least a share of the Big 12 regular-season title. Now it's Culver's eighth-ranked Red Raiders and Brown's 18th-ranked Wildcats tied atop the league standings, which could give one of them a bump in the individual race.

The junior guard is third nationally in assists (7.6) while averaging 18.8 points and shooting 42 percent from 3-point range. He's also been Big Ten player of the week five times, joining Purdue's Glenn Robinson and Caleb Swanigan, along with Ohio State's Evan Turner, as the only players in league history to do so at least five times in a season.

"He gets into nooks and crannies," Michigan coach John Beilein said after Winston had 27 points and eight assists against the Wolverines last month. "His midrange game is one of the very tops in the country."

Winston has kept the Spartans positioned for a regular-season title entering Saturday's finale against No. 7 Michigan. That could give him the edge on league-leading scorer Carsen Edwards (23.4 points) for No. 11 Purdue.

Washington has long since wrapped up the regular-season title in a down year for the Pac-12 behind sophomore Jaylen Nowell.

The 6-4 guard is averaging a team-best 16.3 points with 5.5 rebounds. He's also been an efficient scorer from anywhere, shooting nearly 51 percent from the field, 44 percent on 3-pointers and 76 percent on free throws.

Nowell has been the Pac-12's player of the week a league-best three times this season for a team that enters the weekend at least four games ahead of every other Pac-12 team in the standings.

Tennessee's Grant Williams is the front-runner amid one of the program's most successful seasons.

The 6-7 junior is first in the SEC in scoring (19.1) while leading the fifth-ranked Volunteers in rebounding (7.6) and ranking second in assists (3.3). He's also shooting nearly 57 percent from the field and 83 percent from the foul line — including a 23-for-23 effort in a 43-point game against Vanderbilt — in a season that included the Volunteers spending four weeks at No. 1 in the AP Top 25.

"I don't think there are many guys in the country who possess the combination of physical and mental toughness, skill level, determination and swagger that he possesses," Florida coach Mike White said in January.

Kentucky's PJ Washington is the biggest competition. The 6-8 sophomore is averaging 14.9 points and 7.4 rebounds, though he's averaging 17.9 points over the last 15 games for the sixth-ranked Wildcats.