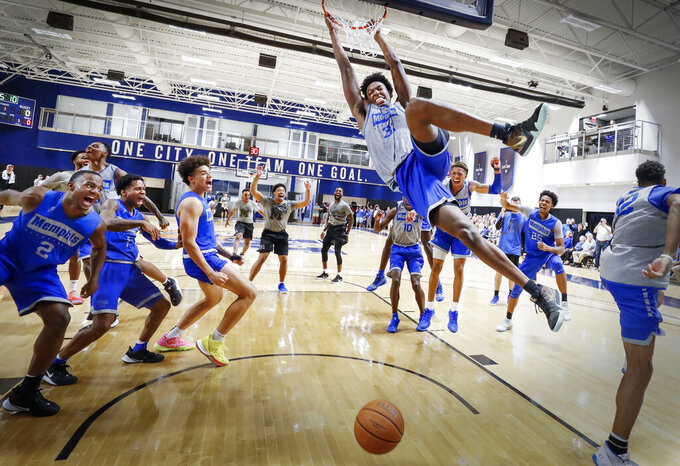 In this Sept. 24, 2019, photo, Memphis center James Wiseman dunks as his teammates celebrate during an open practice for the NCAA college basketball team in front of the Rebounders Club in Memphis, Tenn. Wiseman was selected as a member of The Associated Press preseason All-America team Tuesday, Oct. 22. (Mark Weber/Daily Memphian via AP)

PHOENIX (AP) — Memphis' Penny Hardaway has become one of the nation's top recruiters in two seasons as a college coach.

The former NBA star signed a solid recruiting class in his first year, and his second, headed by projected lottery pick James Wiseman, was No. 1 in the country, according to a composite of ranking sites compiled by 247Sports.

The top-rated class has ratcheted up expectations in Memphis. The Tigers were ranked in The Associated Press preseason poll for the first time since 2013 at No. 14 and picked as co-favorites with Houston to win the American Athletic Conference.

The Tigers face a historical hurdle to get there.

In the one-and-done era, not to mention the yearly exodus of transfers, the best recruiting classes rarely stay together for very long. Incoming freshmen, no matter how talented, still need time to adjust to college life and the college game.

Older teams don't wilt under the pressure because they've been there before. Young teams often take longer to jell.

"Creating habits is what we have to do," Kentucky coach John Calipari said. "We're not trying to break their old habits. They're not changing them. They'll pop up. Create new ones. Create professional habits that will carry you."

The Wildcats have been the standard bearer in the correlation between top recruiting classes and success on the court. Kentucky landed the nation's No. 1 recruiting class six times and was in the top four the other times under Calipari.

The Wildcats won their 2012 title with a group led by freshman Anthony Davis, and the program has reached the Sweet 16 eight times, including four trips to the Final Four.

"None of us coaches in the SEC feel badly for John Calipari and the fact that he has to rebuild his roster every year," Auburn coach Bruce Pearl said. "I'm certainly at the top of that list. John does not get near enough credit for what kind of coach he is."

But Kentucky and Coach Cal also are anomalies.

Virginia won last season's national title with an incoming recruiting class ranked 65th. Villanova's two national titles were with classes ranked 28th and 29th. Connecticut was 37th before winning its 2014 national title and Louisville checked in at No. 79 nationally before its 2013 championship.

Kansas and coach Bill Self consistently have top-level recruiting classes and make deep NCAA Tournament runs, but the Jayhawks' 2008 national title came from an incoming class ranked No. 49.

Arizona has racked up consistent top-10 recruiting classes but has yet to reach the Final Four in 11 seasons under Sean Miller. Programs like UCLA, Ohio State, Syracuse and Texas are typically among the top recruiting classes, but the last NCAA title from that group was the Orange in 2003.

Highly rated recruiting classes certainly make teams better. Having consistency within the program and cohesion, more often than not, is what leads to national championships.

"We really try and find guys that are going to fit this culture," Villanova coach Jay Wright said. "We really try to explain to them what it is and then let them make the decision. Our recruiting is different. It's not the bells and whistles. It's really getting to know the people. The family and the kid and explain to them what this is and have them come here and watch practice and talk with the guys."

Wright brought in a stellar recruiting class for this season, topped by five-star players Jeremiah Robinson-Earl and Bryan Antoine. The Wildcats' 2019 class was fifth in the 247Sports composite, behind Memphis, Kentucky, Duke and Oregon.

Hardaway's 2019 class is arguably the most talked about in college basketball. The 7-foot-1 Wiseman has been projected as the No. 1 overall pick in next year's NBA draft. Forward Precious Achiuwa also could be a lottery pick and five other freshmen come highly rated.

"I think these kids understand what they're reading and they see it and it drives them," Hardaway said. "We'll see how they handle that going out on the court."

The Blue Devils lost in the Elite Eight to Michigan State while Virginia, led by a group of primarily veteran players, won the national title.

It's not always enough to win a national title.