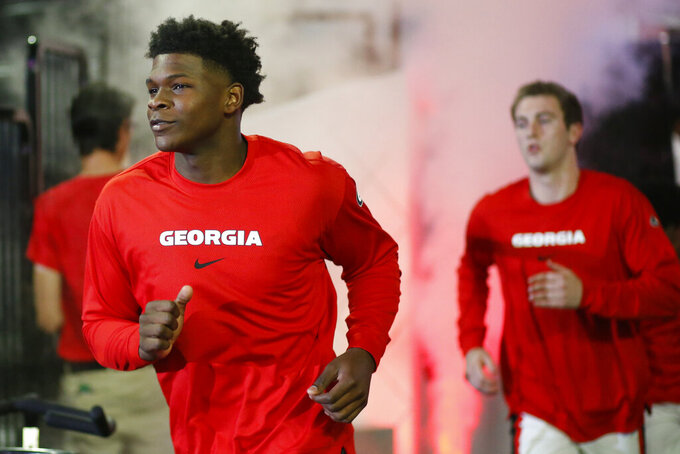 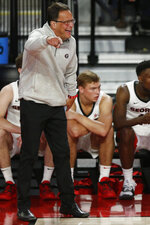 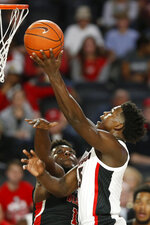 ATHENS, Ga. (AP) — The arrival of Anthony "Ant Man" Edwards has created a buzz at Georgia.

Edwards, perhaps Georgia's most celebrated signee since Dominique Wilkins in 1979, was rated as one of the nation's top two prospects by most recruiting services. He is expected to make an immediate impact in the Bulldogs' second season under coach Tom Crean.

"Ant Man" is a big reason Georgia's season tickets, capped at 5,750 for the 10,523-seat Stegman Coliseum, sold out before the season for the first time in the program's history.

Edwards, a 6-foot-5 guard from Atlanta, became the first Georgia freshman to be voted to the media's preseason All-Southeastern Conference first team. The less encouraging news from the SEC's media days was the prediction Georgia will finish ninth in the league.

Clearly, there are lingering doubts about a Georgia team which lost its best player, forward Nicolas Claxton, from a team which finished 11-21 overall and 2-16 in the SEC.

Edwards could follow Claxton to the NBA after only one season, so the talented freshman's window to help the Bulldogs become relevant may be small.

Crean has only five returning players, including junior forward Rayshaun Hammonds and senior guard Tyree Crump, on his revamped roster.

"We're really trying to find what our identity is going to be," Crean said, adding he wants his players to be versatile and able to play different spots on the court.

"The majority of our time has been playing a lot of position-less basketball, so that they get comfortable on the floor," he said.

Crean is listing all his players as playing a "B'' position, as in basketball players, instead of forwards, guards and centers.

"It's new to me, and that's what they are," Crean said. "It's not valid to call them centers and power forwards and things like that as much with the way that we're trying to play. They're being trained as basketball players, every day."

"I was trying to get my feel for the game," Edwards said. "I'm just going to do me, so I just started playing my game."

Some other things to know about Georgia heading into the season:

Crump says Edwards is his "little brother" on the team. "As soon as he walked through the door I knew we would click right away," Crump said. "I could just tell. He had a swag about him. You got a guy that got swag about him. He is confident. This is my type of guy."

The 6-foot-9 Hammonds is Georgia's leading returning scorer. He averaged 12.1 points while scoring in double figures in 20 of 27 games before suffering a season-ending foot injury. The junior is healthy to start the season.

Another freshman to watch is 5-foot-10 Sahvir Wheeler, who had eight points and a team-leading eight rebounds in the exhibition opener. Wheeler, from Houston, was a four-star recruit. "I thought Sahvir Wheeler came in and changed the dynamic of the game," Crean said.

There are nine freshmen, including seven on scholarship, on the roster. Crump and guard Jordan Harris are the only seniors, while Gresham also is in his final year of eligibility as a graduate transfer.

Georgia opens its season at home against Western Carolina on Nov. 5. It will be the first matchup between the teams since the Bulldogs' 65-63 win on Dec. 21, 2013. Georgia leads the series 6-0.

The Bulldogs open with four straight home games, including a visit from Georgia Tech on Nov. 20. Georgia then opens its Maui Invitational schedule by playing Dayton on Nov. 25, followed by a game by either Michigan State or Virginia Tech. Other nonconference highlights include games at Arizona State on Dec. 14 and at Memphis on Jan. 4.

Georgia opens its SEC schedule at home against Kentucky on Jan. 7.