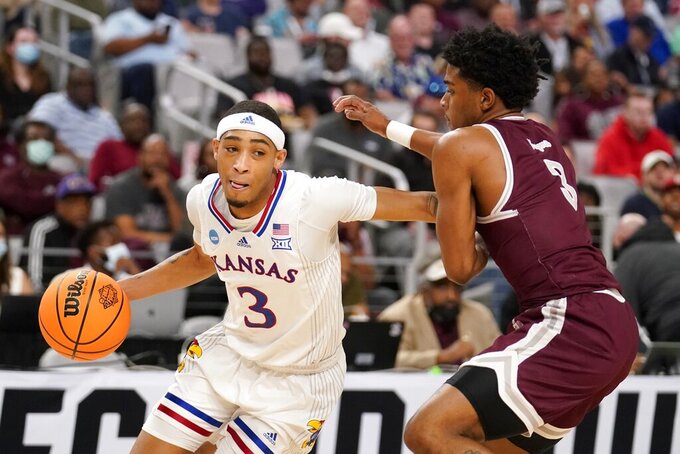 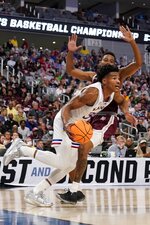 FORT WORTH, Texas (AP) — Top-seeded Kansas opened its 50th NCAA Tournament the way it has so many times in the past, with a lopsided victory.

Remy Martin had 15 points and Christian Braun 14 to pace five Jayhawks scoring in double figures in an 83-56 victory over Texas Southern on Thursday night.

"It was a good team win, certainly one that I'm glad we got, especially in this crazy tournament and this crazy day," said Kansas coach Bill Self after one of the last of games to finish on a wild opening tourney day when a No. 11 seed, two No. 12s and a No. 15 won games.

Southwestern Athletic Conference champion Texas Southern (19-13), the No. 16 seed which won a First Four game two nights earlier, had its only lead against the Big 12 champs after Bryson Etienne made its first shot of the game.

Once the Jayhawks finally got on the board on a tying layup by Dajuan Harris after missing their first three shots, they got on a roll. They made their next six shots, and soon after that had a stretch of seven makes in a row. There were several highlight dunks throughout the game, and Kansas made 11 3-pointers.

“The first four minutes, everybody was a little nervous, little tight. We loosened up a little bit and started playing well," Braun said.

“We did a lot of really good things in the first half,” Self said. “I thought we shared it, defended, rebounded the ball pretty well, and after we kind calmed our nerves down a little bit, we were very efficient first half.”

Kansas (29-6) plays its second-round Midwest Regional game Saturday against ninth-seeded Creighton, which opened with a 72-69 overtime victory over San Diego State and will try to get to the Sweet 16 for the second year in a row.

John Walker III had 13 points for the Tigers.

Big 12 player of the year Ochai Agbagi had a relatively quiet night with 11 points for Kansas, but he had a short scoring outburst in the first half and his last points were a highlight play, scoring on an alley-oop pass from Harris, who finished with 12 points. Jalen Wilson had 11 points.

The Jayhawks led 47-19 after scoring five points in the final 4 seconds of the first half. It was their largest halftime lead in an NCAA Tournament game since they led by 29 over Marquette in the 2003 national semifinals.

“I didn’t think we played well there in the first half, but I thought in the second half we played, continued to fight and made some plays and looked more resembling the type of team that we had most of the time throughout the year,” Tigers coach Johnny Jones said. "Unfortunately, we ran into a team that’s very efficient, coached extremely well.

After Texas Southern got a putback layup from Joirdon Karl Nicholas with 15 seconds left in the half, Self called timeout.

Joseph Yesufu passed to true freshman Zach Clemence, who split through two defenders for a layup while being fouled with 4 seconds left. Clemence missed the free throw, but Jalen Coleman-Lands got the rebound and hit a half-ending 3-pointer from the right corner.

Agbaji had all seven of his first-half points by making three shots in row in a span of less than two minutes. He had a jumper, 3-pointer and then a layup that made it 14-7 before Braun's 3-pointer for the first double-digit lead with 12:43 left in the half.

The Jayhawks later had an 18-2 run in which Martin scored nine points, including a steal and breakaway dunk.

“I didn’t know Remy could dunk a basketball, so that was a big moment,” Self said. “The pass that he gave David in transition was pretty special.”

Martin had ignited that spurt with an emphatic bounce pass to David McCormack for a thunderous one-handed slam dunk and a 21-12 lead.

“Scoring is not what I came here for. Came here to change pace and help my teammates,” Martin said. “If I have an open look, I’m there to take it. If not, find these guys."

Texas Southern: It was the second consecutive March and the third NCAA Tournament appearance in a row in which the Tigers won a First Four game before falling in the next game — they beat Texas A&M-Corpus Christi 76-67 on Tuesday. Texas Southern has made six of the last nine NCAA tourneys.

Kansas: The Jayhawks are in their record 32nd NCAA tourney in a row. The three-time national champions are 110-48 overall in NCAA games and have won their last 15 tourney openers since losing to Bradley in 2006. They also fell to Bucknell in their 2005 opener, but those are the only first-round losses in their 32 straight appearances.

Kansas and Creighton have played in the NCAA Tournament only once, when the Jayhawks won 55-54 in 1974. Their only meeting since was another one-point victory for Kansas on Dec. 8, 2020.