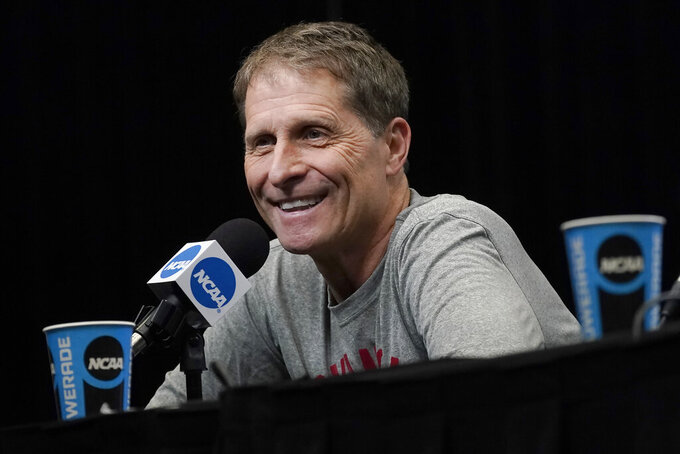 FILE - Arkansas coach Eric Musselman speaks during a news conference for the NCAA men's college basketball tournament in San Francisco, Friday, March 25, 2022. Musselman has been one of the nation's best at dipping into the transfer portal, at Arkansas and his previous stop in Nevada. (AP Photo/Jeff Chiu, File)

Eric Musselman has been one of the nation's best at dipping into the transfer portal at Arkansas and at his previous stop in Nevada.

Musselman is still adept at landing elite high school recruits — his 2022 class was second nationally — but adding quality transfers was a big part of the Razorbacks' consecutive Elite Eight runs.

“Veteran players through the transfer portal can have a immediate impact both as starters and as role players,” he said. “Much like NBA free agency, with college transfers there is a body of work and less projection on how a player's impact can be. Transfers have been through the rigors of college basketball and can add some experience both from a game playing standpoint and a culture standpoint.”

Musselman isn't alone in his thinking; most of the top-tier programs have used the transfer portal to their advantage.

The thought process has created a ripple effect in the recruiting world.

The transfer portal was created in 2018 to ease transfers from one school to another. Now that players don't have to sit out a year after transferring, a college version of free agency has spawned, enhanced even more by name, image and likeness compensation opportunities.

With more programs opting to add experienced players from the portal, the opportunities for the non-five-star recruits to play at high-major programs have dwindled. Players further down the recruiting rankings — usually past the top 75 — are not getting the same high-major interest as before.

Before the transfer portal, players that were maybe fringe high-major prospects could wait until the spring recruiting period and see their stock rise. Top programs desperate to fill out their rosters would often take a chance on a recruit, but now there's no need when they can add a transfer who's already proven himself.

In 2017, the year before the portal opened, three players ranked between No. 75 and 125 in the 247Sports composite committed to mid-major programs. Flash forward to 2022 and seven players in the same range ended up at mid-majors.

As those players drop down to mid-major programs, the players behind them drop farther down the line in the college hoops hierarchy.

"You see a lot of kids go underrecruited,” said Travis Branham, national basketball analyst for 247Sports. “A kid used to wait until the spring and, oh, the high-majors are going to come calling — that’s not the case anymore.”

The ease of the portal has also pushed coaches toward transfers.

With high school recruits, there's often multiple layers of involvement, from coaches to family and friends. Coaches also have to devote months or years of keeping in contact and traveling to watch recruits who ultimately end up choosing to go somewhere else.

The portal expedites the process. The players are more mature, usually know what they want and a decision typically comes quickly.

“Coaches actually seem to enjoy recruiting in the portal more than they enjoy recruiting high school kids,” Branham said. “You're dealing with a lot less (hassles), the recruitments are quick and you can figure out things quickly.”

The recruiting ripples from near the top of rankings spread down through college basketball.

Mid-majors that were losing players to high-majors needing to fill out rosters now are getting higher-quality — or at least higher-ranked — players not available to them in the past. The shift continues down to the smaller Division I schools, who suddenly find themselves in the conversation for recruits who never would have even looked their direction in the past.

“We're trying to get a couple of high school kids that before the transfer portal, we wouldn't even be talking to because they would be signed by those mid-majors receiving (poll) votes,” Northern Arizona coach Shane Burcar said. “The top 75 and down, Dukes, North Carolinas and Michigan States are holding off on those guys. Absolutely it's impacting high school kids.”