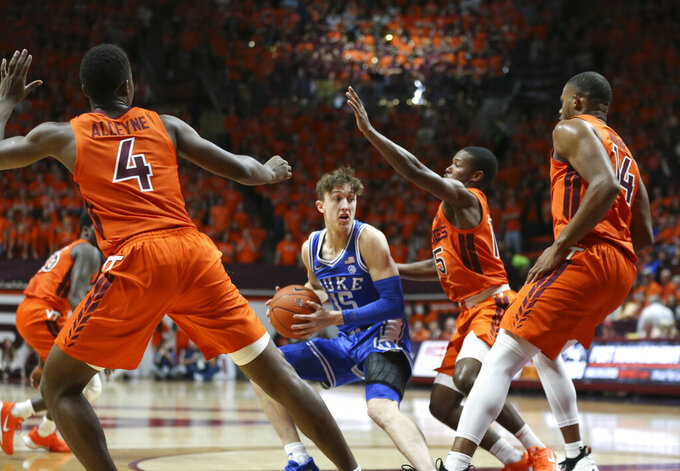 Duke's Alex O'Connell (15) is surrounded by Virginia Tech defenders during the first half of an NCAA college basketball game Friday, Dec. 6, 2019, in Blacksburg, Va. (Matt Gentry/The Roanoke Times via AP) 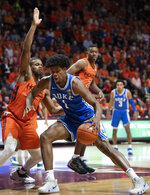 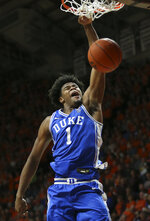 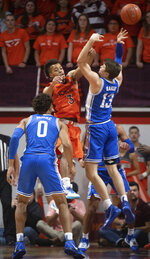 BLACKSBURG, Va. (AP) — Tre Jones was pleased that when No. 10 Duke fell behind early at Virginia Tech, the Blue Devils showed composure and gradually worked their way back.

Coach Mike Krzyzewski was glad he had Jones to lead the way.

“They follow his lead,” Krzyzewski said after Jones scored 10 of his 15 points in the second half as Duke rallied to beat the Hokies 77-63 Friday night.

On a team with many prominent freshman, the sophomore point guard said seeing his teammates respond in the right way was “huge for us tonight just like on Tuesday" when the Blue Devils won 87-75 at Michigan State. “Another big road game. A big crowd. In past years we've struggled here.”

Freshmen Vernon Carey Jr. and Wendell Moore Jr. added 12 points each for the Blue Devils (9-1, 1-0 Atlantic Coast Conference), who had lost three in a row in Cassell Coliseum. They used runs of 12-2 just after halftime and 12-3 a short time later to take command after trailing for almost the entire first half.

P.J. Horne scored 15 points to lead the Hokies (6-3, 1-1), who lost their third in a row and ended their three-game home winning streak against the Blue Devils. Wabisa Bede and Tyrece Radford added 12 points each.

The Hokies made 10 of their first 14 shots and led by 12 early, but Duke slowly climbed back. The early 12-2 run in the second half gave them their first lead, 50-47, since the opening minute. After Virginia Tech pulled even at 52 on Horne's 3-pointer with 11:10 remaining, the Blue Devils scored 12 of the next 15 points and gradually pulled away.

Jones had four in that latter burst, which ended with the Blue Devils ahead 62-55.

“Tre Jones is so disruptive. He's made great progress with his game offensively but he is a mean dude defensively,” Hokies first-year coach Mike Young said.

Duke: The Blue Devils came in averaging seven 3-pointers and had three by the time Carey scored his first point (9:24 into the game) and six by halftime. Virginia Tech had 10 field goals before the game was 10 minutes old, and it took Duke 15 minutes to make 10 shots. Five of them were 3s, though, to keep the score close.

Virginia Tech: Landers Nolley II is the Hokies' leading scorer (20 ppg) and is second on the team in assists. He had three first-half assists, each time feeding a teammate for an easy lay-in when the defense came toward him. But Nolley had an otherwise pedestrian night, finishing with seven points, eight rebounds, four assists and nine of their 14 turnovers. He also was called for a flagrant foul with the Hokies trailing 66-57 with 4:34 to play.

“I think they got up under his chin, and I didn't think he handled it very well,” Young said.

Carey arrived on a streak of seven double-doubles but played just 15 minutes and grabbed only five rebounds as Duke went with a smaller lineup.

The Blue Devils don't play again until Dec. 19 at home against Wofford.

The Hokies are at home against next Wednesday against Chattanooga.