True to form, Avenatti attacks Nike a day after arrest 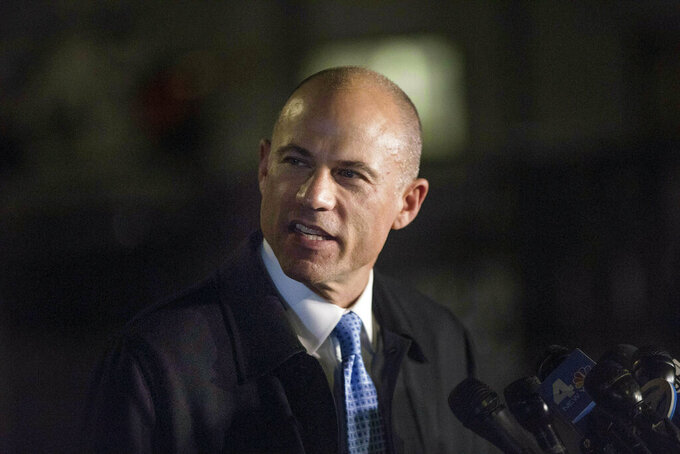 Attorney Michael Avenatti delivers remarks in front of federal court after his initial appearance in an extortion case Monday, March 25, 2019, in New York. Avenatti was arrested Monday on charges that included trying to shake down Nike for as much as $25 million by threatening the company with bad publicity. (AP Photo/Kevin Hagen).

NEW YORK (AP) — Attorney Michael Avenatti came out swinging Tuesday against Nike, accusing the shoemaker — without evidence — of "rampant" corruption mere hours after he was released from U.S. custody on charges he tried to extort up to $25 million from the company.

In a string of posts on Twitter — a medium he has often used to accuse others of wrongdoing — Avenatti claimed Nike has funneled "large sums" of money to elite student-athletes bound for top colleges.

Prosecutors haven't commented on whether Avenatti's information about Nike was accurate but said he crossed a line by trying to enrich himself with threats.

A Nike spokesman declined to answer questions about Avenatti's tweets. The company released a statement Monday saying it will "not be extorted or hide information that is relevant to a government investigation." It also said it has been cooperating with a federal investigation into NCAA basketball for a year.

Avenatti's tweetstorm came the morning after he was arrested and charged in two separate federal cases. In Los Angeles, he's accused of embezzling money from a client. In New York, prosecutors say he told Nike he would reveal damaging information about its dealings with a youth basketball team unless the company paid him millions.

Avenatti denied the charges in an interview Tuesday with CBS Evening News. He cited unnamed "legal experts," who he said contended that he was "well within the line as an aggressive attorney."

"People make threats all the time in connection with trying to settle a case," he said.

Avenatti's fame from the Daniels case made him a leading figure in the anti-Trump movement, with relentless cable news appearances, a hard-punching style and a knack for obtaining information about others' wrongdoing.

"Contrary to Nike's claims yesterday, they have NOT been cooperating with investigators for over a year," Avenatti tweeted. "Unless you count lying in response to subpoenas and withholding documents as 'cooperating.' They are trying to divert attention from their own crimes."

The company and Avenatti were referring to a recent federal prosecution in New York involving multiple coaches, sports business agents and allegations that the families of top youth basketball players were secretly paid thousands of dollars to attend certain colleges sponsored by the apparel company Adidas.

One defendant was a former Nike and Adidas employee and Amateur Athletic Union coach, Merl Code Jr., who was convicted last year of funneling illegal payments to the families of recruits to University of Louisville, University of Kansas and North Carolina State University.

Prosecutors did not accuse Nike of wrongdoing. Code ran Nike's elite youth basketball league, but by the time he was charged, he had left the company to work as a consultant for Adidas. In one wiretapped call, Code was recorded saying, "Nike schools pay, too," describing the practice of paying athletes as "just part of the space."

Avenatti suggested he had new evidence of wrongdoing.

At the trial, a government witness testified that he paid $15,000 in cash to the family of basketball star Deandre Ayton, now with the Phoenix Suns, in a failed bid to get him to attend a university affiliated with Adidas, only to see him attend Nike-sponsored University of Arizona.

Avenatti claimed in his tweets, without providing evidence, that Nike also made illegal payments to Ayton.

Ayton's agent did not respond Tuesday to an email seeking comment.

The school released a statement saying it was "unaware of any evidence that would support" Avenatti's allegations.

"Diligent inquiry last summer into the amateur status of our student-athletes revealed no indication of improper payments made to any student-athletes or their families," the statement said.

But he said Avenatti sought to take things to another level.

"You have a lawyer trapped in a corner," Heitner said, "and he's doing whatever he can to vindicate himself in the court of public opinion, where he seems to spend more time than the actual courtroom."