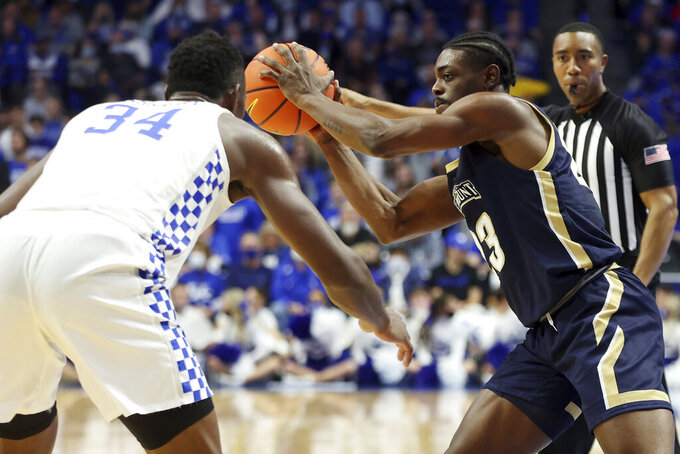 LEXINGTON, Ky. (AP) — Oscar Tshiebwe's rebounding drew so much attention that his offense was something of an afterthought.

That focus might change after the Kentucky forward showed a skill that was there all along.

Tshiebwe had a career-high 24 points with 16 rebounds, TyTy Washington scored 16 points and No. 13 Kentucky shot well for the second consecutive game to run away from Mount St. Mary’s 80-55 on Tuesday night.

Tshiebwe helped set the tone with contributions on both ends on the way to his third double-double to start the season. The West Virginia transfer — who came in averaging 20 boards per game — continued his strong rebounding and also made short and mid-range jumpers to finish 11 of 14 from the field and top his previous best of 21 points against Boston University on Nov. 22, 2019.

Tshiebwe took off from there, becoming the first Kentucky player with three consecutive double-doubles since PJ Washington in early 2019. Julius Randle achieved that feat over his first seven games in the 2013-14 season.

“If a big man is staying down there (in the lane), I know I’ve got to shoot," he said. "Most of the bigs I’m going to play, I believe they’re not going to be fast like me. That is a large advantage for me.”

Washington shot 7 of 12 with a couple of 3-pointers. Keion Brooks Jr. contributed 10 points and seven rebounds to help the Wildcats win the boards 41-27 and dominate the paint 46-16.

Opportunities were certainly there inside the arc as the Mountaineers limited the Wildcats' perimeter options. Kentucky succeeded nonetheless, hitting 4 of 7 from long range with Washington and Kellan Grady (eight points) each hitting a pair.

“I just feel like if I have an open shot, I’m going to shoot it," Washington said. "Today, the ball was just going in for me.”

Josh Reaves and Jalen Benjamin scored 11 points each for Mount St. Mary’s (1-3), which shot 34% and lost its second consecutive game.

Mount St. Mary’s: The Mountaineers went back and forth with Kentucky early on but steadily fell off the pace and were quickly left behind just seven minutes into the second half. They also struggled at the line, making 13 of 21. Their bench provided the lone bright spot, outscoring Kentucky's reserves 21-10.

Kentucky: The Wildcats followed almost the same pattern as against Robert Morris, sorting things out before erupting. Tshiebwe showed a lot of confidence in his jumper and proved he can also score away from the basket.