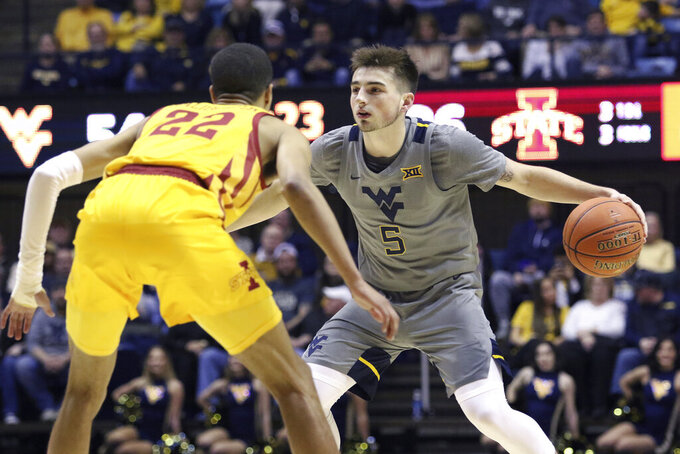 West Virginia guard Jordan McCabe (5) looks to pass the ball as he is defended by Iowa State guard Tyrese Haliburton (22) during the second half of an NCAA college basketball game Wednesday, Feb. 5, 2020, in Morgantown, W.Va. (AP Photo/Kathleen Batten) 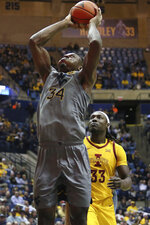 The freshman had 16 points and 10 rebounds, and No. 13 West Virginia breezed to a 76-61 victory over Iowa State on Wednesday night.

“He gets better every day,” West Virginia coach Bob Huggins said. “He wants to learn. He wants to get better.”

Tshiebwe is the Mountaineers' second-leading scorer at 10.7 points per game and the leading rebounder at 9.7. He has four games with at least 17 rebounds. This was his eighth double-double.

“Play hard,” Tshiebwe said. “Not everybody plays hard. If you keep playing hard, people are going to get tired, which is going to make it easier for you.”

West Virginia didn't necessarily play smart against the Cyclones. Huggins left the court agitated about his team's 19 turnovers and making just 50% of its free throws.

“To turn it over 19 times is ridiculous," Huggins said. “When guys play bad, they miss free throws. If you're a major college team, you don't go 12 for 24. Are you kidding me?”

The Mountaineers are next-to-last in the Big 12 from the free-throw line at 65%.

West Virginia never trailed. Five minutes into the game the Mountaineers built a lead that didn't fall below double digits.

“Our defensive effort the first five minutes was just really poor," Iowa State coach Steve Prohm said. "It was getting beat off the dribble. It was second-chance. It was just physicality around in the paint."

“Nothing's changed,” Matthews said. “You don't go away from the recipe. I'm still in the gym early mornings to this day.”

Matthews was the early catalyst Wednesday, scoring all 12 of his points in the first half. West Virginia made nine of its first 11 shots and finished 29 of 58 (50%) for the game.

Iowa State trailed by 24 points after halftime. The Cyclones were outrebounded 46-28, including 18-9 on the offensive end. West Virginia is eighth in the country in rebounds per game.

“I mean there's no question the physicality was a huge difference in the game,” Prohm said.

Iowa State: The Cyclones shot 40% from the floor and fell to 0-7 this season on the road.

West Virginia: The Mountaineers improved to 12-0 at home, seven of which have been by at least 20 points.

Harler had a season high for points on 5-of-9 shooting, including three 3-pointers.

“Chase has played really well," Huggins said. “We wouldn't be 18-4 without Chase.”