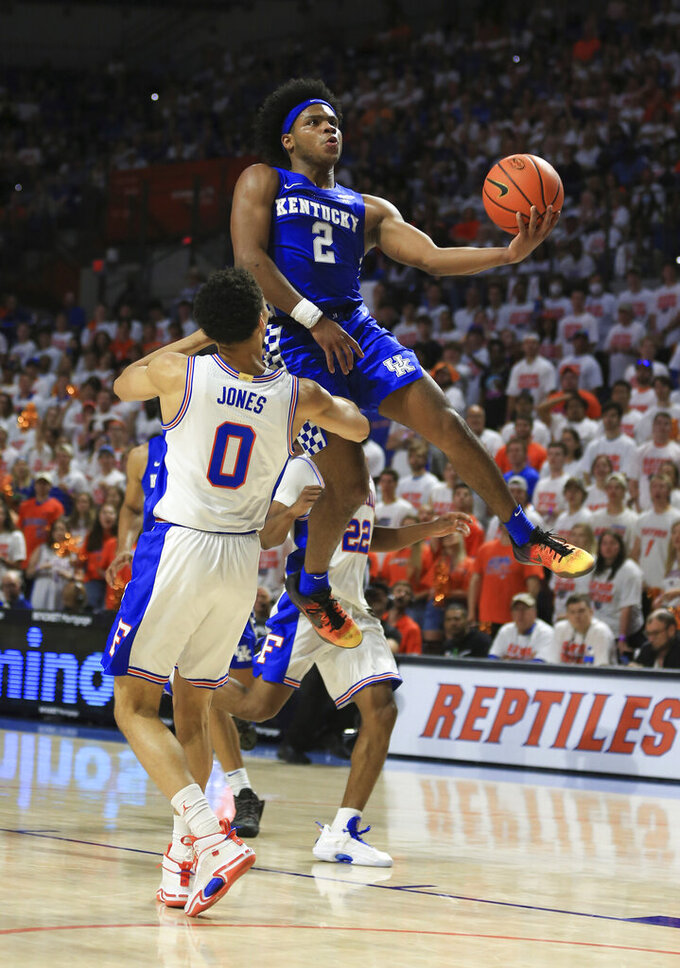 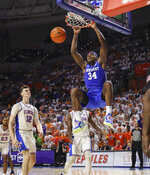 GAINESVILLE, Fla. (AP) — When Florida scored the first five points of the second half, Kentucky coach John Calipari immediately called timeout. He had one message for his seventh-ranked Wildcats: Throw Oscar Tshiebwe the ball.

They listened better than even Calipari could have imagined.

Tshiebwe finished with 27 points and 15 rebounds — his 13th consecutive double-double and 25th of the season — and Kentucky beat Florida 71-63 on Saturday to secure the No. 3 seed in next week’s Southeastern Conference Tournament.

“You be the star the next game,” Calipari told his guys.

This one belonged to Tshiebwe, who scored Kentucky's next 11 points after Calipari called that timeout and took over. He helped the Wildcats (25-6, 14-4 SEC) end a two-game road skid in league play and win their fourth straight in Gainesville.

They never trailed thanks mostly to Tshiebwe. The 6-foot-9, 255-pound forward and national player of the year candidate scored 17 of Kentucky’s 19 points over a 7 1/2-minute stretch spanning halftime. He responded with a dunk in the first half after Florida cut a 16-point lead to six and was at his best after the break.

The junior scored the team’s first 11 points of the second half — all in the paint while almost single-handily building a double-digit lead for the Wildcats.

Long before then, he already had locked up another double-double. His 25th leaves him one shy of the school record set by Dan Issel in the 1969-70 season.

“The things that he's doing haven't been been done in 50 years,” Calipari said, repeating the line for effect.

Tshiebwe made 11 of 16 shots and was perfect in five trips to the free-throw line. He added two blocks and three steals, including one that led to a three-point play.

“Sometimes I can't believe what I'm doing," Tshiebwe said. “How? This is impossible. I'm in college and everybody can play. ... The confidence right now is at a different level."

Sahvir Wheeler added 13 points for the visitors, and Kellan Grady chipped in 11.

Colin Castleton led the Gators with 23 points and 11 rebounds. Anthony Duriji added 10 points in his return from an ankle injury that sidelined him two games.

The Gators had hoped a sold-out home finale and senior day would provide extra motivation against one of the league’s top teams. But not even Keyontae Johnson’s somewhat return to the court helped.

Johnson, who collapsed during a game in December 2020 and hasn’t practiced or played since, got a ceremonial start. Johnson was on the floor for the first of two opening tips and left to a standing ovation after kissing the floor.

Calipari was among the thousands clapping and even hugged Johnson as he checked out of the game. Johnson changed back into street clothes and assumed his usual spot on the bench.

Kentucky could move back into the top five in next week's Associated Press men's college basketball poll, depending on what happens later Saturday.

Kentucky: Don't count the Wildcats out of getting a No. 1 seed in the NCAA Tournament. There's no doubt they have the depth and talent to win the league tournament in Tampa, which could push them ahead of Auburn for one of the four top seeds.

Florida: The Gators will need to win two or three games in the SEC Tournament to make a fifth consecutive NCAA field. It's a big ask for a team that has been so inconsistent all season.

Kentucky gets an extended break before opening play in the SEC Tournament on Friday.

Florida will play Thursday in the tournament and likely needs a deep run to make the NCAA field.