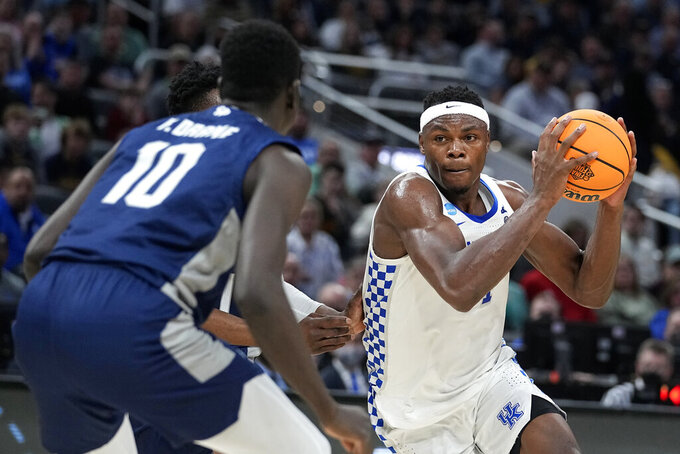 FILE - Kentucky forward Oscar Tshiebwe, right, drives to the basket ahead of Saint Peter's forward Fousseyni Drame (10) during the second half of a college basketball game in the first round of the NCAA tournament, Thursday, March 17, 2022, in Indianapolis. Tshiebwe was a unanimous selection to The Associated Press preseason All-America team, Monday, Oct. 24, 2022. (AP Photo/Darron Cummings, File)

The school announced before the game that the 6-foot-9 Tshiebwe (right knee) and guard Sahvir Wheeler (right leg) were out along with sophomore forward Daimion Collins (personal reasons).

Tshiebwe had a procedure on the knee last month and said on media day he anticipated being ready for the opener. The Democratic Republic of the Congo native did some pregame stretching and was honored with his Naismith Trophy as Player of the Year and a commemorative basketball for reaching 1,000 career points before taking his seat on the bench.

Tshiebwe averaged 17.4 points and a nation-leading 15.1 rebounds per game last season on the way to being named the Associated Press Player of the Year and sweeping the other five national awards as college basketball’s best player.

He was an AP preseason All-America selection this season. He said he returned to help Kentucky win a national championship and broaden his game ahead of next year's NBA draft.