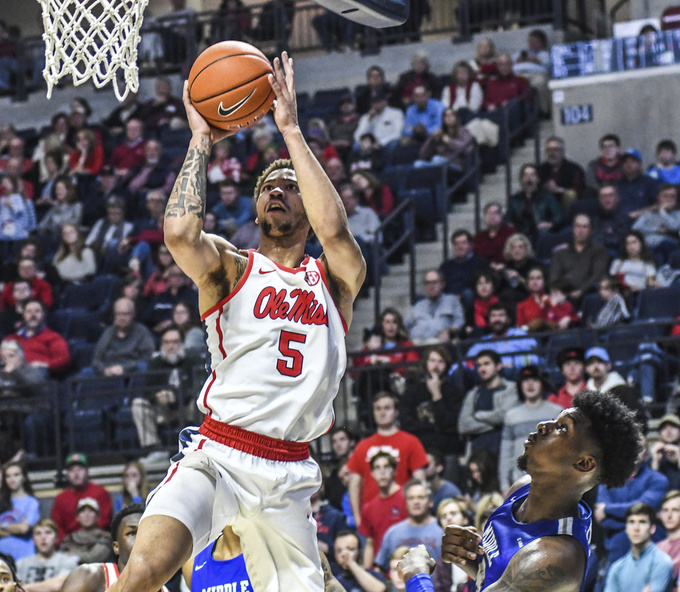 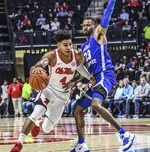 OXFORD, Miss. (AP) — A month ago, Breein Tyree’s play in Ole Miss’s season-opener was sluggish and scattered. Despite being a first-team SEC selection last year, Tyree scored only six points against Arkansas State, was 1 for 7 from behind the arc, and played only 25 minutes.

Tyree was dialed in on Saturday, scoring a career high 34 points and eight 3-pointers to lead Ole Miss to an 82-64 victory over Middle Tennessee.

“All week I’ve been shooting like that,” Tyree said. “So, I was just trying to keep it going, keep making plays like I’ve been making in practice.”

With his rocky start now firmly in the rearview, Tyree said he feels like he’s starting to feel more comfortable in the Rebels’ offense, and more comfortable letting his own talent take control of the game.

“The coaches had a meeting with me and just told me to stay aggressive,” Tyree said. “When there’s shots I can take, and they’re shots I can make, they trust me to make them.”

Ole Miss (7-3) shot 53% as a team against Middle Tennessee and had 23 assists, but Tyree’s performance dominated the day. This was his sixth 20-point game of the season and third in a row. His previous career high was 31 points at Georgia last season.

“He looked like the leading returning scorer in the SEC,” said Ole Miss coach Kermit Davis. “But I thought he really tried to defend today, and I thought he led in the huddles. That might not equate to 34 every night, but surely that gets you to where you have a great, great chance of winning.”

Middle Tennessee (4-7) moved the ball well inside but was an anemic 3-of-18 from beyond the arc and hit only 9 of 18 free throws.

Ole Miss opened the game on a 9-0 run and led 48-31 at half behind Tyree’s seven 3-pointers. They never trailed.

“He really got it out of our offense, he wasn’t trying to manufacture,” Davis said. “But yeah, when a guy makes a couple of buckets and gets going, I love the idea of letting a guy on a heater keep going.”

Middle Tennessee: After a hot start, the Blue Raiders have lost seven of their last eight games and continue to struggle beyond the arc. Getting senior big man Reggie Scurry back from suspension next week will help, but head coach Nick McDevitt had better find some additional scorers on this squad, and fast.

Ole Miss: The Rebels improved to 6-1 at home this season, and head coach Kermit Davis notched his second straight win over the team he coached for 16 seasons. There will surely be cake for Davis after this one — he turned 60 years old on Saturday. After the game, Tyree grabbed the scorer’s table microphone and led the arena in “Happy Birthday.”

Middle Tennessee will likewise have the week off before hosting St. Bonaventure next Saturday in Murfreesboro.

Ole Miss will have a week off before facing Southeast Louisiana next Saturday at a neutral-site game in Jackson, Miss.