UC Irvine dubs assistant as its own 'Sister Jean' in NCAAs 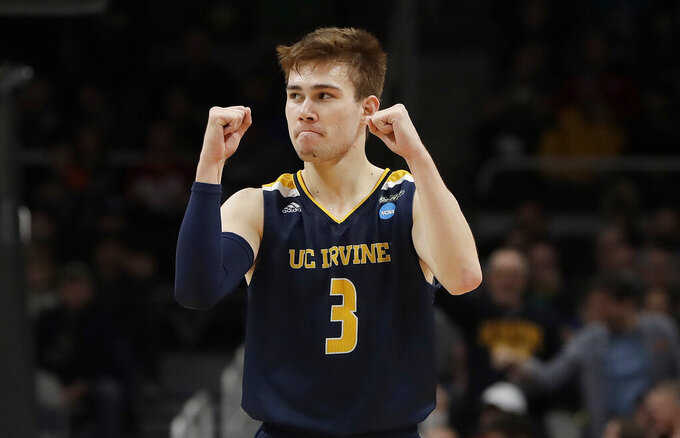 SAN JOSE, Calif. (AP) — When UC Irvine made the NCAA Tournament, coach Russell Turner believed his team had many of the same ingredients that fueled Loyola of Chicago's surprising run to the Final Four last year.

The Anteaters had an experienced team with a gaudy record but was missing only one ingredient: the good luck charm that provided inspiration for the Ramblers.

With no elderly nun with an engaging personality hanging around at a public school like UC Irvine, Turner got creative.

"They had a secret weapon that everyone remembers in Sister Jean and that we also have a secret weapon that no one knows about, and it's Uncle Blaine," Turner said. "It was a play on words, you know, as a way to entertain the crowd, but Blaine is special for our team and our staff."

"Uncle Blaine" is UC Irvine assistant coach Blaine Taylor, who won 380 games and made six tournament trips as head coach at Montana and Old Dominion and four more as an assistant at Stanford before joining the Anteaters in 2016.

After getting the nickname on Sunday, Taylor has heard from many old friends, amused that the 61-year-old basketball lifer is being compared to a 98-year-old nun. He was sent a picture of him and Sister Jean that he proudly showed off in the locker room on Saturday as the 13th-seeded Anteaters (31-5) prepared for their second-round game in the South Region against No. 12 seed Oregon (24-12).

"Maybe I'm a little bit of a good luck charm. I've been to lots of these tournaments," Taylor said. "If someone feels a little luckier or someone can show them what's around the corner down the trail, that's kind of a compliment. It's been kind of a fun thing for us to joke around about."

Sister Jean Delores Schmidt became a national sensation last March as she watched from a wheelchair as the Ramblers ran through the tournament as a No. 11 seed and went all the way to the national semifinals before losing to Michigan.

The team's chaplain, unofficial scout and eternal optimist was a natural on TV. She joked that she gave up losing for Lent, had a bobblehead made of her and even got to throw out a ceremonial first pitch at a Cubs game.

That's a high bar for Turner to meet but one his players believe he can achieve.

The Anteaters have a long way to matching the run Loyola made last year. They got off to a good start with the 70-64 upset of fourth-seeded Kansas State on Friday and are the lowest remaining seed in the tournament.

They are underdogs again in the second round against Pac-12 tournament champion Oregon but bristle at the Cinderella label.

"We don't see ourselves that way," guard Robert Cartwright said. "But we understand that might come with our seeding. But we look at ourselves as a high-level team that can compete with pretty much anybody, and that's what we're going to continue to show hopefully throughout the rest of the season."