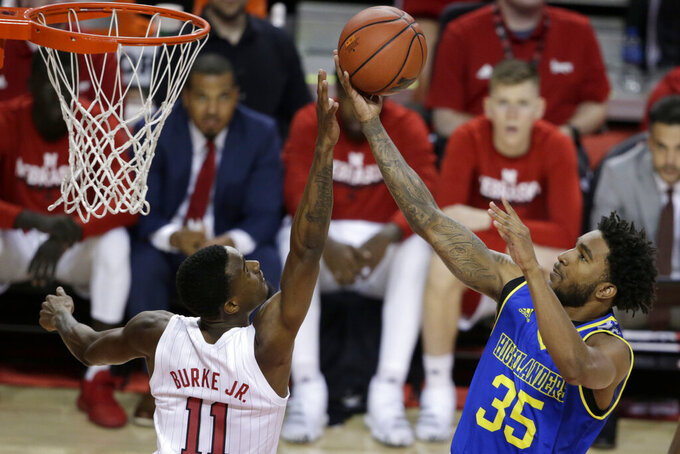 LINCOLN, Neb. (AP) — The enormity of the project Fred Hoiberg has undertaken at Nebraska hit him square in the face Tuesday night.

The new-look Cornhuskers lost 66-47 to UC Riverside, one of the bottom programs in the Big West Conference.

It marked the first time the Huskers had lost a season opener at home since 1980 and the beginning of what could be a long winter in Lincoln.

"You can use the excuse of we've got so many new faces and new players. We're not going to do that," Hoiberg said. "We got outplayed today. Adversity hit us in a huge way tonight. You can talk to your guys until you're blue in the face. It's going to hit you every time you step on the floor. What will define you will be how you handle it. We didn't handle it well tonight."

The Highlanders, who went 10-23 last season and have had one winning season since joining Division I in 2000, won for the first time over a Power Five opponent since beating California in November 2017.

"We're not going to come into an environment with this many people in the Big West, but this shows we can compete with anybody," second-year UCR coach David Patrick said. "We still have work to do. We have four guys sitting at home that aren't with us that will join us over the next couple of weeks. Their addition, with the group we have, I think good things are in store for this group."

Cam Mack had 11 points and nine rebounds and Matej Kavas added 10 for the Huskers, who shot 29 percent from the field and were 9 of 19 from the foul line.

UC Riverside made 7 of 9 3-pointers to start the second half, with McDonald hitting three in a row, and it was 59-40 when fans headed for the exits en masse at the under-4 timeout.

"First game. Not going to go crazy about it," the Huskers' Haanif Cheatham said.

The Highlanders, who got 14 points and four 3s from Dragan Elkaz, made 12 shots from beyond the arc and outrebounded the Huskers 49-29.

"I thought early on we had a good burst out of the locker room," Hoiberg said. "Our transition was excellent, defensively we were doing a good job of disrupting them and turning them over and that's what got us out in transition.

"Obviously, that changed and momentum shifted. Once the ball started going in the hoop for them, the defense wasn't as good. We pressed to try to get all the momentum back at once."

The 47-year-old Hoiberg, who coached Iowa State to four NCAA Tournament appearances from 2010-15, is back in the college game after three-plus seasons with the Chicago Bulls.

Hoiberg was at the top of wish lists for several schools looking for a new coach last March. There was a sentimental pull to Nebraska. He was born in Lincoln, his parents had ties to the university, and his maternal grandfather was head basketball coach from 1955-63.

As coaches who came before him can attest, this job isn't easy. The Huskers have never sustained success in basketball, are the only Power Five team to have never won an NCAA Tournament game and haven't won a conference title since 1950.

Hoiberg, who signed a seven-year contract valued at $25 million, offered a quick left-handed wave to fans as he walked into the arena before tipoff, and the Huskers made 6 of 7 shots to get out to an early lead in the first five minutes.

The other 35 minutes belonged to the Highlanders.

Nebraska hit only 4 of its last 22 shots of the half, Willburn scored nine points during a 20-5 spurt that pulled UCR even, and Elkaz swooped in for a putback just before the buzzer to put the Highlanders up 32-28 at the break.

"Their run caught us off guard," Cheatham said. "It was a little slap in the face. We didn't pick it up from there. One game doesn't define us. We still have got 29 more games. We'll be fine."

UC Riverside: The Highlanders capitalized on Nebraska's offensive ineptitude, getting stronger as the game went on. They'll get another crack at a Power Five opponent when they travel to Washington State next month.

Nebraska: It's going to take a while for a roster with 14 newcomers to coalesce. On this night, the Huskers looked every bit the team picked 13th in the Big Ten.