UCF and Temple hoping to give AAC 4 NCAA Tournament teams 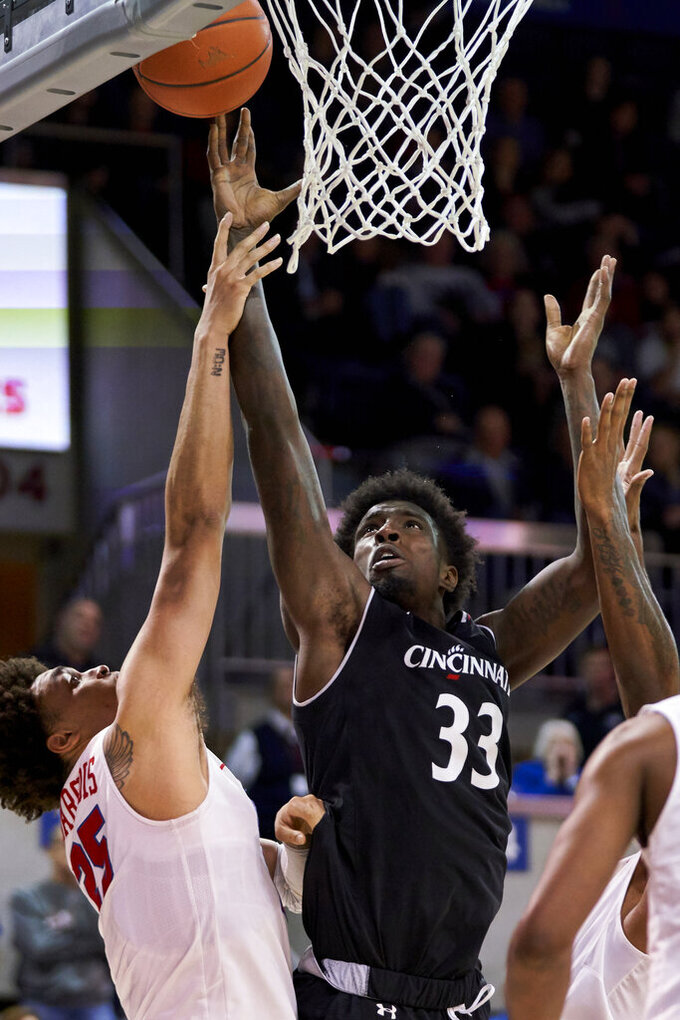 Cincinnati center Nysier Brooks (33) drives to the basket against SMU's Ethan Chargois (25) during the second half of an NCAA college basketball game Wednesday, Feb. 27, 2019, in Dallas. (AP Photo/Cooper Neill)

No. 8 Houston has been one of the nation's best teams all season, so its place in the NCAA Tournament is all but locked up.

No. 23 Cincinnati has just one bad loss, four total, and has won 12 of 13, putting the Bearcats in position to expect some extra March travel.

The two teams right behind the American Athletic Conference leaders may still have some work to do as the season winds toward March Madness.

Central Florida (21-6, 11-4) missed an opportunity for a resume-building win by losing at Cincinnati on Feb. 21. The Knights bounced back with a blowout win over SMU and beat South Florida by 12, winning two games that really would have put a dent in their NCAA Tournament chances.

UCF has another big resume-padding opportunity on Saturday, at Houston.

The Knights couldn't handle the Cougars in the teams' first meeting on Feb. 7, trailing by double digits well into the second half before rallying to within 77-68 by the final buzzer.

After Houston, UCF hosts Cincinnati and plays at Temple, games that could go a long way in deciding its postseason destination.

"We have all our opportunities we want to achieve to make ourselves known coming up ahead of us," UCF senior guard B.J. Taylor told reporters this week.

The Owls lost the rematch to Houston by seven, have losses to Penn and Tulsa, and missed an opportunity by losing at Memphis on Tuesday.

Temple faces Tulane on Sunday and closes out the season against UConn and UCF, games that won't be big resume builders. The Owls really can't afford any more losses and could need a good run in the AAC Tournament to take coach Fran Dunphy to the NCAA Tournament in his final season.

Minnesota. The Gophers (18-11, 8-10 Big Ten) faced what was essentially a must-win against Northwestern and pulled it out 62-50 after a stretch of five losses in six games. Next week offers two big resume opportunities with games against No. 14 Purdue and No. 17 Maryland. Win those and have a decent run in the Big Ten Tournament, the Gophers could make a case to go dancing.

Saint Mary's. The Gaels (20-10, 11-4 WCC) have won five straight to remain in contention for an at-large big and get a massive resume-building chance against No. 1 Gonzaga on Saturday.

Furman. The Paladins (23-6, 12-5 SoCon) avenged their worst loss of the season by knocking off Samford on Thursday, but can't afford a slip-up at Chattanooga on Saturday and may need a deep run in the conference tournament.

Butler. The Bulldogs (15-13, 6-9 Big East) missed on a resume-building opportunity in a loss to No. 10 Marquette last week and put a dent in their chances with a home loss to Providence on Tuesday. They still have games against Villanova, Xavier and Providence before the conference tournament starts.

Arizona State. The Sun Devils (19-9, 10-6 Pac-12) keep teetering at the edge of the NCAA bubble. Just when they look to be a safe bet for the field of 68, they drop an ugly game, as they did with Thursday's 79-51 loss at Oregon. Arizona State has wins over Kansas and Mississippi State on its resume, but most of its losses have come to teams unlikely to make the NCAA Tournament.

Lipscomb. The Bisons (22-6, 13-2 Atlantic Sun) bounced back from a resume-hurting loss to Florida Gulf Coast last week with a win over NJIT on Monday, but still have some work to do.

Oklahoma. The Sooners (17-11, 5-10 Big 12) missed a chance to impress the selection committee with a 17-point loss at Iowa State, but has two more chances against No. 15 Kansas and No. 16 Kansas State after playing West Virginia on Saturday.