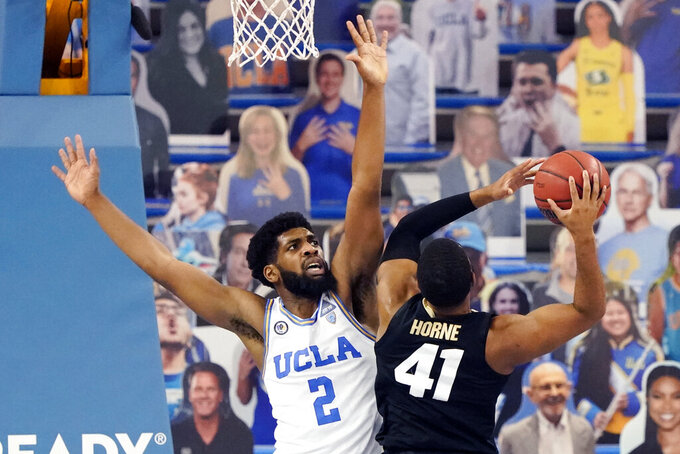 GAME OF THE WEEK: UCLA at Arizona, Saturday. The Bruins were the preseason favorite to win the conference and, after some shaky early moments, are playing like it. UCLA is tied with Oregon atop the Pac-12 at 3-0 and is coming off a 65-62 home win over Colorado. Arizona has been playing well, shaking off a road loss to Stanford with four straight wins. The Wildcats announced a self-imposed postseason ban on Dec. 29, but it didn't seem to bother them on the court, with road wins against the two Washington schools last week.

LOOKING AHEAD: Oregon returned to the AP Top 25 two weeks ago and moved up to No. 17 on Monday after beating USC and Stanford. The Ducks have a tough road trip this week with games against Colorado and Utah. ... Arizona State returns to the court this week for the first time since Dec. 19 after having three games shelved due to coronavirus issues. The Sun Devils host UCLA and USC this week. ... Oregon State postponed its games against Utah and Colorado due to COVID-19 issues.

INSIDE THE NUMBERS: Washington State leads the nation in shooting defense, holding teams to 34.2%. The Cougars face Stanford and California this week. ... The average scoring margin through 17 Pac-12 games is 10.5 points, including eight games decided by single digits. ... The Pac-12 went a combined 51-19 in nonconference games against Division I opponents.

PLAYER TO WATCH: Oregon G Chris Duarte. The senior guard from the Dominican Republic was named the Pac-12 player of the week after averaging 21 points, 4.5 rebounds and 2.5 steals in two wins last week. He's averaging 16.7 points and 4.8 rebounds this season.

ON THE WOMEN’S SIDE: Top-ranked Stanford passed big tests its past three games, beating No. 9 UCLA, No. 7 Arizona and Arizona State. The Cardinal get another one against No. 11 Oregon on Friday. The Cardinal have been ranked No. 1 for five straight weeks. ... Colorado and Utah play at the Southern California schools, and Arizona faces the Washington schools in a light week in the conference.