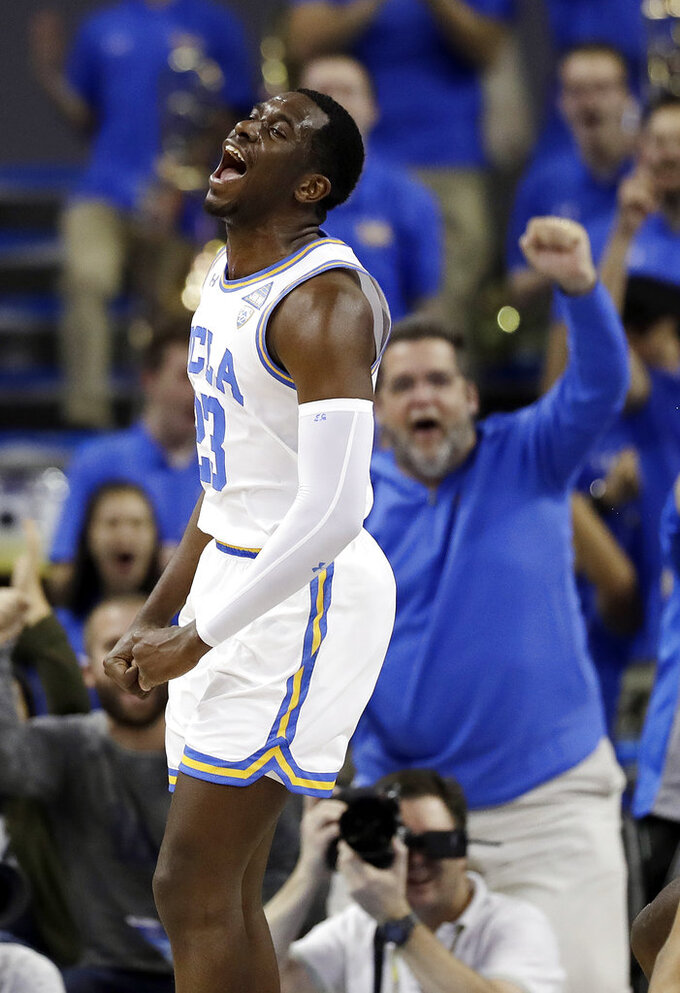 UCLA's Prince Ali reacts after scoring on a dunk against California during the first half of an NCAA college basketball game Saturday, Jan. 5, 2019, in Los Angeles. (AP Photo/Marcio Jose Sanchez) 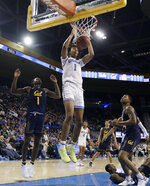 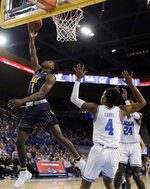 LOS ANGELES (AP) — Two-a-day practices during holiday break. An emphasis on team unity. It's a different time at UCLA these days.

Nowhere is that more evident than in the Bruins' results.

Kris Wilkes scored 18 points and UCLA pulled away in the second half to beat California 98-83 on Saturday, giving the Bruins a sweep on the opening weekend of Pac-12 play.

"We're all great players. You know when you hit adversity you need to find a way to get out of it," said reserve Jules Bernard, one of six Bruins in double figures with 12 points. "I don't think we were working as hard as we possibly could earlier."

They are now under interim coach Murry Bartow, who replaced Steve Alford after he was fired on Monday amid a four-game skid. Bartow has had the players practicing twice daily and lifting weights during their break from classes.

"It all starts in practice. We're all happy for each other. We're like brothers," said Moses Brown, who had 16 points and nine rebounds. "We all want the best for each other."

Chris Smith had 15 points and reserve David Singleton had a second straight career high with 14 points for the Bruins.

Bartow has the Bruins playing a fast-paced style that is drawing cheers instead of boos inside Pauley Pavilion. Their points were the most the team has scored this season.

"This pace sort of fits our playing style a little more," Bernard said. "We're active scorers and like to get the ball out and run. When we have that sort of freedom we play more like ourselves."

Darius McNeill scored 23 points to lead Cal. Justice Sueing added 18 points and nine rebounds. Sueing made all eight of his free throws, while the Bears were 21 of 25 from the line.

"Guys think that their starting positions are something that is given to them. I wanted to do something different," Jones said. "The guys that started have been working hard and giving us great things in practice."

After Cal opened a seven-point lead to start the game, the Bruins settled down. They ripped off 10 points in a row to take the lead for good. Prince Ali's one-handed dunk off Singleton's steal closed out the first half with the Bruins leading 50-42.

California: The Bears need to regroup after giving up 82 points in a loss at USC and 98 to UCLA. After having just two games with double-digit turnovers last season, they committed 19 against the Bruins.

UCLA: The Bruins are playing at a faster speed under Bartow and they appear much more energized. They've topped 90 points in both games under him. Their next test comes with a three-game road trip to the Oregon schools and rival USC.

The Bruins committed 22 turnovers — two short of their season high — and Bartow sees it as a result of their sped up play.

"We're trying to run on makes and misses," he said. "A lot of things we've got to clean up."

Connor Vanover tied his career high with 10 points and four rebounds in his second game since returning from a concussion and broken nose on Dec. 15. Against USC on Thursday, the 7-foot-3 forward had 10 points and three blocked shots.

"Honestly, I was pretty fatigued," he said. "I just have to get my minutes back up."

The Bears didn't have guard Paris Austin who got hurt in practice on Friday. He had 13 points, five rebounds and six assists against USC.

"We turned the ball over 19 times. You don't do that with him in the lineup," Jones said.