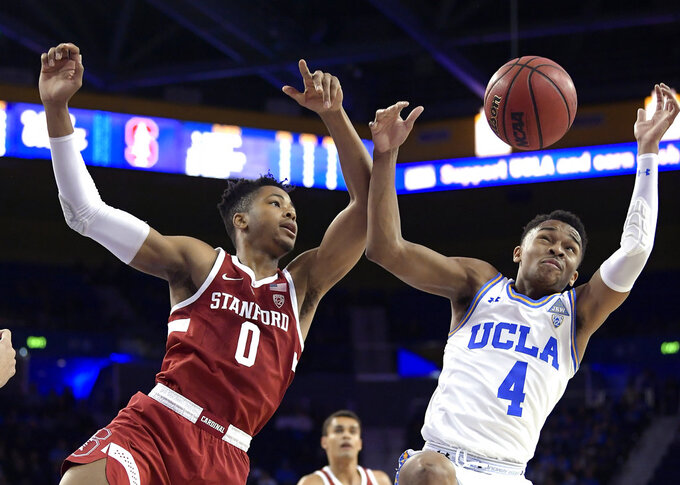 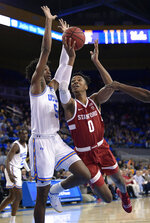 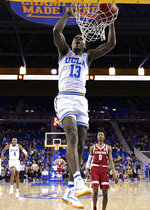 LOS ANGELES (AP) — Mired in a four-game skid and having fired its coach in-season for the first time in the program's 100-year history, UCLA went back to the past to right itself.

"Tyus gave a really emotional talk. What it means to put the UCLA uniform on and the way you've got to look, act and play," Bartow said. "He talked about the tradition and history here. I certainly think that had an effect on them."

Freshman Moses Brown had 17 points and 10 rebounds, and UCLA routed Stanford 92-70 on Thursday night in the teams' Pac-12 opener.

The Bruins (8-6, 1-0 Pac-12) began the week in turmoil and celebrated in a raucous locker room after their third-highest scoring game of the season produced their first win in nearly a month.

Bartow took the helm of a program his late father Gene coached for two seasons in the mid-'70s. Gene Bartow lost his UCLA debut against No. 1 Indiana 84-64 on a neutral court on Nov. 29, 1975. The Bruins then won their next 11 games, including 10 at home.

"My dad passed away seven years ago today so it's a little emotional for me to think about," said Bartow, his voice hoarse. "I miss my dad."

After just three practices under Bartow, the Bruins looked crisp and energized in the nationally televised game. Their defense and ball movement improved from last weekend's 15-point home loss to Liberty that sealed Alford's fate in his sixth season.

The animated Bartow proved a stark contrast to the low-key Alford. He stalked the sideline, barked instructions and waved his arms. The 57-year-old coach grabbed the arms of players he wanted in the game and pushed them toward the scorers' table.

"I love Bartow's energy in practice. He does a lot to motivate us," Brown said. "We had more energy, we were playing up and down and were having a good time. He emphasized us just looking like a team and valuing each other."

Although Pauley Pavilion was just over half full at 8,026, as it was for much of Alford's tenure, the same fans who booed the Bruins last weekend responded with the loudest cheers of the season.

Jaylen Hands added 15 points. Prince Ali and Kris Wilkes had 14 points each, and David Singleton had a career-high 13 points off the bench for the Bruins, who owned a whopping 56-30 edge in the paint and had seven steals that keyed their fast break.

KZ Okpala was the only player in double figures with 22 points for Stanford (7-6, 0-1) in its 13th straight loss at UCLA. The Cardinal opened league play on the road for the first time in six years.

Stanford got within four to start the second half on four straight points by Okpala. His steal and dunk drew the Cardinal to 48-42 with 13 minutes left.

But the Bruins took off from there, owning a double-digit lead for most of the rest of the game.

"We just had a lack of discipline, lack of toughness," Stanford coach Jerod Haase said. "The last 20 minutes we couldn't guard."

Brown had consecutive dunks and a few minutes later Wilkes and Ali had back-to-back jams that ignited the crowd and pushed UCLA's lead to 18 points.

The Bruins ran off 10 straight points with under four minutes remaining that produced their largest lead of the game, 88-61.

UCLA broke open a tight game with a 20-4 run that produced a 30-16 lead, its largest of the first half. Five different players scored during the spurt that began with a dunk by Brown off his offensive rebound and ended on a dunk by Wilkes off his own steal.

The Cardinal answered with a 10-0 run to get within four. Chris Smith missed a windmill dunk, but the Bruins went into the break leading 38-32.

Stanford: The Cardinal is one of just four teams in Division I that has started all freshmen and sophomores this season. Through the first 12 games, they accounted for 82 percent of Stanford's scoring and 79 percent of its rebounding. Stanford will go as far as the youngsters will carry the program, with just four players on the roster having at least two seasons of experience.

UCLA: The coaching change apparently re-invigorated the Bruins, who drew loud applause for their spirited defense. Bartow has said the NCAA Tournament remains within reach, but UCLA has little margin for error even in a weakened Pac-12. Next week the Bruins open a three-game road trip, their longest of the season.

Smith got his first career start in his 47th game. He had seven points, eight rebounds and three assists.

"I'm a fan of his," Bartow said. "He's a hard matchup and he's a versatile guy and he's really athletic. I'll be really surprised if one day he's not playing in the NBA."

Alex Olesinski made his season debut for the Bruins after missing the first 13 games. The redshirt junior forward sustained a stress fracture in his right foot in late September. He entered late in the first half and was scoreless with one steal.

Stanford's Josh Sharma came back to earth after his first career double-double against Long Beach State last weekend. The senior had career highs of 23 points and 18 rebounds in the seven-point win. Against UCLA, he was in foul trouble and limited to six points and six rebounds.

Former UCLA great Bill Walton worked the game for ESPN and was asked by his partner Dave Pasch who should be the next Bruins coach.

Pasch pointed out that the former president wasn't going to coach.

Walton is known for his off-the-wall commentary.

Stanford: After two days off, the Cardinal visit Southern California on Sunday.