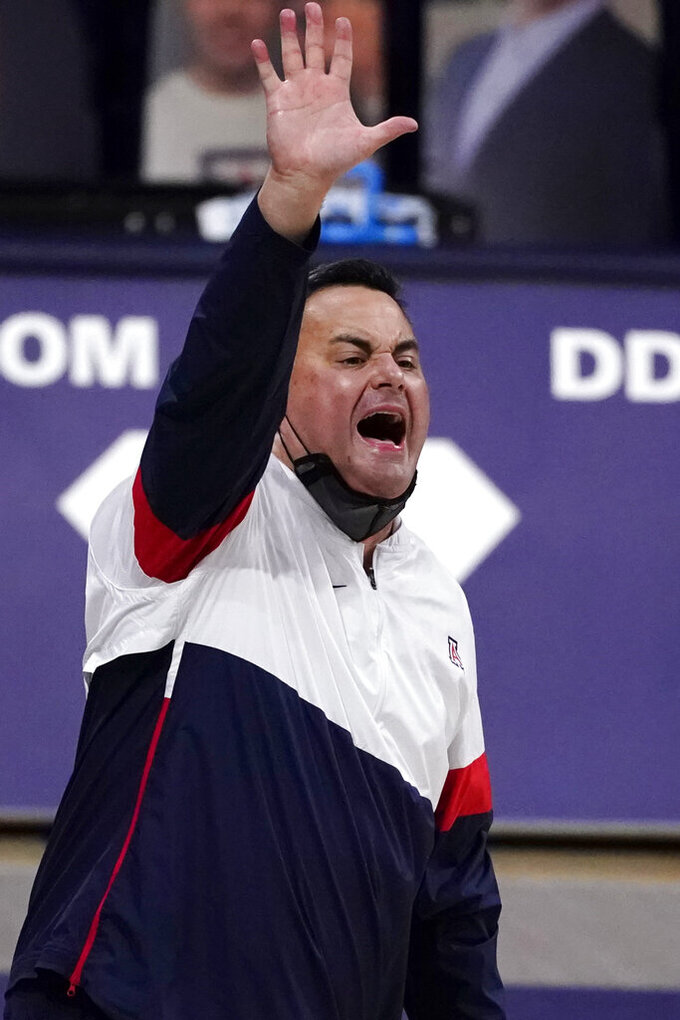 Arizona head coach Sean Miller calls out a play against UCLA during the first half of an NCAA college basketball game, Saturday, Jan. 9, 2021, in Tucson, Ariz. (AP Photo/Rick Scuteri) 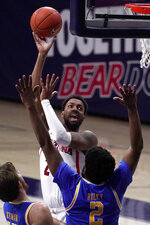 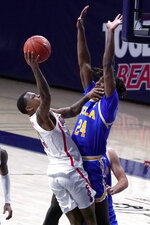 TUCSON, Ariz. (AP) — UCLA suffered a huge blow when Chris Smith went down with a torn ACL on New Year's Eve and is still trying to figure out how to play without its star guard.

Alone atop the Pac-12 after a rare desert sweep, it seems the Bruins have adapted pretty well so far.

Tyger Campbell scored 22 points, Johnny Juzang added 16 and UCLA completed a sweep of the Pac-12's desert schools with an 81-76 win over Arizona on Saturday night.

“It just shows the guys are on this team, everybody is willing to do what it takes to win and everybody really wants to win," Juzang said. “We have slip-ups and mistakes, but everybody on this team really does want to win.”

UCLA (9-2, 5-0 Pac-12) needed overtime to beat Arizona State on Thursday and finished off the sweep by shutting down Arizona in the second half.

The Bruins went up eight midway through the second half and held the Wildcats (9-3, 3-3) to one field goal over a key four-minute stretch late to remain alone atop the Pac-12.

UCLA is off to its best conference start since opening with five straight wins in 2012-13 and has won four straight at Arizona. The Bruins have won all three games since Smith went down against Utah.

“We’re a team that can still get better,” UCLA coach Mick Cronin said. “We’ve got a lot of guys on the improve and we've got different guys that are making plays for us.”

Arizona had been on a roll, completing a road sweep of the Washington schools last week. The Wildcats are now searching for answers after following up a home loss to Southern California on Thursday with another close defeat to UCLA.

James Akinjo had 25 points and eight assists to lead Arizona after missing all of his nine shots against USC.

“We are a horrible defensive team,” Arizona coach Sean Miller said. “We played against two very good teams, but that's who you judge yourself against. This team has some great moments on offense ... but we can't get the value out of that because we have no answer on defense.”

Two of the Pac-12's top offensive teams played like it in their first of two meetings this season.

The Bruins and Wildcats traded baskets early in the first half before UCLA used a 12-0 run to go up seven. Campbell, playing on his birthday, had 14 points at halftime — 12 straight at one point — and UCLA shot 15 of 25.

Arizona made its final five shots and went 16 of 31 overall tie it at 41-all.

The second half turned into a grind, nearly every possession a fight for space.

UCLA held Arizona without a field goal for more than five minutes to push the lead to 62-54 midway through, but the Wildcats clawed back.

The game remained lose until the closing minutes, when UCLA clamped down on defense. The Bruins didn't hit a field goal over the final 4:38, but harassed the Wildcats enough to close it out.

“Obviously, we've got to get better,” Akinjo said. “We've got to find a way to finish.”

UCLA will likely move into the AP Top 25 on Monday after pulling off a difficult road sweep of the Pac-12's desert schools.

Arizona had been on a roll until the Southern California schools came to town. The Wildcats now have a big uphill climb in the Pac-12.

Arizona guard Jamarl Baker did not play in the second half after suffering a hand injury. Miller said Baker is expected to get an X-ray Saturday night.

Losing him would be a big blow to the Wildcats. Despite struggling in recent games, Baker is Arizona's second-leading scorer with 12.7 points per game, with 33- and 29-point games already this season.

Juzang was a high-level recruit when he arrived at Kentucky two years ago, but opted to transfer to UCLA after one season in Lexington. The 6-foot-6 guard had to sit out last season under NCAA transfer rules and has been a solid contributor so far for the Bruins.

Juzang has scored in double figures five times in seven games and finished Saturday's game 5 for 10 from the floor, 3 for 4 from the 3-point line.

“He goes from not getting in to starting and playing 30 minutes a game,” Cronin said. “It's almost like he's a freshman out there, but he's just going to get better as the season goes on.”