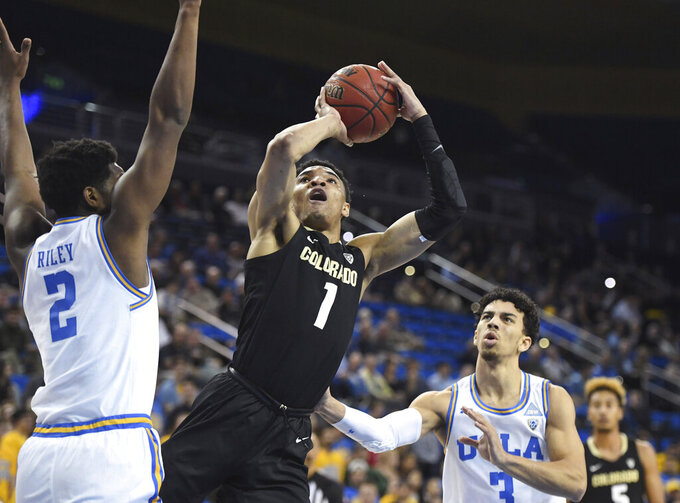 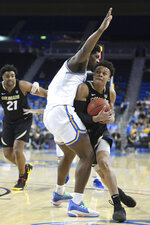 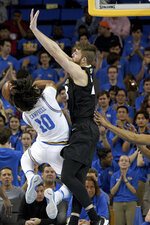 LOS ANGELES (AP) — Coming off a blowout loss at ranked Oregon last week might have been enough to derail a young UCLA team.

Chris Smith scored a career-high 30 points, making 13 of 15 free throws, Jaime Jaquez Jr. added 13 points and seven rebounds, and Prince Ali had 11 points for the Bruins (11-10, 4-4). They led by 15 points early in the second half and held off Colorado's repeated runs that cut the Bruins' lead to two points.

“Oregon was a rough game,” Smith said. “Tonight was definitely a confidence booster. It shows us and everyone else that we can hang with some of the best. We got a really big win.”

McKinley Wright IV scored 11 of his 14 points in the second half and Evan Battey added 14 points for the Buffaloes (16-5, 5-3), whose two-game winning streak ended. Wright scored seven of their final 11 points on a 3-pointer and four free throws.

“UCLA just out-toughed us,” Buffs coach Tad Boyle said. “This team really has heart, but the last two games we got punked.”

Colorado ran off 12 straight points early in the second half to close to 42-39. Smith came up with crucial baskets when the Buffs twice got within three points.

The Buffs used full-court pressure in the last couple minutes when they were down 11. Wright got fouled on two straight possessions and made four free throws to leave Colorado trailing by five. With 50 seconds left, Wright stepped out of bounds on the baseline, turning the ball over.

After making their first 20 free throws, the Bruins missed 4 of their next 5 in the game's final minute.

“I just knew I hadn't missed a free throw, then I smoked two in a row,” Smith said.

But Smith restored order, making two free throws with 14 seconds to go that kept the Bruins ahead 70-64. Smith's nine rebounds helped the Bruins own a 39-29 edge on the boards.

“We have to take care of things like rebounding,” Battey said.

The Buffs had just one team offensive rebound and 10 rebounds overall in the first half.

“This shows that UCLA was tougher,” Boyle said. “When you lose the rebounding game, it's tough to win.”

The Bruins controlled the first half when they shot 45% from the floor and led 39-27. They were better on the boards, in the paint and off the bench in putting together runs of 14-0 and 9-0. The Buffs were held without a field goal over the final 4 1/2 minutes when they made just four free throws.

Colorado: The Buffs will try to gain a weekend split of their second Pac-12 road trip, like they did last weekend at the Arizona schools. But they'll need Wright to get back in the offensive flow earlier in the game.

UCLA: The Bruins beat a ranked team for the first time in three tries this season, which should bolster their confidence heading to the Arizona desert next week. They lost by 21 points at No. 12 Oregon and by 13 to then-No. 3 Michigan State in November.

There was a moment of silence before the game to honor Kobe Bryant, his daughter Gianna and the seven others who died in a helicopter crash last weekend. The public address announcer noted that Bryant was a friend to the UCLA men's and women's basketball programs. He and Gianna had attended games in recent years.

UCLA: Hosts Utah on Sunday in the first of five home games in February.