UCLA at No. 25 Oregon highlights quiet week in the Pac-12 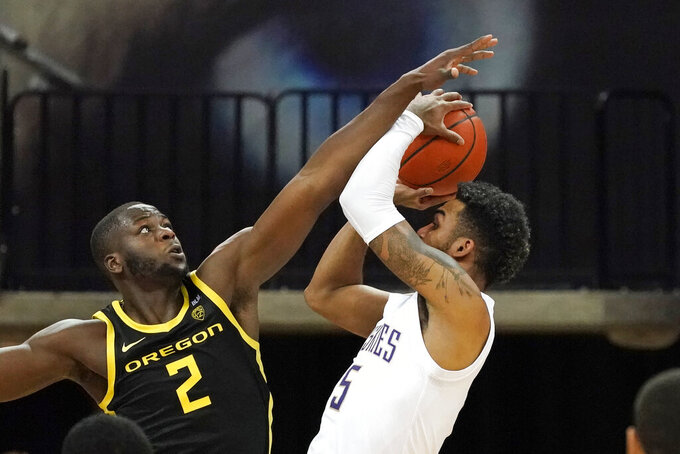 Oregon's Eugene Omoruyi (2) defends against a shot by Washington's Jamal Bey during the second half of an NCAA college basketball game Saturday, Dec. 12, 2020, in Seattle. (AP Photo/Elaine Thompson)

GAME OF THE WEEK: UCLA at No. 25 Oregon, Wednesday. The Ducks (6-1, 1-0 Pac-12) moved back into the AP Top 25 this week after stretching their winning streak to six games with wins over San Francisco and Portland. Oregon has won 26 straight home games, the fourth-longest winning streak in Division I. UCLA (5-2, 1-0) was No. 22 in the preseason poll, but dropped out after an opening loss to San Diego State and needing three overtimes to beat Pepperdine. UCLA is coming off a 77-70 loss to No. 23 Ohio State.

LOOKING AHEAD: The Pac-12 has a light slate of games during the holiday week, with just seven games, none after Wednesday. Colorado and Arizona play the only conference games in the next week, facing off Monday at McKale Center. ... Washington State, at 7-0, is off to its best start since opening 14-0 in 2007-08. The Cougars face Northwestern State on Wednesday with a chance to finish the nonconference season undefeated.

INSIDE THE NUMBERS: Colorado won three games last week by an average of 34 points and climbed 34 spots in the KenPom.com ratings to No. 24. ... Stanford's Oscar da Silva was named the Pac-12 player of the week after averaging 26.5 points and 8.0 rebounds while shooting 71%. The Cardinal don't play this week. ... California's Matt Bradley leads the Pac-12 in scoring at 19.1 points per game.

PLAYER TO WATCH: Ethan Thompson, Oregon State. The senior guard leads the Beavers with 19 points per game — second in the Pac-12 — while averaging 4.2 rebounds and 3.5 assists.

ON THE WOMEN’S SIDE: The Pac-12 women have just two games this week, both on Wednesday: Idaho at No. 6 Arizona and Long Beach State at Southern California. ... The Pac-12 is 21-4 in nonconference games. ... The conference had four teams in the AP Top 25: No. 1 Stanford, Arizona, No. 8 Oregon and No. 10 UCLA. ... Stanford coach Tara VanDerveer passed late Tennessee coach Pat Summit for most wins in women's college basketball history, then became the first to reach 1,1000 wins with a victory over UCLA.