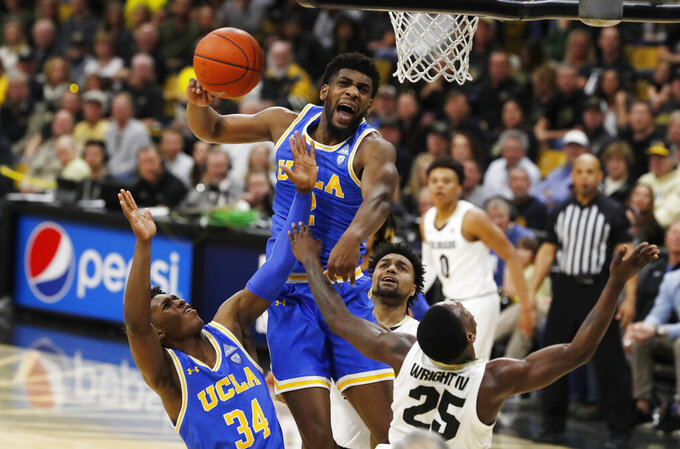 BOULDER, Colo. (AP) — The NCAA Tournament was unlikely for UCLA four games into the Pac-12 Conference schedule. With three games to go in the regular season, the Bruins are making a case to get there.

"All that stuff takes care of itself if you win games," coach Mick Cronin said.

UCLA added another solid win to its resume, rallying from nine down to beat No. 18 Colorado 70-63 on Saturday. The Bruins tied the Buffaloes atop the Pac-12 standings.

"This is surreal. To come in here and quiet that big huge crowd and get a win on senior night? That’s surreal," said Chris Smith, who had 14 points and a career-best four 3-pointers.

The Bruins started 1-3 in the conference but have surged to the top after going 2-0 in the Rocky Mountain region in their last trip out of Los Angeles before the Pac-12 tournament in Las Vegas next month.

"Obviously it’s a big win to come on the road to get a sweep of Utah and Colorado but we’re just taking it one game at a time," Campbell said.

McKinley Wright IV had 20 points for Colorado, which sent its two seniors off with a loss in the final home game of the season.

The Buffaloes (21-7, 10-5) missed a chance to retain sole possession of first place in the league. They have three games left, all on the road, but will need to sweep and get help to capture their first regular-season Pac-12 title. Two of their five losses have come against the Bruins.

On Saturday, UCLA stunned the sellout crowd of 11,214 at the CU Events Center.

"This one stings because it was senior night," Colorado coach Tad Boyle said. "Shane (Gatling) and Lucas (Siewert) deserve better than they got from the team tonight, and their coaches."

Colorado led 50-41 with 12:34 remaining but missed 10 straight shots and had only three free throws over the next 9:53. UCLA capitalized with a big run, scoring 14 straight in one stretch.

"It's senior day, they're playing for the Pac-12 title, it's huge," Cronin said. "Nine down with 12 to play, on the road against a great team. They're playing all juniors and seniors, you're playing freshmen and sophomores and you're able to pull it out? It's monstrous."

UCLA: The 9-2 stretch has put the Bruins in position to contend for the conference title but they'll likely need to sweep their remaining games. Fortunately for them, the last three are all in LA — home against Arizona and Arizona State and at Southern Cal in the final game.

UCLA freshman Jaime Jaquez Jr. missed the front end of a 1-and-1 with 1:24 left, giving Colorado a chance to tie it with a 3-pointer. Jaquez got some jeers from the sellout crowd, but he quieted the arena when he hit a 3-pointer with 58 seconds remaining to put the Bruins ahead by six.

"I was just thinking I've got to hit this shot (after) I missed the free throw," Jaquez said. "I wasn't paying attention to the crowd but they were telling me things after. I must be their favorite player or something."

Colorado: At Cal on Thursday night.